Where ordinary people's furniture came from

Although my mother talked frequently about her childhood in the early 1900s, she never once mentioned buying furniture. If she wanted to refer to a particular piece of furniture, it was, "That ... that came from 'Aunt So-and-so'."

What this meant was that the piece of furniture concerned was a hand-me-down of some sort, and I am sure that this was typical of the time on the Victorian housing estate where money was tight. My grandfather was on record as saying, "If you only have two sticks [of furniture] someone will take it before you're cold in your grave."

Furniture was also adapted by the man of the house. In my family today is an elegant hall stool that my grandfather made from a grand piano that had seen better days and had been thrown out from one of the big houses. These big houses of wealthy families either bought in antique furniture from dealers and auction rooms, inherited it or brought in local carpenters to make what was wanted. 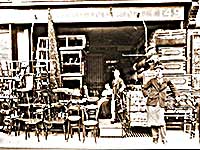 Furniture shop in year 1900 at 149 old Street London courtesy of Derrick Lockey. Tap/click for a larger version which shows details of the types of furniture on sale

Derrick reports that the shop in the photo bought and sold furniture, which meant that it was essentially a second-hand dealer.

However, the photo does suggest that it also sold, or could get in, new furniture because larger image shows an advert for mattresses with firm bases. The brand of the mattresses is unclear even in the larger version.

Almost certainly the shop would also have been able to direct customers to carpenters who would make furniture to specific requirements.

The shop was typical of its time in that goods were piled high outside to display and even hung outside on hooks. There is a hanging second-hand carpet and empty hooks and a hanging rail. Presumable whatever was hanging from these had been removed for the photo so as to show inside the shop.

Auction houses or auction rooms are places were auctions are held. The photo shows that Pearsons auction rooms in the early 20th Century had their sales every Thursday. The rest of the week, the staff would be meeting people who wanted to sell something, called 'putting it up for auction' and doing the administration. The photo shows that Pearsons was mainly concerned with auctioning furniture.

In advance of the auction, prospective customes had the chance to look round at what was to be auctioned and then, on auction day, to bid for it against other prospective buyers. 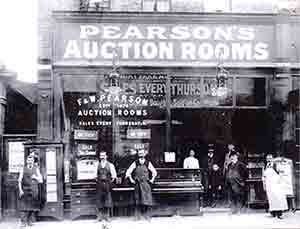 Auction rooms, early 20th Century, courtesy of Al Smith. Tap/click for a larger version which shows details of what is up for auction.

Auctions were popular as it was a way for people, the sellers, to sell unwanted goods and for buyers to get what they hoped would be a good deal.

The furniture in the photos reminds me of the hand-me-downs that I knew as a child in the 1940s.

There was no plastic then, and, relatively speaking, wood was cheap. Such furniture would have been manufactured in the 1930s or before, as only essentials were produced during wartime.