Because runner beans were and are so easy and prolific to grow in the UK, they formed a significant part of large family menus during mid to late summer. In years gone by, though, the gadget for preparing them, which I describe on another page, was of course not available. The stringing and slicing had to be done with a sharp knife and was not a quick process.

The string of a runner bean 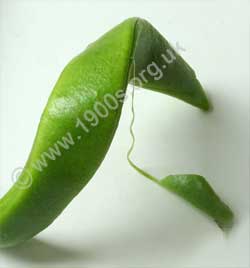 The string on a runner bean left too long before picking

Because families tended to be so large, quite a number of beans were required for each meal and I suspect, therefore, that the beans were allowed to grow much larger than I recommend on the gadget page.

This posed a problem. It was to remove what was called the 'string' at the sides of beans which developed as they aged.

As a child, I clearly remember trying to eat 'stringy' beans which had not been sufficiently carefully prepared. These string would not chew up into nothing and the only solutions when finding one in the mouth was either to chew it into a ball and swallow it like a pill or, as unobtrusively as possible, to remove it to the side of the plate in the hope that whoever prepared the meal wouldn't notice.

Removing the strings of runner beans

Every bean had to have its sides sliced off and discarded to remove the strings. This was not only labour intensive, it required some judgement as to how deeply to cut. Too deeply meant that some of the bean was wasted, but not deeply enough meant that the dreaded string remained. 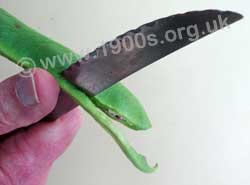 Cutting the sides off a runner bean to remove its strings - but see today's easier way.

I once saw my father stringing the day's runner beans for my mother. He said that in his childhood in the early 1900s it would have been one of the jobs of the older children, which is why he knew how to do it. He stressed 'older' children because they had to be trusted with a knife that was really sharp.

Once the stringing was complete, the beans had to be sliced for cooking. This too had to be done by hand and with a sharp knife. The cuts were always made at an angle crossways so that any remaining string would, at least, be cut into short pieces. 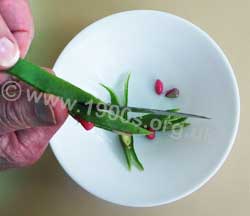 It was considered a skill to slice the beans thinly for the table, although when I tried, in order to take the photos for this page, I found it almost impossible, probably because today's stainless steel knives are not as sharp as the old non-stainless ones which the knife and scissor sharpeners touring the streets used to sharpen regularly. 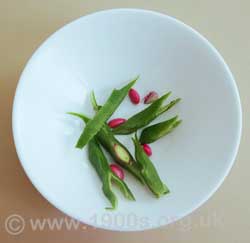 Beans sliced with a knife ready for cooking

The resulting beans look nowhere near as attractive as the sliced beans produced with the modern gadget described on the companion page. Neither, being thicker, would they have been as tender to eat.