Why preserving home-produce was essential in the past

Preserving home-produce was always important in the past for reasons of cost and availability. 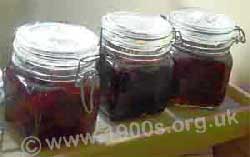 During the Second World War, though, it was essential to let nothing go to waste if the population was to stretch its meagre rations and have little extra treats throughout the year. This was because Hitler tried to starve Britain into submission in the Second World War. So imported food was in short supply because of the risk to merchant seamen of bringing it in from overseas. These seamen risked their lives bringing in what they did, in perpetual fear of being sunk by German submarines. Consequently householders made a point of preserving what food they had.

Remember there were no fridges or freezers in the households of ordinary people until the 1950s and 1960s.

Fruit was preserved by 'bottling'. There was nothing new in this. Spare fruit had always been bottled during the gluts of the fruiting season. What was different in the war was that food was in such short supply that every effort had to be made to use and preserve what came into season. So bottling was on the increase.

Bottling required special glass jars known as Kilner Jars which had tightly fitting spring lids to stop leakage and to keep out air. The seal was made even more secure with special rubber rings. These rings had to be replaced every season, but the jars went on year after year.

To preserve the fruit, it was cooked and while still hot was poured to overflowing into the Kilner jars which had been slowly heated in the oven. Then the jars were sealed, and when cold, washed to removed any overflowing juice.

Bottling worked well, although occasionally some mould did get in to spoil the fruit. This was likely to happen if the fruit was not completely cooked through and if any air was left in the jar before it was closed.

We had a small garden when I was a child, so we didn't have enough fruit to bottle. However I clearly remember trying the results of other people's bottling which I didn't like very much, as it seemed to have too uniform a consistency.

Although my mother never had enough garden fruit to make jam or chutney, it was common among households with larger gardens. I don't remember trying the results in the war, probably because they were not given away freely to anyone outside the family.

However, I have tried both since. The problems with jam-making are how difficult it is without specialist equipment to get a set which is not too solid or too liquid and how easily mould seems to get into the jars. During wartime there was the added problem of sugar being rationed. Women saved their sugar for jam making, but just imagine the disappointment if months of sugar ration was wasted if the jam didn't work properly!

The problem with my chutney making was that the family preferred the bought jars. In the shortages of the war, of course, they would have had to put up with it or go without.

The only fruit we had in any abundance in our small garden were apples, and occasionally tomatoes in a good year.

To keep tomatoes, they had to be stored out of the light and at the right humidity. My mother said that she kept tomatoes, wrapped in brown paper in a drawer until Christmas, but I wasn't fond of them as a child, so can't remember them.

The accepted wisdom seemed to be that apples should be wrapped in special waxed paper, but I don't think that my mother ever did this. Our apples were kept on layers of brown paper on trays or in cardboard boxes. The paper was important to absorb the juices of any apples going bad, and trays were better than boxes because apples beginning to rot could be spotted more easily and removed. One rotting apple always caused those touching it to rot as well. We managed to keep apples until March.