Based on experiences at Copthall County Grammar School in the 1950s. How typical was it?

Sources for this page

Although I joined Copthall Grammar School in 1950, so have no personal experience of it before then, I am delighted to have been contacted by former pupils from those earlier years who have provided their recollections. These have since been augmented from an old book* produced in 1996 by Margaret Thomas, a teacher at the school, to mark its Diamond Jubilee. (Copthall was formally opened in 1936.)

The Grammar School uniform in its early years

I made the point in connection with the school dances that Copthall was aiming to bring its girls up as young ladies, rather as if they had been at a girls' public school. The uniform, described by Dorothy Puham and Renata Darnell bears this out.

My recollection of the panama hat

When I started at Copthall in 1937, shortly after it was built, we the girls were so proud of our uniform!

In winter it was navy in a sort of A-line shape, not old pleated like those at other schools. We wore white blouses and bright emerald green ties and navy blazers. Out of doors we wore navy velour panama hats with the same colour green bands around them.

Different as this uniform was to that when I was at the school - see uniform, 1950s - the basic colours were unchanged: The colour for the tunics, blazers and berets was still navy blue and accessories were still bright emerald green.

It is surprising, though, that the checks gave way to stripes. Perhaps it was something to do with clothes rationing and the availability of certain fabrics in after and World War Two. 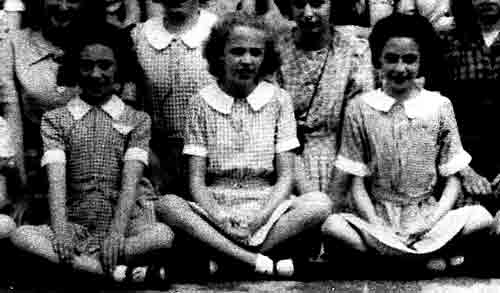 Detail from the 1946 school photo, enhanced to highlight the check summer dresses. Although not a colour photo, the different contrasts on the three dresses substantiates their being in different colours.

Inspection of this photo and the complete one shows that various interpretations of the check dresses were allowed, probably because of. the shortages and austerity following World War Two.

To reinforce the point about being brought up to be young ladies, when I was at Copthall in its early years, the prefects checked that we were sitting upright during school dinners.

Quite a contrast to the prefects checks at school dinners in the rationing and austerity of the 1950s! Then prefects checked that lumps of gristle were swallowed whole rather than wasted.

Teachers and pupils in the school's early years

Although I remember Miss Heys-Jones very well, I only remember one of the other teachers on the 1950s teachers page. She was Miss Headland who taught geography.

I recall a music teacher whose name, I think, was Miss Gabain; I know we nicknamed her 'Gabby'. Miss Smith was our French teacher. There was also a Miss Paulette (although she may not have spelt her name this way) who came just before I finished school and was much more modern than the others.

Teachers in the early 1940s

Miss Blakeley, Miss Headland, Miss Downe and Miss Huntley from the 1950s teachers page, were there at some stage while I was. I arrived in 1941 and left in 1946.

There was a wonderful English teacher called Naomi Lewis, who installed in me a real love for English literature, for which I am grateful to this day.

It is interesting that all but one of the early teachers had left by the 1950s. Of course teachers do move on. However, Copthall was a flagship new school and it is likely that only particularly experienced teachers were employed at its outset.

I came to Copthall in 1941 from Deansbrook junior school, my family having escaped from Nazi Germany at the end of 1938. At Copthall we girls and teachers spent a large part of the war in the air-raid shelters. When it got very noisy outside, we would sing loudly to drown the sound of gunfire.

One shelter experience stands out in my memory. We were doing a French exam, sitting in two long facing rows with knees almost touching and having to describe a farmyard scene .I was considered good in languages so the girls next to me asked me for the French for cow. I produced the word 'Mouchoir' which was passed down the line. It was of course wrong, and must have puzzled the examiners!

According to Margaret Thomas's book*, the school air-raid shelters were on the site of what I knew as the canteen, which was built after the war finished. (Previously lunch had been in the school hall.)

An effect of wartime austerity on pupil behaviour

While I was at Copthall there was a terrible incident, with one of the first or second formers killing herself by jumping from the school tower. Rumours were that she had lost her comb and dared not go home without it. (Remember that this was wartime with serious rationing and shortages.)

Peace after the war

I started at Copthall in 1945, the year that the Second World War ended, and two pupils from each year were picked to go on the first peacetime boat down the Thames and round the docks. I was really pleased to be one of them. Photographers from the evening papers stood at the bow of the boat, taking photos, although I never saw any of them.

School and the 1948 Olympic Games

Copthall was used as accommodation for athletes during the Olympic Games of 1948. That was before I went to the school, but I lived so close that I saw them arriving and departing.

I have no idea what nationality they were but I only saw women. Whenever they went out they wore lovely dove grey suits and little hats. They were so smart. They were transported to the Games by coach.

The most significant event of 1948 for pupils must surely have been that the school finished a week earlier than usual in July. This allowed the school to be turned into a hostel to house over 100 gymnasts from Sweden who were giving two demonstrations at the Olympic Games, held that year in London. ... Workmen [converted] classrooms into dormitories and larger rooms into lounges, dining rooms, offices and recreation rooms. [The gymnasts brought their own chef and food with them.]

from book* by Margaret Thomas

The Olympic games had just been held when I started at Copthall in 1948. Various people connected with the games had stayed at the school and some of the foods that they left behind were laid out at for us girls at lunch time with our school dinners. I particularly remember tinned foods and dry biscuits rather like Ryvita. As the country was still on rations, we all jumped at the chance of this free food.