Miss Heys-Jones was known informally throughout the school as 'Daisy', although I have absolutely no idea why. The nickname was in regular and widespread use before and throughout my time at the school, so she must have known about it, although no-one would ever have dreamt of using it to her face.

She was respected but relatively distant, although I never heard anyone say anything against her. In general our only personal contact with her was when we came back to school after being away ill. We had to queue up with our sick note outside her room and then go inside to see her. She always said that she hoped we were feeling better.

She took her role seriously, and it was because of her summoning my father to meet her at the school that I ended up at university rather than the local secretarial college. For that I can never thank her enough, and I am sure that others of my former schoolmates must have similar stories to tell. I am just ashamed to say how I took it all for granted at the time.

Marjorie Heys-Jones was the first of at least three daughters, born to solicitor father, Ernest Jones, and his wife, a naval officer's daughter. The date was 26th March 1898 and the birth took place at 4 St Leonards Road in leafy Ealing. The family afforded two live-in servants. 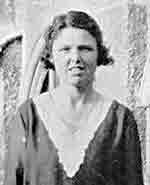 Two undated photos of Miss Heys-Jones, from her time as a teacher at Rodean, courtesy of Paul Beecham

At some stage previously Ernest had decided that he and his family should have a double-barrelled surname. As Heys was his middle given name, the new surname became Heys-Jones.

Marjorie's maternal grandfather was Sir Henry Norbury, eventually Inspector-General, RN, a medical rank. He was later honorary surgeon to Edward VII and George V. He was a veteran of wars in South Africa and wrote a campaign history.

I am particularly interested in Marjorie's life, friendships and associations, and I would be grateful for any help in this connection. I can be contacted via Pat Cryer.

I don't suppose that any pupil ever thought of a head teacher as having a life outside school, but Miss Heys-Jones did have such a life. An obituary published in The Pinnacle shows that she was an accomplished rock climber.

Obituary of Miss M B Heys-Jones. I am grateful to Sally Lawson (formerly Sally Porte) for bringing this to my attention

Tap/click for a larger, legible version

This report also shows that she died in 1989, which is probably right, although the information about her work as a headmistress is inaccurate in its date. She was, in fact, Copthall's headmistress from its inception in 1936. She retired in 1963. See a separate page for later headmistresses.


Extract from book* by Margaret Thomas

[Miss Heys Jones] devoted countless hours of a very busy life to working tirelessly in the interest of individual girls in her care... She took endless trouble entertaining girls and parents, advising on subjects, university and college places and suitable careers, and championed successfully many a girl whom less discerning people might have written off as a failure.

Miss Heys-Jones has become so inseparable in our minds, from Copthall, that when, at a staff meeting, she first made the announcement of her retirement, the news took a long time to sink in. Her energy and enthusiasm for all that concerned the life of the school, that we could not imagine the Copthall without her, or her without Copthall.

From the first day in 1936, when she took over a half-finished building and greeted the First Formers, she identified herself with every aspect of school life. Even when the school has swelled to over six hundred, no activity in which her girls were involved was too humble for her to notice - she attended dramatic performances by unaided First and Second form girls with as much enjoyment and interest as she organized large-scale public occasions in which the whole school was involved. We shall remember for a long time how she used to visit every form room with obvious pleasure on 'S.C.F. [Save the Children Fund] Afternoons' and how until quite recently she took part in staff hockey and tennis matches against the school. Her participation in tennis matches was particularly lighthearted and she infected spectators with her own enjoyment.

The difficult war years, coming so soon after the school was started, called forth her special talent for administration, for life could not be regulated then by cut-and-dried rules, but required a flexible approach. Many early Copthall girls remember her most vividly leading the school to air raid shelters during 'Alerts#. The notice 'Mind Your Heads' which still exists in the dark regions under the stage where few present members of the school have ever penetrated, is an unseen memorial of the days when this rather dismal cavern was the only air raid shelter. Miss Heys-Jones, staff, and girls sat there until the 'All Clear' sounded and life could go back to normal once again.

One of the great interests of her life has always been the Save the Children Fund, which she built up at Copthall into a great social service. She inspired generation after generation of girls with her enthusiasm. It is a great tribute to her influence that the school has never lacked individuals and groups who have arisen, apparently quite spontaneously, to give time, energy and money in the cause of S.C.F. The most diverse activities - form magazines, jumble sales, shoe-cleaning, car-washing, competitions, carol singing, special collections - may have been organized by the girls themselves without any direct suggestion from her, but the desire to serve S.C.F. had been fostered in them by her example.

Many of us have our own individual reasons for appreciating Miss Heys-Jones' personal qualities - her dry humour that enlivened staff meetings, her directness and honesty, her unfailing kindness in case of illness or private distress, but her most outstanding characteristic, which touched the lives of all of us at Copthall has been her interest and respect for the individual. She has always believed, with complete consistency, that each individual is valuable for herself alone. She devoted countless hours of a very busy life to work tirelessly in the interest of the individual girls in her care. Through her efforts, many a quiet girl found confidence in her own ability, and many a 'difficult' girl grew to find school life acceptable. She took endless trouble in entertaining girls and parents, advising on subjects, university and college places, and suitable careers, and championed successfully many a girl whom less discerning people might have written off as a failure.

Much of this work was unknown beyond the individual it concerned, but those of us who have been sixth form mistresses, particularly know how much time and care she spent in ensuring that each girl should find her appropriate niche in the world. She was always kind and thoughtful in cases of personal worry, and many girls with family troubles have had their life at school made easier by her unobtrusive care.

It is with her line of interest in the individual that she should have been such a keen supporter of the Old Girls Association; indeed there have been times when it depended on her for its existence. She has always attended its meetings and dramatic performances, was always present at the Annual Dinner, and has prodigious memory for old girls, and for details of their careers and families. Many old girls all over the world still write to her regularly, and this magazine's 'News of Old Girls' leans heavily on her unique knowledge.

Her care for the individual has never narrowed her interests. Outside school, she has given years of valuable service on committees, particularly those concerned with education. Some years ago she became known for her 'advanced ideas' on school uniforms, but with characteristic modesty, she did not reveal that she had been asked to speak about school uniforms on T.V. until the programme was over, to the great disappointment of those who did not have their sets tuned to B.B.C. on a particular evening in 1957.

Finally, Miss Heys-Jones has always been unostentatiously, but sincerely, a deeply religious woman. She thought of school prayers as an integral part of the day. However busy she was, she never missed taking the school party to the School Leavers Service at St. Paul's Cathedral in the summer term. The Harvest Festival Service, with its practical aftermath in the distributing of produce and flowers at the Linen Drapers' Home; and the School Carol Service were among the most important events in every school year.

It was not surprising to those who knew her that she lived for many years in Page Street, almost at the school's doorstep, so deeply were her life and interests bound up in the school, but since she has moved to her house in Elstree, her garden has become a great pleasure to her. While still at Copthall she could often be heard in earnest consultation with members of the staff with similar interests about plants and shrubs for her garden, and it must give her even greater pleasure now she has more time to spend in it.

Much of this appreciation has had, perforce to be written in the past tense, since it is already two terms since Miss Heys-Jones left Copthall; but it does really seem absurd even to think of the past tense in relation to her. It is quite typical that on her retirement, instead of sinking into what might be considered a well-deserved rest, she immediately took up again a long-standing interest in the wilder places of the earth's surface and departed to the remotest region of Turkey, where, as a member of an archaeological expedition, she travelled over unmapped tracks through wild mountain country. We can imagine her doing it with the same efficiency and genuine enjoyment that she brought to school life, and hope to hear of her participating in similar adventures for many years to come.