Social norms and values 1930s: insights from an insurance policy

The 1938 'Hearth and Home' house insurance policy gives significant insights into the norms, values and expectations of ordinary people at the time. First though, a little about the policy and how it came into my possession.

In July 1938 my parents married and set up home at 9 Brook Avenue, Edgware on the northern edge of Greater London. The house was quite an ordinary semi-detached, typical of the pre-WW2 houses of London's suburbia. My father insured its contents from July 5th 1938 in what was called a 'Hearth and Home' policy from the Prudential Assurance Company. Both it and its subsequent endorsements have survived.

The physical size and paper quality of the insurance policy

What is immediately striking about the policy document is that it is on a single very large and heavy sheet of paper. 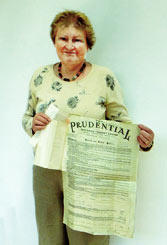 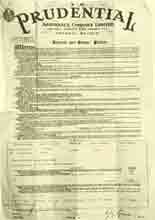 Tap/click the thumbnail for a larger, legible version. This is a very large document with small print. So you would be best to view it on a full-size screen.

The photos give an indication of the size of the policy size, but do not convey the parchment-like feel of the paper which is quite thick. As World War Two with its ensuing shortages was still more than a year away, the size and quality of the paper is an allusion to earlier times when official documents were written on parchments. These were often of odd sizes and generally larger than the paper size used to today. So I suspect that the Prudential Assurance Company was aiming to impress with tradition and reliability.

Subsequent endorsements, stuck onto the policy in later years are much smaller in size and on thinner paper, as was my father's only surviving house buildings insurance policy of a decade later.

Insights from the insurance policy into social norms of the time

You can read the full policy from an enlarged image by tap/clicking the thumbnail, but here are some of the particularly anomalous features. Most of them imply a reasonably well-off clientele - not that that applied to my father. Less well-off families would probably have lived in rented accommodation.

Loss or damage cause by:

This inclusion highlights the fact that the aircraft of the 1930s were open to the air, such that the pilot could, if he so wished, drop things overboard.

Impact with horses or cattle

Horse drawn vehicles were still in widespread use.

Apparently the Insurance Company regarded it as was quite normal for anyone insuring the contents of their house to have servants. My research suggests that this was probably the case before World War Two. Those who were servants or of the servant classes probably didn't own enough for the possibility of household insurance to enter their heads. (This was in contrast to insuring for funeral expenses, which was the norm for everyone except the very poor.)

Damage to mirrors except hand mirrors

This clearly applied to wall mirrors, possibly of the type that hang in stately homes and which must have been relatively expensive.

Many of the people owning property might well be renting it out.

See above on servants.

Gold and silver articles, jewellery and furs were specifically excluded from my father's policy, although they could have been included for an additional premium. Not that my parents would have had any such things apart from my mother's engagement and wedding rings.

Note the specific mention of furs. These were status symbols when I was growing up, and they were from animals, as there were no man-made imitations. At social gatherings like weddings, women would bring out their furs. The better-off would have fur coats, and the less-well off would sport a length of fur round their collars, often with the head of the unfortunate animal still in position - with glass eyes. To add to the quality of the status symbol, the type of animal was important. One of the most demeaning things to be said about a woman was that she was sporting 'a bit of rabbit'.

Nowhere in the policy is insurance of the house itself mentioned. Perhaps my father thought that this was unnecessary, or perhaps he did insure the house but the documents haven't survived, or perhaps war had broken out by the time he thought about it, or perhapa he was just used to rented accommodation which was insured by the landlord. I don't know whether insurance companies insured buildings in World War Two when they might very probably be razed to the ground in the German blitz. When my grandparents' house was bombed out of existence, the Government paid some compensation after the end of the war, but my grandparents still lost out significantly. (A policy of my father's for house insurance does exist but it dates from 1948.)

Costs of the contents insurance

Surviving documents show that the house contents were insured for £200 in July 1938 at an annual premium of 10 shillings.

Elsewhere on this site is a page on life insurance and house contents insurance earlier in the century.