A guest contribution by Bob Howard

In 1960 I became a National Service conscript in the army in the Royal Army Medical Corps (RAMC). Not that this was my choice. National Service was finishing at the time, and it was probably touch and go whether I got called up at all. I was 20 years and 8 months old.

I was sent to the army's training centre at Crookham in Hampshire, which is now, so I understand, a women's prison. I arrived on a Thursday. Yet by Sunday I was home again. You see, there was nothing to do. I walked out of the camp in full uniform and no-one stopped me. I got a bus; then a train to Waterloo mainline station; then across London to Liverpool Street; then another train to my home town, followed by another bus and a walk of two miles. After that, there wasn't time to stay long at home, but I had dinner (lunch), and then set off to get back before nightfall. Needless to say, my parents were surprised to see me but not at all worried that I had gone AWOL (absent without leave).

Back at camp, no one had missed me - and after that I discovered that by dropping a certain corporal half a crown, he would mark me in on a Saturday night. I could then get away on a Saturday at noon. It was understood, though, that if I got caught he would 'know nothing about it' and that the blame would be entirely mine.

The AWOL went on for several weekends until the corporal, himself, was found out. It only meant that I missed one weekend, though, because after that it was decided by the Top Brass that we could have a 36-hour pass every weekend as long as it was within a 30 mile radius of camp. My home, however, was outside this radius, but I still went home, and no-one ever found out.

Our uniform colour was the same as other regiments but with a blue beret showing the RAMC badge. Also, on the right shoulder, there was a white piece of rope about half an inch in diameter with a red stripe running through it. This ran under the arm and through the buttoned-down top flap (to which officer's pin their stars). 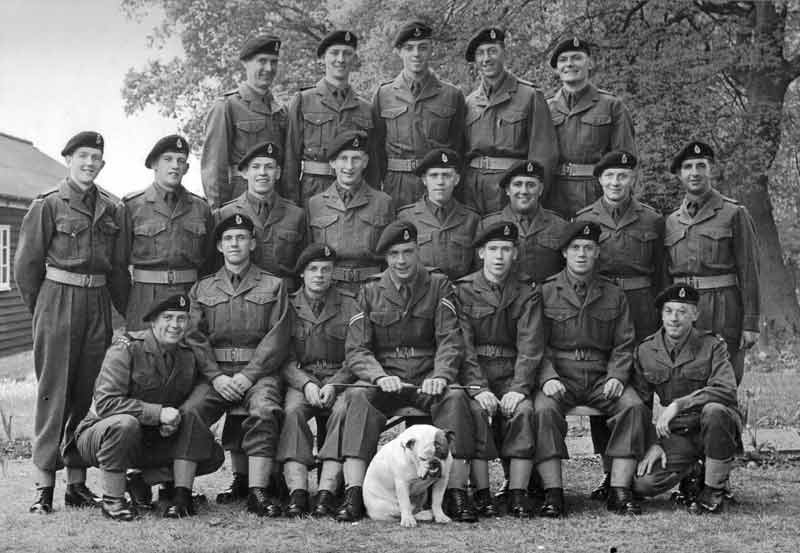 The end of training at Crookham, showing the uniform. Photo courtesy of Bob Howard who is fourth from the left in the back row. He would be pleased to renew contact with anyone in the photo and can be contacted via the webmaster.

John Lloyd has been in contact to say that he is standing on the far left of the middle row.

The training at Crookham started with eight weeks of military 'square bashing', i.e. learning to march, as required by the army. One day stands out in my memory. We had to learn to march in a squad and turn at the command to the right, etc., which we did. However in the middle of the squad was a short chap from Somerset who slipped over. Of course we had to carry on marching, stepping over him as necessary, and he got shouted at by the corporal in charge.

We learned to obey the word of a command immediately and unquestioningly, so that it was carried out without having to think. One such time also stands out in my memory. The weather had started to get rather warm, and I had let my mind wander. Then I registered the corporal saying the single word, 'Attention, which normally meant straighten up, stomach in, chest out and arms rigid at one's side, fingers closed onto palms with thumbs at the front. So this is what I did. Then I felt a right idiot because it turned out that he had actually only been using the word to explain the next drill. Consequently no-one else had moved. Seeing me at attention, he asked me what I wanted - which was of course nothing.

Another time I was put in charge of the squad and told to march them to the cookhouse for duties. Only about half of them got there. Although I knew that blokes were dropping out, I couldn't do much about it because I was only a private.

One of my cookhouse duties was to help with the mixing of sausage meat in what looked to me like a sink. When I finished, I had clean nails, so I told everyone not to eat the sausages that day.

Then followed eight weeks of medical training to St John's standard. I still have my certificate.

I was sent to the British Military Hospital (BMH) in Iserlohn in northern Germany. There I worked a lot on the wards with patients suffering from broken bones, head injuries, ulcers and such like. My duties were the same as a nurse, e.g. doing injections, filling in blood pressure and temperature charts and taking out stitches.

We took it in turns to do night duties, which I only did three or four times a year, a week at a time with upwards of about 11 patients, all male, (Women had separate wards.) I was alone on the major ward for a lot of the time, although I could, if necessary, call on a corporal or sergeant from the next ward which was a Canadian one. After a week's night duty we had about ten days off. It was like a holiday, and we could more or less do what we wanted before returning to normal day duties.

The uniform while on duty in the hospital was much the same as in training except that we wore a white apron similar to old shopkeepers' ones and no blouses (jackets).

Then I had a stint in the clothing store; followed by ration delivery which involved, among other things, delivering milk in the mornings to the wards.

For the last three months or so, I washed up in the officers' mess.

National Service completed - or was it?

By this time I was due for release from the army and to return home - but in 1962 a scare went round because the Russians started to build the Berlin wall. So we conscripts were lined up and told that we all had to serve another six months.

A big moan went through the ranks, and several of us uttered, "I am not doing it!". The sergeant was ready, though. He announced in a loud voice, "Anyone refusing to sign the paperwork will still do the extra six months because the officer will sign for you". So that was that.

Actually I was rather pleased at the delay because I had just started going out with a German girl. Not that it really made any difference as I never married her.

I am glad that I did National Service. It was the first time that I had been away from home (apart from a short time in hospital at the age of seven with a broken arm), and I was pretty naive about life. The army soon put that right. So I consider myself lucky.