Conscription to the Royal Navy in post-war national service 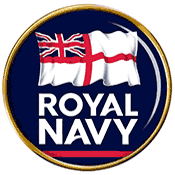 Registration at the labour exchange

There were posters on most railway stations stating that all male personnel born between certain dates were required to register at their local labour exchange for National Service. This I duly did. At the time, I was a Junior Clerk at Houlder Brothers, an insurance company in Leaden­hall Street, London.

The next step was the arrival of a small brown envelope requiring me to attend at Romford Recruiting Centre.

The introductory talk at the recruitment centre

At the recruitment centre in Romford a collection of some twenty to thirty young men gathered and were told to be seated in a large room. An army sergeant then appeared and told us what the procedure would be. First we would be 'documented' and all personal details would be recorded. Next we would be given a thorough medical examination. After this we would sit a written test to assess our suitability for one or other of the services and possibly - at this early stage - for an idea of what we might be doing in the service to which we were allocated. The final stage would be an interview with a group of three officers representing the three services to tell us which part of the armed forces we could expect to join and, possibly, the trade we would be required to follow.

"Got that?" from the sergeant produced not one syllable from the rather timid group of young men except one who ventured to ask what the chances were of getting into each service. The answer was quite definite. Our chances of getting into the Royal Navy were practically nil, the vast majority would be joining the army but the brighter young men might hope to get into the RAF. He saw little chance of any option in reality and said that we might as well resign ourselves to being in the army fairly soon. There being no more questions he read out a list of names to which we each answered and we waited for the procedure to start.

Surprisingly, at this stage I was asked if I had any preference for a particular part of the armed forces. I really hadn't. I had a completely open mind and was rather excited by the whole idea of being called up. I saw myself as a guardsman I suppose - being on the tall side - but I really did not care whether it was the army, navy or the air force. I suppose the least attractive to me was the air force as I knew I would end up as a clerk, and that I was determined to avoid.

I happened to mentioned that I had spent some time with the Sea Cadets and attained the rank of Cadet Petty Officer. I had joined the Sea Cadets simply to have somewhere to go during the week with other boys of my age so that we could 'play sailors' and generally enjoy each other's company. In reality I would probably have rather joined the Air Training Corps but it didn't matter all that much, so I stayed in the Sea Cadets. I was therefore not particularly enthusiastic about joining the Royal Navy.

Fully 'documented', I was given a blank form and passed into a large room divided into cubicles by hanging sheets. Each cubicle was for a special purpose and the first was obvious when I was required to present the army medical person with a urine sample.

As I passed from cubicle to cubicle I was prodded, poked, asked questions ... . I bent down, stood up, got up and off a chair six times, etc., until I came to the ear section. The rather large doctor in charge looked in my ears and said something like "Hm! Can't see a bloody thing in there, too much muck and wax". Whereupon he seized a large syringe and nearly projected me across the room with a fierce pumping action on the syringe to clear the offending debris. Seemingly satisfied he put his initials on the form.

I finished up sitting at a table where my form was perused by another doctor who tapped his pencil as he read it. Having read it in something like five seconds he reached for a rubber stamp and brought it down with force on an inkpad, then with equal force on the bottom of the form. The stamp read, "A1 - Fit for service". He then brought the rubber stamp down with equal force on a small brown card measuring about four inches by three inches which he handed to me. Proof, no doubt, that I was, in the opinion of the British Government, fit to be killed on its behalf for any reason of which it could think.

With about a dozen others I sat at a trestle table far enough from my neighbours to prevent any cribbing, and a Royal Navy Chief Petty Officer (CPO) stood in front of us with a handful of documents in his hand. He told us that this was a test to see if we had any brains, and the procedure was that he would hand out the papers to each of us, tell us when to turn over the paper and proceed, then halfway through the allotted time say "Half Way" so that we had an idea of how much time we had to complete the test.

"Turn your papers over and start," said the CPO and this we did. The test was a series of questions that had multiple choice answers for about half of the questions and a straightforward response requirement for the remainder.

The first question showed a small picture of three objects - a hammer, a screwdriver and a nail. The question was "Which two objects do you see as having related uses?" Feeling this was a doddle I ticked the hammer and the nail. So far, so good. This type of question went on for about another ten examples before the other type appeared.

These latter questions were quite different. "What is the difference between a verb and an adverb?", "If a bath fills from a tap in thirty minutes and drains from a plug in fifteen minutes how long will it be before the bath is half full?". Questions continued in this style with the last question being a quadratic equation, the like of which I had not seen since the Fourth Form at the William Morris School when I was fifteen.

"Time!" announced the CPO, suddenly. A dozen or so surprised faces looked up. The expression on each of them was "What about your telling us when we were half-way through?". But nobody said a word. The CPO had obviously forgotten, which may have wrecked the hopes and aspirations of many of the candidates, but none of us felt adventurous enough to point this out. I had managed to reach the end anyway, so felt that I could afford to let this slight mishap go. The papers were duly collected.

One by one a person was called into the inner sanctum and the door closed behind him. As each came out the one word or phrase told us his news ... "Army - Infantry" ... or ... "RAF - Clerk". The ratio of "Army" to "RAF" was about ten to one.

My turn came. "Sit!". I sat. "Now then, we see you want to join the Royal Navy." Before I could venture a reply he went on. "You know that less than one in five hundred National Servicemen is given the opportunity to serve in the Royal Navy do you?". I took this to be a rhetorical question, so just sat there on the edge of the chair. "However, you did well in the intelligence test and we are going to recommend you for the Royal Navy Communications Branch - Signalman or Telegraphist. That suit you, eh?" "Yes, sir" I ventured. "Well then, 'orf' you go and good luck to you ... . NEXT!".

I returned home and went back to work the next day as usual.

Page contributed by Fred Peach who may be contacted at the following email address. Please retype it because there is no electronic link. This is to prevent spam abuse.