A guest contribution by Fred Peach

Day 2 in the Royal Navy

All the pages by Fred Peach on his National Service in the Navy:

Stages in the experience:

Day Two saw all of us raw recruits gathered together for a talk by an officer who reminded us why we were there and what we were going to be doing in the next eighteen months.

Most national servicemen were in for 2 years. This apparently short time was due to Fred Peach and me being one of the first conscripts. (I was a navy storekeeper during the same dates.) At the start of post-war National Service it was to last for just one year, but before it had even got off the ground it was changed to 18 months. Only a month after I had been demobbed it was put up to two years because of international tensions in the middle and far east and the cold war.

We were told our duties and respons­ibilities and given a short history of the camp and the Royal Navy. Longer lectures on Naval History and the like were to follow over the next four weeks. The essence of these are on later pages.

Then on to administrative matters. We received our official naval numbers, identity card and ships card, and each of us was assigned to a base.

Allocation of naval base

The Navy's custom was to allocate a sailor's 'base' closest to his home town. Thus most of the Chatham ratings* came from London and most of the Devonport ratings came from the west country. The northerners had to put up with what they got.

* A naval rating is an enlisted member of a country's navy

The first letter of our number indicated our base. As national servicemen, our base could be either Chatham, Portsmouth or Devonport. There were other bases but only for specialist people such as members of the Fleet Air Arm and the like. So our numbers started with either C, P or D.

Following this came a code indicating what type of service time we had contracted to follow. This was fairly easy for the regular personnel - either SX (Short Service, i.e., seven years full-time service and five on the reserve) or JX (Long Service, i.e. twelve years and seven years on the reserve). In the case of national servicemen the Navy had not thought of a suitable variation so we were given Long Service codes, JX.

Finally came the a six-digit number which was simply the next available number from a list.

My number was C/JX 872268 which meant that I was a Chatham Rating, on Long Service (because the Navy hadn't got a code for national servicemen) and that I was 872268 on a list.

The 'Ships Card' was a small card in booklet form (approximately three inches by two) that gave name, rank and ships number. This was our identification within the four walls (or the hull) of the ship we were currently on.

Being 'kitted out' meant being given a full uniform and all the accessories that came with it. 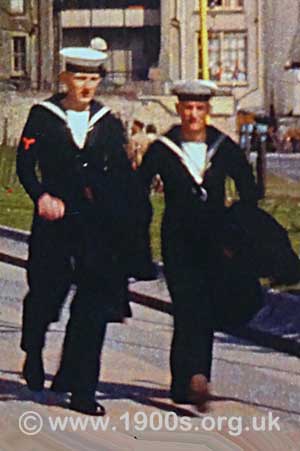 Naval uniform as seen on the streets. Detail from an old photo.

There were two sets of a full suit of jumper and trousers according to our 'trade'. (Men dressed as seamen had the usual sailors dress but stores assistants, writers and the like had a blue jacket and regular trousers.)

As an Ordinary Signalmen I was also issued with:

Two blue collars, a lanyard and a 'silk'. The latter was worn around the neck and tied at mid-chest, as was the lanyard but mainly only when ashore.

A wide blue belt with a pocket in it.

One pair of black boots.

One pair of black shoes.

Two pairs of 'drawers' - underclothing pants in other words.

One pair of woollen gloves.

Two badges denoting 'trade - in my case the crossed flags of a signalman, the recruitment board's recommendation for my trade having been accepted.

One hatband with the name of HMS Royal Arthur on it and another with simply HMS on it. One heavy greatcoat.

One full set of hammock 'ratlines'.

One pillow and two pillow covers.

One 'Name' stamp for stamping our name on everything we owned.

Two handkerchiefs. (Most of us had half a dozen hankies with us already as part of the essentials we brought with us.)

One what was called a 'Housewife' containing needles, cotton and buttons.

For more or less standard sizes there was no problem of as 'fitting'. Jokes about there being two sizes - too big and too small - abounded but in the main we had a fairly well fitting set of uniforms. Those who were definitely not within the range of fittings were issued with tailor-made uniforms, but they suffered from having to wait a long time for these to be made. They did jobs like sweeping up and collecting rubbish until their tailor-made uniforms arrived.

You will notice that we were not issued with items which the RAF and the Army took for granted. For example we were not issued with pyjamas, bed-sheets or vests as underclothes. The origin of the lack of pyjamas was always said to be that at sea we were expected to sleep in our underclothes so that we could slip from our hammocks into our outer uniform (always action/working dress) in the least possible time.

Some other items were not issued to us personally, but were on loan from the ship or establishment that we happened to be in, as considered necessary. They had to be returning on leaving, and included a steel helmet (tin hat) and an extra blanket.

The remainder of the four weeks

From the next day onwards for the next four weeks things went at a great pace, and I began to enjoy myself thoroughly.

We learned how to deal with someone attacking us with a broken bottle, although we were not quite sure how these antagonists were to come at us across the top of the waves.

We also learned how to wash and mend our clothes and keep ourselves neat and tidy.

How we washed our clothes

We washed our own clothes using a bucket of hot water and some cheap rough soap issued once a month.

At any time when a crew member was off duty one of his pastimes would be to obtain a bucket and sit rubbing away at his collars, underclothes, handkerchiefs and socks - always rubbing, the rule being you scrub dirt in and rub dirt out. Once all his clothes had been rubbed and squeezed clean, the bucket was refilled with cold water, the clothes rinsed then hung up in the mess to dry. If you could get away with it you could leave your washing to dry near the engine room where the air was always humid or very warm - providing you were reasonably sure than when you returned to collect your dried clothes they were still there.

We were lectured on all manner of topics.

After the four weeks, we were ready to go to the in-depth part of our training which would prepare us for the work that we would be doing in-service.

Page contributed by Fred Peach who may be contacted at the following email address.

Please retype it because there is no electronic link. This is to prevent spam abuse.