A guest contribution by Fred Peach

All the pages by Fred Peach on his National Service in the Navy:

Stages in the experience:

After our basic training, the next posting for us national service­men was to undergo the in-depth training for the work that we would be doing for the remain­der of our service. In my case, this training was to be the Royal Naval School of Signals at Cookham Camp, near Rochester in Kent.

Here I and approximately twenty or so others arrived and were told that we would be embarking on a six-months course at the camp under the instruction of a Petty Officer, plus a selection of specialist instructors. We were assigned to Hut E11 (known as Easy Eleven) where we selected a bunk and a locker and unpacked our gear. Then we awaited events.

Our weekday programme was set in stone:

We were called at 0600 and after washing or showering in the Bath-Hut and getting into the Dress of the Day had a hearty breakfast every day.

The 'forenoon' period was from 0830 to 1200 We 'Fell in' on the Parade Ground and then marched off to our designated Nissen Hut which acted as our classroom. There we had lectures on all manner of signals and procedures.

The mid-day meal was just as nourishing as the breakfast.

Then we repaired to hut Easy Eleven where we took off the gaiters we had been required to wear and prepared for what was left of the day.

There was always some studying to do and many of us merely took time to relax, write letters home, do our personal washing or whatever caught our fancy.

We rarely went out of the camp during the week mainly due to lack of financial resources. So we relied upon the NAAFI for a cup of tea and a bun, or the camp cinema. Some of us played games such as football or took to running. The recreational facilities were good.

We also had to keep the hut clean and tidy.

At 2100 there was 'Rounds' when the huts were inspected. This involved a small contingent of one Officer of the Day, a Chief Petty Officer, a Petty Officer or going, in line, from hut to hut.

"Stand by for Rounds!" was the order barked by one of the Petty Officers before the four or five of them trooped in to inspect the premises. The occupants were required to stand to attention wherever they were in the hut and answer any questions asked by the officer. Sometimes a comment about a sock lying on someone's bed was made but usually the hut was in shipshape condition, neat and tidy and after a two-minute inspection the contingent trooped out. The last Petty Officer to disappear turned at the door and said "Carry On" and that was that. The shoe polishing, card games and letter-writing resumed.

At 2230 "Lights Out!" was proclaimed over the tannoy system, and we were required to douse the one central light bulb and turn in to our bunks for what was always a deep and refreshing sleep. Anyone who had 'Gone Ashore' had to return by this time.

We were required to follow a pattern of weekend leaves and duties. This was a full Duty Weekend followed by a Long Weekend, followed by two Short Weekends. Then pattern was repeated.

The Duty Weekend was one where no leave of any kind was granted over the entire Friday night from 1630 to Monday at 0830. During that time we were all given particular duties within the camp. These included Guard Duty at the Main Gate, duty in the kitchens, cleaning the bath-huts, sweeping the many pathways and roadways in the camp, general cleaning up and by and large anything that had to be done to keep the camp in a clean and efficient condition. The work was not hard and had its benefits inasmuch as those assigned to the kitchens took the opportunity to steal loaves of bread and large quantities of butter. This meant that during the evening we could make toast on the hut fire or using the hut smoothing iron and smear each slice very liberally with the butter. If we were doubly devious we might also steal a small quantity of jam too. It was conventional for those assigned to the kitchen and who had been given the job of dishing out the food to make sure that their own hut-members got an extra egg, slice of bacon, sausage or whatever while the Chief Chef's back was turned.

Rationing while on leave

Weekend leaves were without any form of ration book.

On Long Leaves we were issued with Ration Slips which provided adequate portions of rationed goods while we were away from the gentle care of the RN Cooks.

When arriving home on Long Leave it was the practice on the first day home to accompany one's mother to the shops where she presented one's  Ration Slip. Wearing ones uniform was mandatory for this. The trick was to pick a Shop Assistant either of the male variety or one who looked liked the sort of woman who might have or have had a son in the services. This ensured that the small amount of rationed goods entitlement was usually greatly enhanced to something like three or four times the proper amount. So this was worth doing, even if the poor lad had to endure endless tales of the past from the male who might be ex-army, ex-RAF but hopefully EX-RN.

Once back home from the shops the uniform was thrown in the corner of the bedroom where it remained for the remainder of the leave period.

The Long Weekend was the opportunity to 'go ashore' as leaving the camp was called. It lasted from 1700 on a Friday until 0830 on the following Monday. Only those who lived in London or near it were usually able to avail themselves of this leave period, the cost of travelling to Liverpool, Birmingham or whatever being prohibitive. So the Northerners stayed put and contented themselves with a quiet weekend spent mostly in camp except for the Friday and Saturday evenings when they went off to the NAAFI Club in Gillingham for the dancing. The Londoners took themselves off to Rochester and Strood Hill where they hitched a lift on any lorry-driver or car-driver who took pity on them and gave them a lift into the city. Nonetheless, the return journey had to be by public transport so if we did not have the necessary cash for this then even for the Londoner it was a weekend in camp.

The Short Weekend was largely the same as a Long Weekend except that leave started from noon on the Saturday.

Long Leave was a period of ten days consecutive leave of absence twice a year.

The course of instruction

The Signals Course was interesting and we enjoyed ourselves, particularly as the weather was warm, it being early April to late September 1949.

The instruction mainly consisted of being taught to send and receive messages in Morse code using a small then a medium sized lamp. Added to this we were required to send and receive similar message by semaphore using our personally issued pair of hand flags. 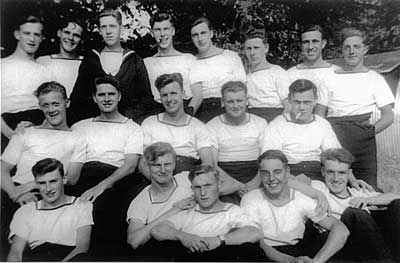 Course 602 at the Royal Navy School of Signals, Cookham, courtesy of Fred Peach. He is the one the one wearing the blue uniform, because he was on Main Gate Guard Duty at the time. The rest are wearing action/working dress.

The 'Biffer' was the daily session of reading a long set of messages via Morse lamp and semaphore consisting of plain language and 'Five letter set code'. The Yeoman Instructor (a Petty Officer) would stand on a high point and we would be scattered over a large football sized field in pairs; one reading the message being sent and the other writing it down in the prescribed manner on a signal pad. After the first session the roles were reversed and the reader became the writer. The same thing happened with the semaphore messages and with the two combined this put paid to about two hours every day. We were required to become highly skilled in sending and receiving via these two means in as short a time as possible. Fortunately, we all managed this without problems.

Other sessions were Fleet Exercises, which meant we sat in a classroom with a transmission key at each desk and a large board at the head of the classroom. Each transmission key was connected to a particular 'ship' on the large board and we would spend the complete session reading and sending messages via the Instructor. To miss a signal meant for your 'ship' meant a pair of signal flags being clapped down on your shoulders accompanied by a meaningful "Wake Up!" from the Yeoman. Other subjects were cryptography in depth, studies of the Fleet Signal Book, sending and receiving messages by wireless and many more too numerous to recall.

Days were full, and we really felt we were being crammed, but time moved swiftly and we were soon at the end of the period of instruction.

Examinations were held periodically to assess our progress and there was always the threat that we would be 'Back-Classed'. This meant being required to leave the present class and join a newly joined class to start the course from the beginning. Fortunately, none of us were.

The last day at Cookham

The end of my time at Cookham had arrived. I was told to report to the Guard House where I was told, in turn, to report to the Drafting Office in the Main Barracks in Chatham. This I did where the Chief Petty Officer in charge, sitting at a high desk resembling something like a presiding magistrate, looked me up and down and handing me a sheaf of papers said "You are drafted to HMS Loch Arkaig which is an anti-submarine frigate currently at Londonderry" What he actually said was "Arkaigderrybagnammicktermorrer0800sharp'ere" but by this time I had managed to understand NavySpeak and got the message.

The collection of papers he handed me contained my Drafting Order (in case I was challenged by naval or military police en route at some railway station or other), a Travel Warrant entitling me to a third class railway ticket from Chatham Railway Station to Londonderry, a number of meal vouchers for use en route and one or two other sundry items.

I left without a word but outside the office I encountered an older rating who looked as if he was experienced in these things. So I asked, "Where's Derry?" I had a feeling it was somewhere in South Africa. He looked at me as if I had joined that morning and said "Derry? Londonderry. Northern Ireland. Why?" I told him and his only comment before going on his way was "Gawd 'elp yer! - B---- of a place - rains all the B------ time!".

I was a trained Ordinary Signalman and about to embark on the next exciting episode in my naval career - goodbye Cookham, hello Londonderry, Northern Ireland.

Page contributed by Fred Peach who may be contacted at the following email address.

Please retype it because there is no electronic link. This is to prevent spam abuse.