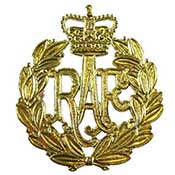 When I turned 18, my call up papers for National Service arrived through the post. On the 29th July 1952 I duly went to Southend-on-Sea for a medical and was signed up with the RAF for three years. I could have signed up for two years, but I hoped that the extra year would give me extra money - which it did - and a chance of a better posting - which it also did, very much to my advantage. My number was 4114681. The 4 in front of a number showed that the person concerned had signed up for more than two years.

My basic training was at West Kirby. Having been at a boarding school followed by two years at a timber company, I could cope with what we were exposed to, but this was not the case for many of the other recruits. Life must have been hell for them. During the eight weeks of basic training my soul and body were not my own, and I never questioned any of the instructions given me. Let me hasten to add, though, that on the passing out parade, I felt it had been well worth it! 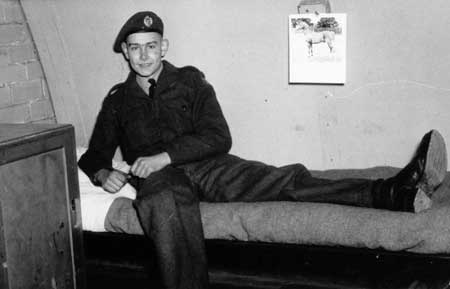 Then after Christmas, I started what was called my 'trade training' for the medical branch of the RAF. This was at Lytham St Annes. It covered all aspects from basic first aid to hospital work and national emergencies.

The range of postings

My first posting was in April 1953 to RAF Andover in Hampshire, I was involved with doing medicals for service and civilian pilots and for providing extra cover for the ambulance service in the Andover area. In July 1953, I was promoted to corporal.

In October I was advised of my posting to Hong Kong, but was allowed an embarkation leave first. In December 1953, at Liverpool Docks, I joined HT Lancaster, a hired transport ship leased from the Bibby line to transport personnel throughout the world. Then in February 1954, I travelled through the Mediterranean to Port Said, through the Suez canal, into the Red Sea, then Aden and Arabian Sea, on to Ceylon (now Sri-Lanka) before the Indian Ocean and finally Singapore. I say 'finally' because during the voyage my posting was changed from Hong Kong to Singapore. Fortunately the four week voyage on the ship must have hardened me to the tropical heat and humidity which was not really a problem for me.

At Singapore I worked in the surgical ward in RAF Hospital Changi. My work was primarily involved with personnel who had been wounded in the conflict in Malaya with the Communist.

In August 1954 I had a new posting: to the Indian island of Car Nicobar, an island I knew nothing about. After training in jungle survival, run by the Malay army and instruction on sole running of a base station sick quarters, I was on my way out in an RAF Valetta plane to the island. First sight of the island was amazing - a small dot in the middle of the Indian Ocean. As we got nearer and lower I saw the dark green foliage of the island, glimpses of lovely crescent bays of golden sands and villages with beehive houses - dwellings were about 20 feet in diameter up to 30 feet in height, raised on stilts with a hole in the raised floor for entry. Then the small air strip appeared. It had been built by the Japanese during the Second World War. There were a collection of buildings - the camp, which was to be my home for the next year.

Once I arrived I was taken off with the person I was replacing. He told me what I was responsible for and then caught the same plane back to Singapore.

It was my responsibility to run the station sick quarters and keep it clean and fully stocked, and to maintain and the health and hygiene of the camp. Essentially this included, first aid, spraying DDT for mosquitoes prevention, control of vermin, maintaining and driving the ambulance and giving inoculations for typhoid, tetanus, cholera, smallpox and yellow fever, many of which had to boosted every year. During my stay I was referred to as 'Doc' or 'Doc Austin'.

As most of the planes came and departed during the morning (unless there was an emergency) most people were able to stand-down for the remainder of the day, to do their main duties. Because it was such a small camp, while aircraft were about, we all helped to turn the them around. The main aircraft we had landing were Hastings, Valettas, Avros, Bristols and Mosquitos. The Vickers 'Valetta'. the last of piston planes was the work horse of the area and was fondly known as the 'Pig'.

The camp had about 20 to 25 staff. For four to five days of the week we had at least one aircraft that would use us as a staging post, occasionally we had two. The aircraft would either bring staff and provisions for the camp, top up with fuel for an onward journey or sometimes make emergency landings.

Any in-coming flights from Singapore would bring in mail, staff, supplies and provisions for the kitchen and shop, plus any other items needed for the camp.

Fuel for aircraft and the power generating plant for the camp was shipped in by sea in drums. They rafted or floated ashore. From there they were taken to the fuel dumps, well away from the camp. When the fuel bowser needed filling, it had to be pumped from the 44 gallon drums. Any new trucks for the camp also came by ship and were rafted ashore.

The N.C.Os on the camp took it in turns to run the shop, and were responsible for re-ordering stock and balancing the books. We sold Tiger bottled beer, soft drinks, sweets, cigarettes in tins of 50, stationery, soap and tooth paste etc.

Once the camp had stood down, and the staff had completed their duties, they were free to do what they wanted. We could use of the Bedford van, Ambulance or Land Rover, to go off to any of the numerous sandy beaches for swimming, photography and fishing.

Football and cricket were played with the local Nicobarese and Indians, and we were invited to watch their wrestling matches, canoe racing and pig fights. At Christmas 1954 we attended their carol service, after which we were given presents by the villagers.

On several occasions I was invited out for meals with the Indian doctor and the resident Indian engineer.

After a time, we built our own darkroom so we could develop and print our own films. Colour film had to be sent to Kodak.

Some evenings we ran Tombola or showed films flown in from Changi.

February 1955 was the end of my six month tour of duty on the island and I returned to Singapore for a two week holiday. On reporting back for duty, however, I was offered a further six months tour on the island, which I happily accepted!

The memory of such a working holiday will always remain with me for ever. Few people have had a such a memorable time. It's hard to fully explain the experience, but I hope I have been able to share some of my pleasures of the past with you.