Photos of pupils and teachers 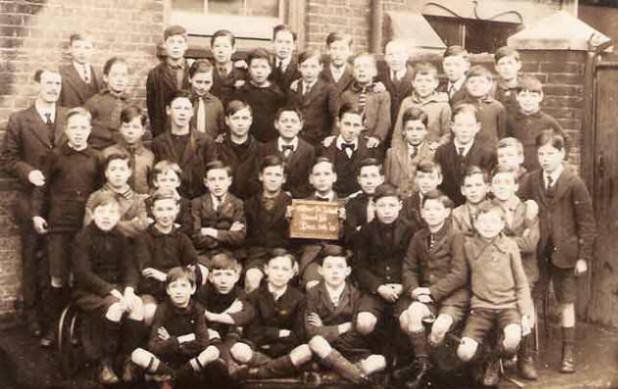 A class at Silver Street School on 5th December 1923. Photo courtesy of Eric Preedy who has no further information, as he bought the photo in a sale.

This photo is old and of a poor quality, so unlike the others on this page it does not enlarge on tap/click, although it will enlarge slightly on pinch out.

ALL THE FOLLOWING IMAGES ENLARGE ON TAP/CLICK 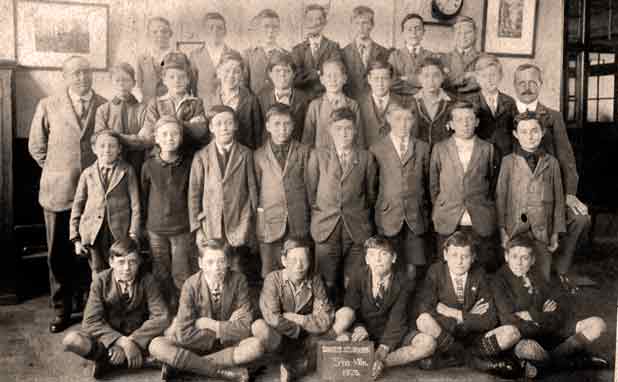 A class at Silver Street School in 1925, courtesy of Chris Whitaker. His father, Herbert Whittaker, born 1912, is in it somewhere. He believes that his uncle, Cyril Clarke, born 1912, is also in it, second row from the back, third from the right.

It is interesting to note how smart many of the boys look, wearing jackets and ties, although the ties were all different, so not school uniform. Clearly the boys dressed up for their photo.

The enlarged photo (seen by clicking this one) shows that the name of the class was written on an old-fashioned slate: SILVER ST SCHOOL, STD. VIIB.,1925

The STD is an abbreviation of the word standard. At that time, in the junior classes at age 7, children were expected to reach a certain standard in each subject. One of my uncle's school reports gives his class name as 'Retained to Standard 3C.' Through lack of interest and effort whilst in the bottom ability group (C), he was retained to repeat the work there for another year. He was not allowed to leave school until he was 15, rather than 14, as he'd hoped because he fell behind. He was the 'black sheep' of the family and aimed to avoid being selected to go to the grammar school as his brothers had done and deliberately failed to reach the standard required to move up to Standard 4. It eventually dawned on him that this was a silly move as he just had to stay in his loathed school for an extra year. He ended up rising through the ranks of a local department store, though, and eventually earned more than those who had tried hard in school. Just goes to show, not everything is about exams and school leaving certificates! 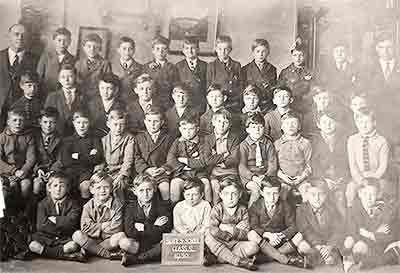 A class at Silver Street School in 1930. Photo courtesy of Joyce Wilson, whose father, Malcolm Foott is 4th from left in the 2nd row.

Cliff Crossman has got in touch to say that his father, Sidney Crossman, is almost certainly the boy far right in the front row. 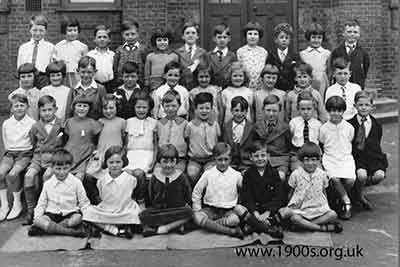 A class at Silver Street School in 1932/33. Photo courtesy of Jean Barringer (formerly Jean Reid).
Some names that Jean remembers are Eileen Elliot, a little girl with flaming red hair, and her friend Olive Crump. There was Josephine Sandy and her friend Brenda Ward. Pat Watson was a snub-nosed imp of a girl and Esme Ryman who was so smart. Jean would love to know what happened to them. She can be contacted via the webmaster 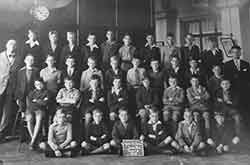 A class at Silver Street School in 1934 courtesy of Allen Flitcroft. His father Eric Woodward Jones is in the third row up, second from left after teacher. I have enhanced the slate on the floor in the centre - see the enlarged image - to show more clearly '1934, class 1B Silver Street School'. 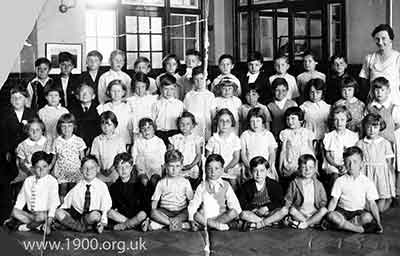 A class at Silver Street School in 1935; the teacher is Miss Chisholme. Photo courtesy of Doris Barnard.

The following three photos were taken in a corner of the 2nd floor main hall of Silver Street School in 1936. Note the parquet flooring, gas lamps and the radiator for heating. All floors were similar with classrooms running along one side. 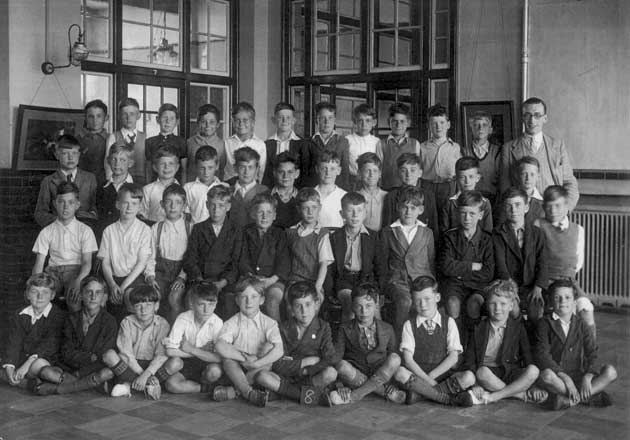 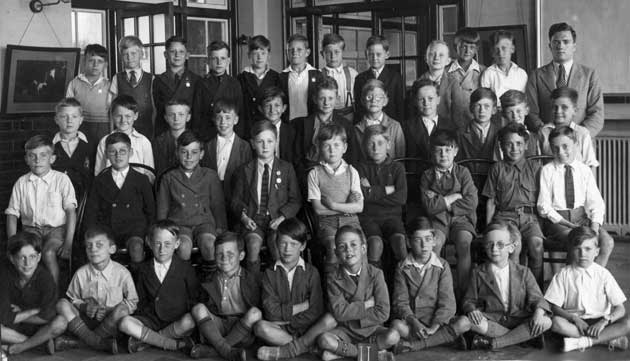 Photo courtesy of Desmond Dyer who is seated far right second row. Geoffrey Poole is at the far left at the back and Kenny Bridges also at the back second to the right of the master. Photographer R. W. Crane, Bounds Green Studios, New Southgate N11. 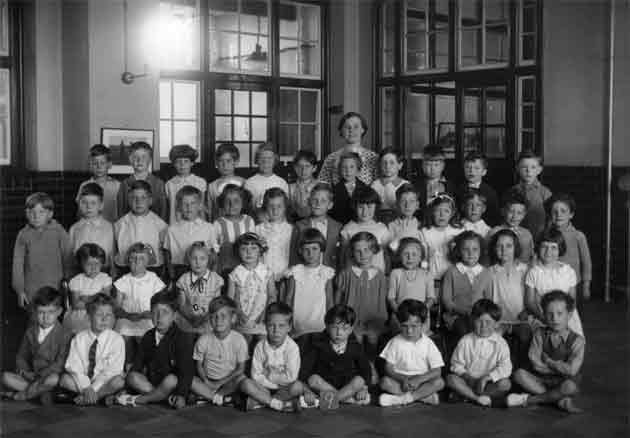 Andrew Dickson, who supplied the photo, originally dated it as 1938 on the basis of the children looking about seven years old and his sister Jean Dixon (immediately in front of the teacher, wearing a dark blazer) having been born in 1931. However Desmond Dyer has pointed out that the above two photos and this one were probably taken at the same time by the same photographer. In fact the children do look nearer five than seven. So the revised date is 1936.


The next photo is particularly special because it shows a tiered classroom. 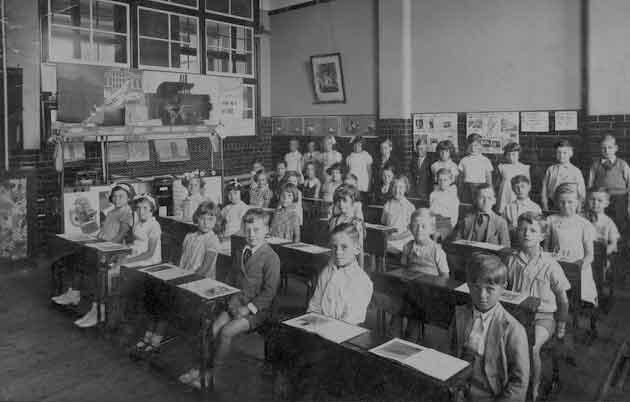 A 1937 photograph of a class at Silver Street School, courtesy of Peter Fletcher. His elder brother, Sidney, is in the middle of the front row.

The raked or tiered style classroom was probably modernised into a flat room later that year because Anne Cole, whose class photo of the following year is directly below, never knew tiered classrooms. My mother's recollections about schools in the early 1900s particularly mention the tiered classrooms. 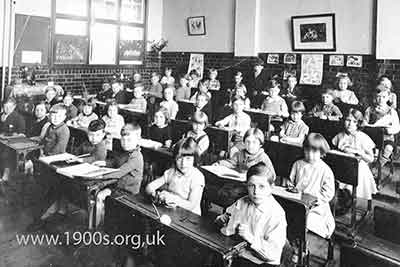 A 1936 or 1937 photograph of a class at Silver Street School, courtesy of Jean Barringer (formerly Jean Reid). 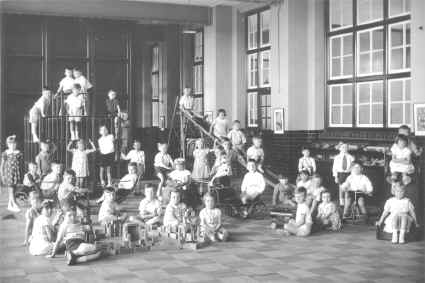 With the enlarged picture is a key to the names of the children, annotated by Anne's father. 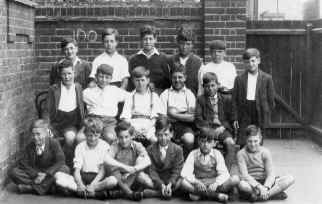 Can you name anyone? A class photo from Silver St School in the 1930s. I'm not sure of the exact date but my dad James Grimsdale, who is in the middle of the back row, was born in 1929. One of the other boys may be George MacIntyre, who lived next door to my dad in Latymer Way and was the same age. to any other faces. 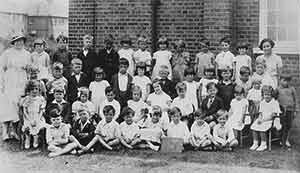 This photo is from about 1937 and is courtesy of Denise Turner whose father James Grimsdale is in the middle of the back row. One of the other boys may be George MacIntyre who was the same age as James. Can you name anyone else? 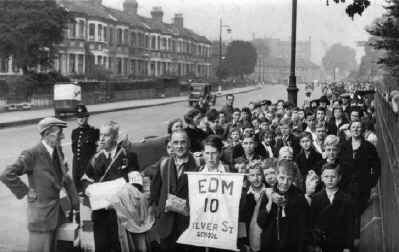 Evacuation day from Silver Street School, August 1939.
(The August 1939 date was written on the back of the photo, although other records state that evacuation started in 1940.)

The railings of Pymmes Park can be seen on the right hand side of the picture. According to Richard Cole, they were later sawn off to provide iron for the War effort. He can only remember the stumps. The tall buildings in the background are North Middlesex hospital.

Regarding the above and next photo, my aunt, Ena Cole, who was a former school teacher, responded to the call for women to help with the evacuation. She is third from the left (not counting the policeman). The whole school was evacuated on the same day and Ena's group (and possibly all the groups) went to Clacton. According to a Clacton at war website, 421 infants and juniors from Silver Street School, Edmonton started lessons at the Great Clacton Primary School off London Road on the 18th September 1939. Older children went to either the Clacton County High School, or Pathfields School (Colbaynes). When no attacks occurred initially on London, some evacuees returned home.

Note that the meaning of 'infants' and 'juniors' changed since the school was built to Victorian specifications. 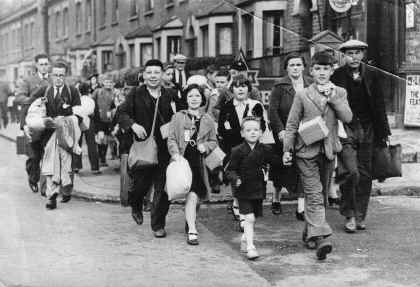 This group are just about to cross Windmill Road into Silver Street.
Both photos provided by Cliff Raven. The identification of Mr Parry comes from Andrew Dickson.
The man on the left with glasses and his mac over his arm is teacher J H I Berriman. Mr Berriman had a long career at the school from 1934 to 1973. The teacher on the right hand side is probably Mr Parry.

Little Miss Payne taught at Silver Street School around 1920 and eventually became Headmistress. She wore grey bloomers, that showed when she was on the rostrum and when she sat on the high chair at the front of the class. In fact she kept her handkerchief in a pocket in them. Despite her small stature Miss Payne used to terrify her pupils when she read with great expression: "Up the airy mountain and down the rushing glen, we daren't go a hunting for fear of little men". Nurse Faye was the nit nurse!


I was at Silver Street School in the late 1930s and recall Miss Payne as the headmistress and her sister as one of the teachers. Both were not much taller than those in the top class. Miss Payne did indeed wear bloomers and each morning in assembly these would be on show whilst she removed her hankie from her knicker leg. We were then given instructions by her on "how to blow one's nose"! To show how small she was: One day a girl ran downstairs and jumped on the back of a girl standing at the bottom. Alas, it wasn't a pupil, but Miss Payne. The culprit was my next door neighbour - Ethel Wadham (born Ethel Watson).


In the early 1930s or possibly the late 1920s, the Headmaster was Mr Stevens. Other masters I remember were Big Willy (Mr Williams), History teacher, Little Willy (Mr Williams) Carpentry and Mr Ambler, Geography. Mr Fullerton, the Music teacher who could have been the W A Fullerton inscribed on the memorial tablet. He joined the RAF in 1939 and became a fighter pilot.

If you can add anything to this page or provide a photo, I would be pleased if you would contact me. Also if there is anyone still alive who can put names to faces from the enlarged photo or add more names to anyone in the photos, I would be pleased to hear from them. New photos would be welcome.