Pupils and teachers in a typical state school in North London, early 1900s

For people and staff at Silverstreet School in later years, see the above menu.

There are also many mentions of old Edmonton throughout the site because so many of the recollections stem from there. Use the search box to find them.

This set of pages show class year photos of pupils and teachers at Silver Street School, Edmonton, north London during the early to mid 20th century.

The photos have either been provided by my relatives or by former pupils or their relatives who have visited and enjoyed the companion pages on Silver Street School, the old Edmonton locality and, more generally, early 1900s school life.

This page is about the first two decades of the 20th century. Other pages - see the side menu - are on later decades and are much fuller of information and photographs. I had despaired of ever getting photos of the people at Silver Street School early in its life, and I am extremely grateful to David Smith for providing what follows, particularly as they come from 1902, just a year after the school was opened - see its memorial plaque. 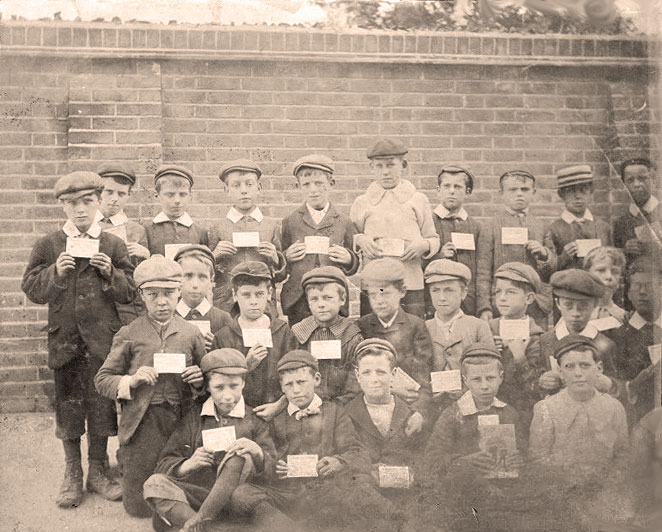 Class at Silver Street School, 1902, courtesy of David Smith. The name of the school and its date are handwritten under the original photo.

What is immediately noticeable in this photo is that the class is entirely made up of boys. Actually this is not surprising because boys and girls were taught separately in the early years of the 20th century and probably before. They even had separate school entrances and separate playgrounds.

What is also immediately noticeable is the pre­ponderance of the soft peak hats that are in so many photos of working class men at that time. This was a free state-run school in an area that was not wealthy. Was it normal for the boys to wear these hats? Or had they borrowed them specially for the occasion?

Each boy is holding a card. This probably shows his name and the class that he is in, but the photo does not give this detail, even when magnified. The practice was clearly discontinued as the photos in the later years show - see the side menu.

Other aspects of the clothes are interesting, too, but I intend to make a separate page on early 20th century boys clothes.

The photo appears to be cropped on the right-hand-side, but the original shows no cropping. The pull to the left is very surprising indeed because camera-men at that time were extremely skilled, even though their cameras could be temperamental.

The photo is probably the earliest Silver Street photo which positioned the children in front of this particular wall. It features in a number of the later photos. 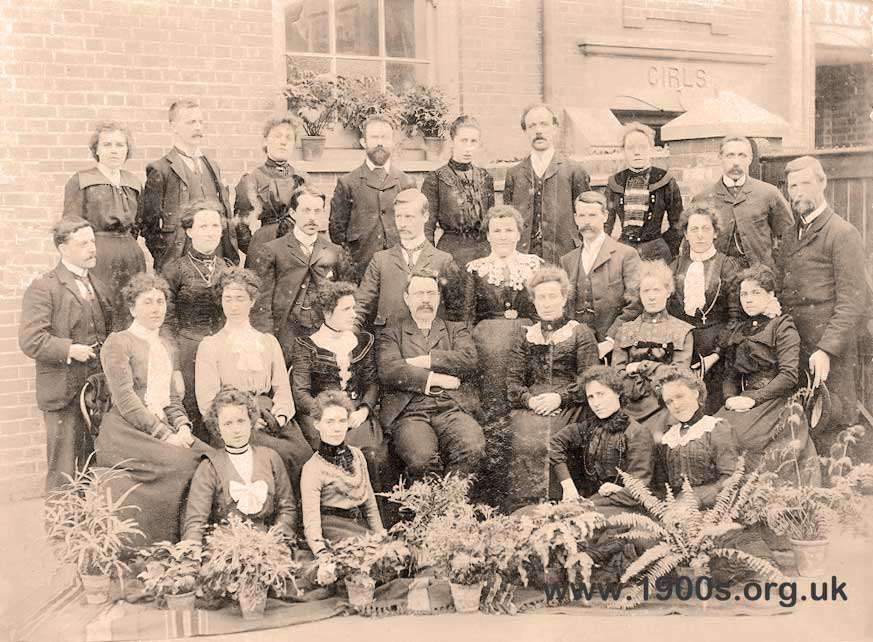 Teachers at Silver Street School, 1902, courtesy of David Smith. The name of the school and its date are handwritten under the original photo.

The clothes of these early 1900s teachers are dramatically different from in later years - see the side menu. All the women would have been unmarried, as before the shortages of male teachers in the Second World War women, by law, had to give up teaching once they married. A strange requirement, even though it is understandable that married women at that time would have been too tied up with household chores to hold professional jobs.

Another interesting point about the perceived place of women is that the younger women in the photo were required to sit on a rug on the ground. Certainly by the time that I was at school in the 1940s and 1950s, such a thing would have been unheard of.

Yet another interesting point about the photo is that it shows a profusion of pot plants arranged in front of the teachers. This too would have been unheard of when I was at school in the 1940s and 1950s. I wonder whether this was because of the austerity of the Second World War or whether it phased out earlier. Yet when I addressed audiences overseas as late as the 1990s it was common practice. Maybe it still is.

Probably the camera-man was the same for both the teachers' and the children's photos as the camera clearly pulled to the left in both. One or more children on the right were cut off but all the teachers were in.

The following photos are courtesy of Simon Benbow whose grandfather, George Frederic Benbow is the teacher on the left with the moustache. No other names are known. 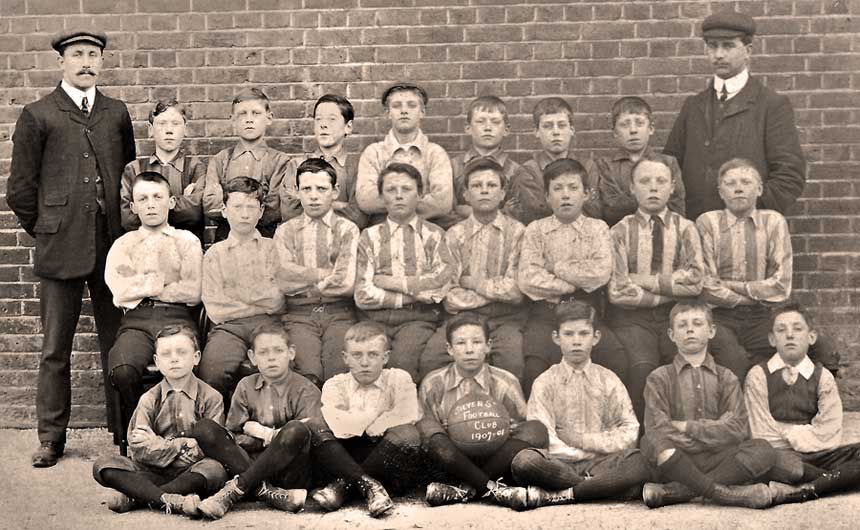 Silver Street School football team. The date shown on the football in the original photo is 1907-08. 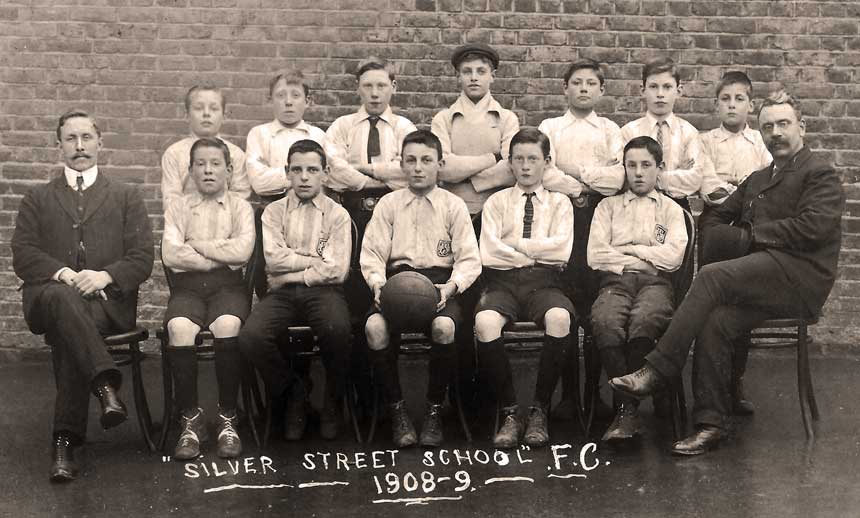 Silver Street School football team. The writing on the negative shows the date as 1908-09. 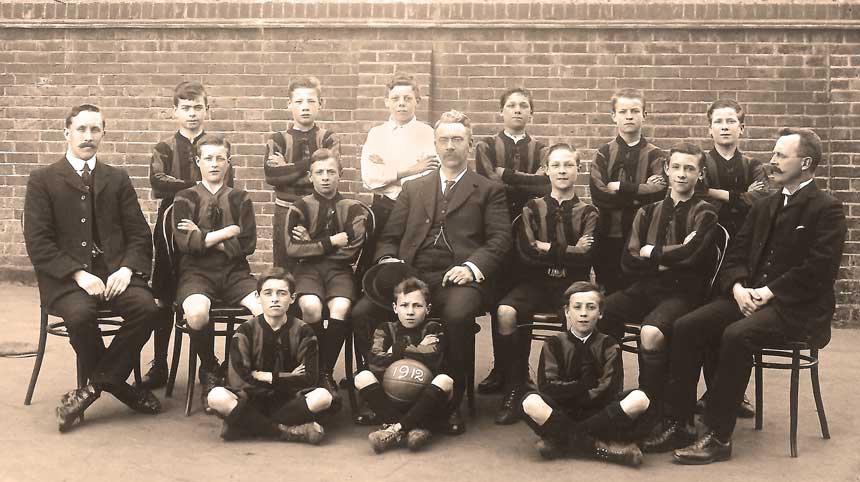 Silver Street School football team. The date shown on the football shows the date as 1912.

Silver Street School football team. The date is not shown and I have been unable to guess it from the ages of the boys who might be in other photos. Knowing George Benbow's time at the school, however, the photo can certainly be dated to the early 20th century.

This inside inscription of a book prize shows that the headmaster in 1909 was Robert Hogg. The book was 'The Swiss Family Robinson'. Image and information courtesy of Graham Hogg. Tap/click for a larger image.