This page shows class year photos of pupils and teachers at Silver Street School, Edmonton, north London during the 1950s. All have either been provided by my relatives or by ex-pupils who have visited and enjoyed the companion pages on Silver Street School, the old Edmonton locality and, quite generally, early 1900s school life.

MOST OF THE FOLLOWING IMAGES ENLARGE ON TAP/CLICK Unfortunately the quality has not allowed this for all of them, but pinching them out may help 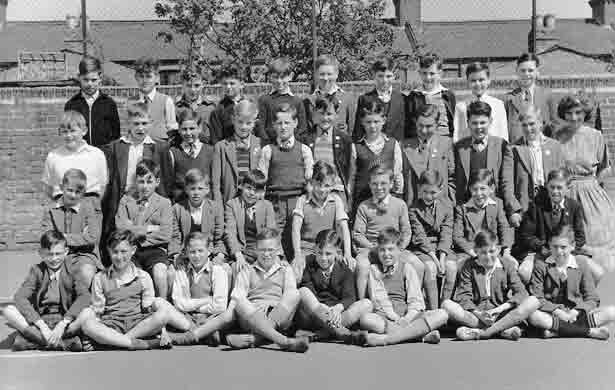 A class at Silver Street School in 1950, photo supplied by Isabelle Procter on behalf of her husband Alan Proctor who is in the photo. He has been able to identify the following names. Additional names identified by Bob Scott.

Apparently Michael Molleneaux was the only boy who had a watch at one stage, so was given the task of ringing the bell at the end of a period. 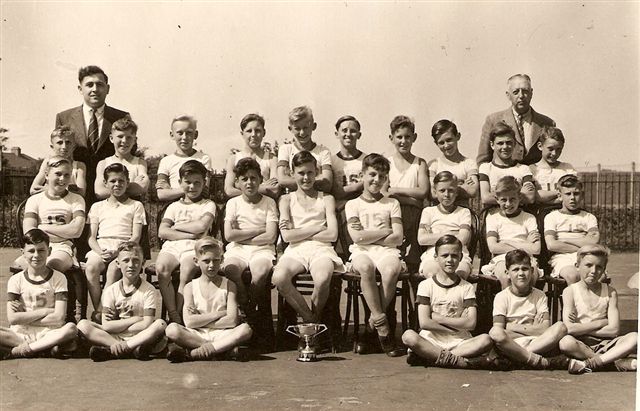 The athletic team at Silver Street School 1950, photo supplied by Isabelle Procter on behalf of her husband Alan Procter who is in the photo. He and Syd Trigg have remembered the following names: 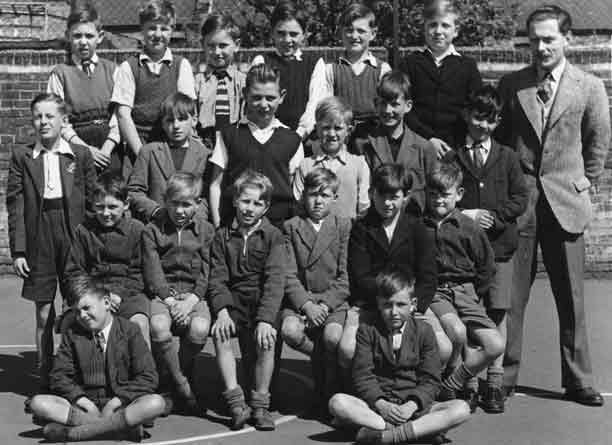 A class at Silver Street School in about 1952, photo supplied by Jacqueline Stocker (nee Coles). Her brother, Derek Coles, is in the top row, second from the left.

Leslie Dawson remembers the master standing on the far right as being ex RAF with a moustache - possibly a Mr Walters?

Can you put any other names to more faces?

Jacqueline points out that the background in the photo is the same as the 1950 one as supplied by Isabelle Procter, which means that the children must have lined up against the same wall. 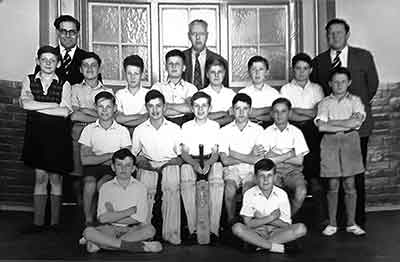 
Photo courtesy of Phil Chandler who notes that the team played home matches in Tatem Park on a prepared pitch in the centre of the concrete oval track which he thinks is now used for roller skating and skate boarding. 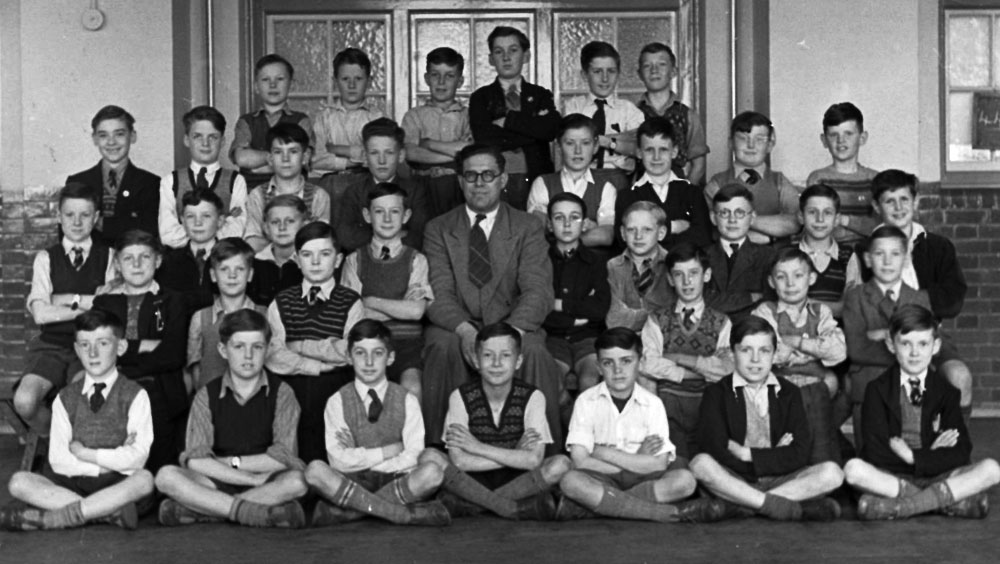 Another class at Silver Street School in about 1952, photo supplied by Ron Cartland.

Ron can remember the following names:

Can you put any more names to faces? 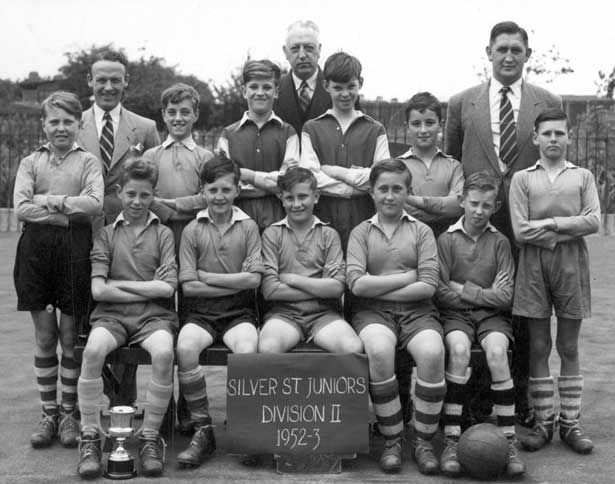 A Division II football team at Silver Street School in 1953. This photo was supplied by Ian Eaton with no additional information. The following names have been added by Peter Edrich, Colin Bewley, Derrick Lockey and Eric Preedy. 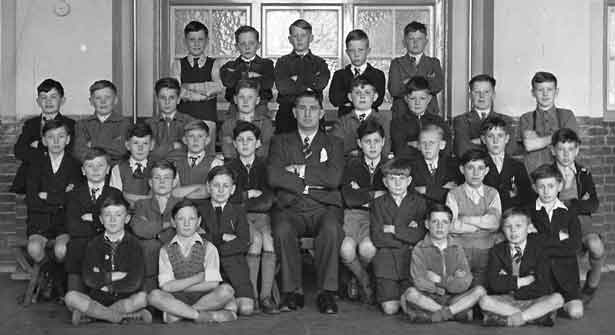 A class in Silver Street School in 1953 courtesy of Patrick French. He is first on the right in the 3rd row back.

The twin brothers Leslie Dawson (right) and David Dawson are either side of the teacher, Mr Graves, who Leslie reports was nicknamed Gravy. Leslie also reports that no-one at the school could tell the difference between the twins and just called them both 'twinnie'.

Can you remember any other names?

Patrick notes that Mr Graves (centre) was known for his use of the plimsoll. ['Plimsoll' seems to be a word that has gone out of fashion. It was a lightweight trainer, and it and the 'slipper' were widely used instead of a cane for punishment.] Leslie remembers a class 'slippering' for some misdemeanour when Mr Graves employed a large 'plimpsole' to see how many times he could wallop us as we individually crawled across the top of a desk. Slightly painful, embarassing, and unthinkable now. 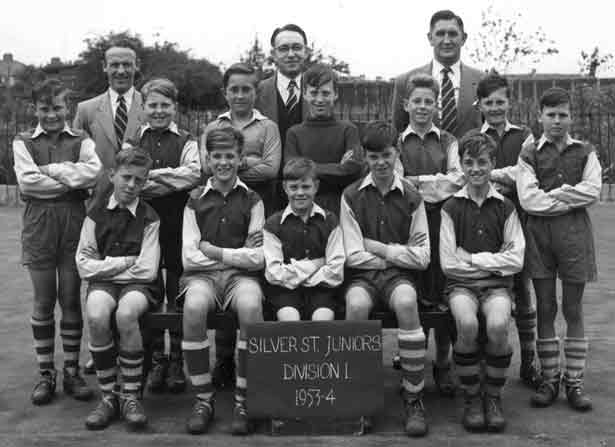 A Division I football team at Silver Street School, season 1953/4. This photo was supplied by Ian Eaton with no additional information. The following names have been added by Colin Bewley, Derrick Lockey and Eric Preedy.

Derrick reports that he had his leg broken in the last match of the season and missed school for nearly a year with complications to the tib/fib break. He was back just in time for 11 plus.

A junior team at Silver Street School, in 1954. This photo was supplied by Ian Eaton with no additional information. 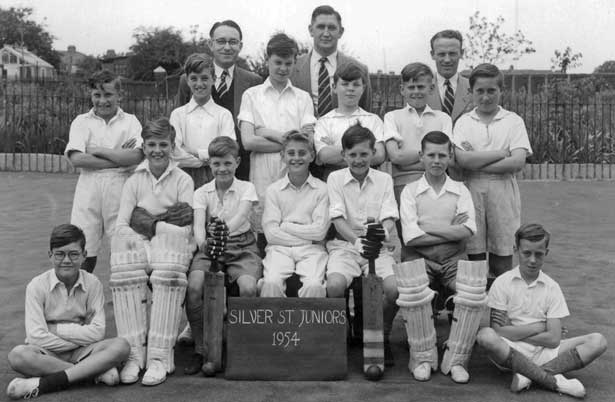 Junior cricket team at Silver Street School, in 1954. This photo was supplied by Ian Eaton with no additional information.

Eric Preedy has named the teachers from the left as Mr D.G. Griffiths headmaster, Mr Harold Graves and Mr Chapman. 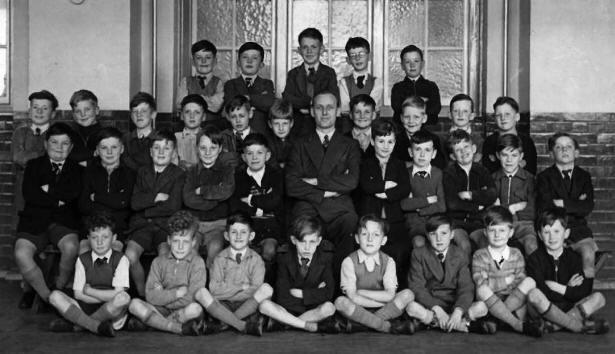 Mr Powell's class circa 1952-1953, courtesy of Peter Edrich. (U represents unknown because Peter can't call the name to mind. Can you?) Mr Robert's Class class circa 1953-1954, courtesy of Peter Edrich. (U represents unknown because Peter can't call the name to mind. Can you?)