Wedding photography before the digital age

Today, wedding photos are either taken by guests on their smart phones or by professional photographers who supply and charge for edited CDs and customers' choices of individual photos in their choice of frame size. It was not always so. The huge changes brought about by the digital revolution embraced professional photography. This page is about wedding photography in the middle of the last century - not so long ago for me, as it was when I was married.

In the mid-20th Century, the sorts of camera that ordinary people had, while still expensive, were seldom reliably good quality. There was no automatic focus or brightness contral, and photos could not be viewed in advance of seeing the printed result, which often showed closed eyes or plants seemingly growing out of heads. Such errors could not be spotted before seeing the final print which involved sending off the completed film, either to a chemist or photographers or dedicated amateur. In contrast professional photographers normally had extremely expensive good quality cameras and were experienced at setting focus distances and light levels as well as framing what they were taking.

Consequently it was generally accepted that a professional photographer needed to be booked for every wedding that considered itself in any way special.

This page is about wedding photography before the digital age.

How professional photographers made their money

The wedding couple or their parents had a choice of how much to involve the photographer. The more shots they wanted, the higher the price of his services - yes it was a 'he'; I never saw a woman wedding photographer at that time, although they may have existed. What a lot has changed.

There was a fixed price for a fixed package of shots, although photographers expected to make additional money from guests' purchases - for why this was more than is probably the case today, see below.

Favourite shots were the bridal preparations at her home; the arrival of the guests at the church, or wherever the ceremony was to take place; the bride's arival on the arm of her father - or whoever was to 'give her away' - showing an expensive black (often hired) car with its white ribbons tied on the bonnet and her dress and headdress; inside the building; signing the register, confetti throwing outside, groups at the reception which was known as the wedding breakfast and the couple's departure with more confetti.

It was normal for professional wedding photographers to finish taking their photographs after the start of the reception. The next section explains why.

Proofs at the wedding reception

It was important to get them back to get them back to the reception as quickly a possible because guests were more inclined to order copies in the euphoria of the moment than they might have been later. Also it seemed to be expected. After all, what would the other guests think if they didn't buy a photo? And guests knew that any amateur photos that someone may have taken would probably be poor quality.

All this was well-known to the photographers of course, so it made financial sense to them to ensure that the proofs and the means of ordering were on display at the reception as early as possible.

The photographers sent out the completed orders later by post.

The immediate family and the bride and groom generally bought albums rather than individual photos. These came in covers of white leather or simulated leather, embossed in silver lettering with appropriate words, and containing the printed photographs of choice. The photographs were always black and white, and bound with each photo was a protective page of tissue paper. 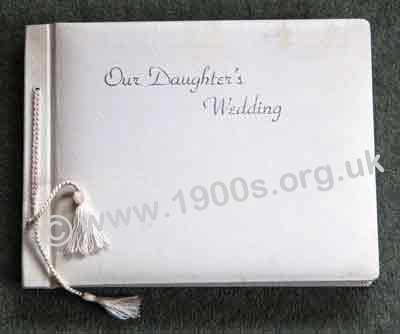 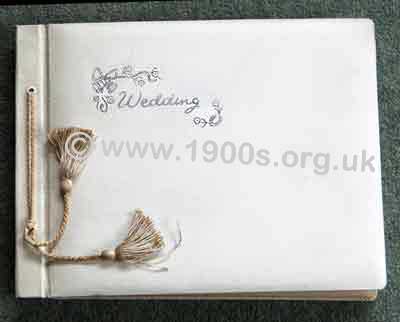 Normally guests' photos were rather poor quality and in black and white. At my wedding, though, in 1962, one guest was ahead of the game and had colour slides film in a high quality camera. Much later, I was able to get coloured prints from the slides which worked really well.