In the 1960s, everyone interested in photography seemed to be experimenting with the relatively new film that produced colour slides designed to be projected onto a screen. 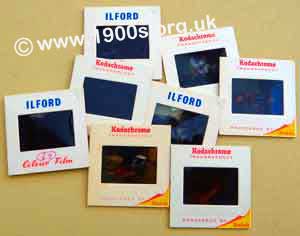 As far as I remember, all the standard film manufacturers produced film for slides, with different speeds according to the anticipated lighting conditions. Some of the main names were Kodak, Ilford and Agfacolor. There were normally 24 or 36 shots to a roll of film.

The film for slides was sold in black plastic canisters which, apart from the labelling looked no different from the 35mm film for making ordinary prints. The canister needed to be kept for taking the used film for processing.

Processing was either at a chemist or at a specialist camera shop. The black canisters were returned with the processed slides and were useful for storing all sorts of small things.

The arrival of the processed prints and slides was always eagerly awaited because, just as with the old print photos, there was no way of knowing what a picture would look like until it came back from processing. Sometimes, a whole batch would be black!

Slides arrived back from processing in boxes like the one shown in the photos. The top parts were transparent plastic and the lower parts always seemed to be yellow. I do, though, remember seeing the occasional one made of stiff card. 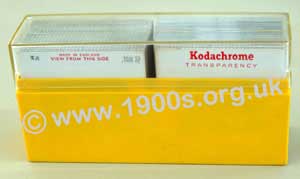 Box of colour slides as received back from processing 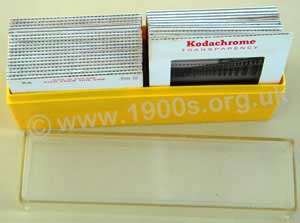 Each slide arrived in its own individually numbered frame which could be either plastic or card.

Colour slide photography was not a cheap hobby unless you could use someone else's screen and projector.

The photo shows a typical slide projector which happened to be my father's projector. It took two slides at a time in that while one slide was being shown, the slide in the other side of the carrier was removed and replaced with the next one for showing. Then, to show this new slide, the carrier was slid sideways, and the process was repeated. 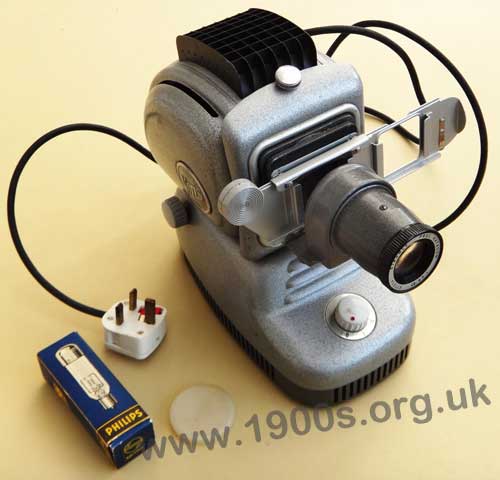 Basic version of a slide projector for which slides had to be loaded one at a time during the slide show. Also shown are the lens cap and a spare replacement bulb. Note that the plug is wired onto the cable, rather than moulded on. It was normal, for some time after the 13amp plugs were introduced, for equipment and plugs to be sold separately.

My father-in-law had a more expensive projector, which was typical of those for more professional use. It took all or most of a box of slides in a carousel which could be loaded in advance of the slide show. This of course made the projection run more smoothly for both the audience and the projectionist.

Loading the slides into the projector could be tricky. They had to be loaded upside down and right to left because of the lens inverting them. Fortunately, the right way round was indicated by markings on the slide's frame, placed there at the time of processing.

Slide projectors and screens were so bulky to store that it was often too much bother to get them out. Also they viewed badly other than in the dark. This limited the number of times that slides were viewed. Small personal slide viewers got round the problem. 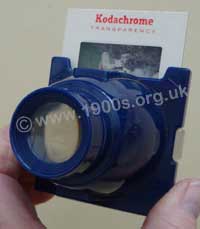 Personal slide viewer for use with natural light 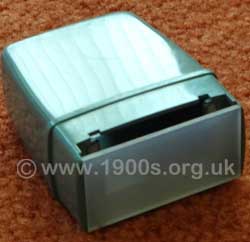 There were a range of these viewers but they all worked on the same principle. You inserted a slide into a slot and viewed it through a lens close to one eye. You needed to ensure that enough light was transmitted through the slide and that it was diffuse. This was accomplished by a small 'ground glass' panel which was probably some sort of translucent diffusing plastic.

In the cheaper versions of the viewer, daylight had to suffice, which meant that the viewer had to be held up to a window. There were, though, more expensive battery operated viewers which supplied their own light. The action of inserting a slide turned the light on.

A standard present for a slide enthusiast was a slide storage box with separate slots and means of labelling for each slide.

Unfortunately, all too soon slide boxes got filled up and new ones never seemed to match or store neatly with the older ones. Furthermore the careful labelling of the slots inside the boxes was turned into disarray when slides were taken out and rearranged for different purposes. 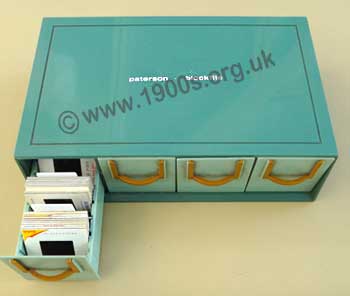 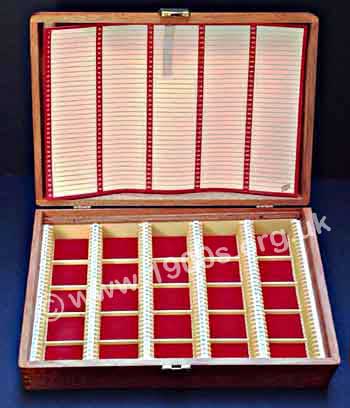 So I always preferred to keep my slides in the boxes that arrived back from processing, and I labelled them with the date and the locations of where the slides were taken.

I am sure that some of these events must have been pleasant and informative experiences, but all too often they were at best boring and at worst embarrassingly painful. Whereas flipping through a photo album could be at one's own pace, having to politely find something enthusiastic to say about each slide was something to be dreaded.

Furthermore, at times, the host invariably put slides into the projector the wrong way round, so that they appeared upside down or left to right on the screen. At first this could be amusing, but the amusement soon wore off.

So, what with the bother of having to get out the viewing equipment and the increasing awareness that holiday slide shows were not always enjoyable, such shows tended to fade out.

I have scanned all my family's slides that I considered worth keeping, stored them all on my computer - and backed them up! - and I have printed out the special ones for photo albums.