This is a page of the smaller shops that I remember from the 1940s and 1950s. In some ways they had changed little since earlier times. This website has many pages about shops and so you may also like to read about shops of the early 20th century.

There was a Boots chemist in Edgware and an individually owned chemist called Derek Clarke (no relation to my Clarke family).

The chemists were little different from the Edwardian chemists that my mother described.

I can add something though, as I had a holiday job in Boots. All goods had to be wrapped goods up in brown paper parcels and tied with string. This was extremely labour intensive, but it did teach me how to do up parcels.

I also had an experience with the flasks of coloured water that had to be shown in the shop window. The permanent shop assistants were getting bored with the task of making them up to change the window display and let me do it. There were two of them of different colours, and I labelled one as the prescription for me and the other as the prescription for my then boyfriend.

There was a W H Smith newsagents shop in my home town of Edgware. It was essentially a bookshop, but it also sold newspapers, magazines and stationery.

There were always street vendors selling newspapers at the entrances/exits to the station to catch commuters, and they did a good trade, whatever the weather.

We never had newspapers at home when I was a child in the 1940s. Money was always short and all the news was on the radio, known as the wireless, anyway. Also we went to the cinema, known as the pictures, and there was always a Pathe News between films. 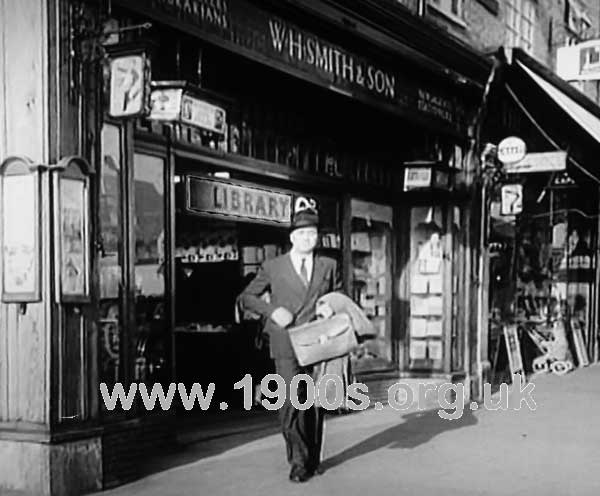 W H Smith newsagent. The notice above the entrance shows that it was also a private subscription library.

There was only one furniture shop in Edgware, which I remember. It was called Times Furnishing and looked very grand to me, as a child, because it had large windows and a large shop floor. That must have been well after 1945 when the Second World War ended because during the war many furniture shops closed because they couldn't get the stock. Times Furnishing closed in the late 1950s and the Green Shield Stamp tower was built on its site.

There was another furniture shop which I don't remember because it had to close shortly after the beginning of the Second World War. It had been called Oustons, and had been owned and run by the Ouston family. My mother always bemoaned the fact that it had had to close. When she and my father married in 1938, they had used it a great deal to set up home.

There was a photographic studio more or less opposite W H Smiths. The photographer's name was Mr Dixon, and we had several photos taken by him there. (I still have a couple of photos with his stamp on them). Later on, the studio slowly turned into a camera shop. It was the first shop in what is now the major Dixon camera-shop chain.

Lewis the tobacconist shop can be seen close to the corner on the left in the Edgware photo. My mother's visits there were not only to buy cigarettes for my father who, like most men of the time, smoked. She would also buy pipe cleaners in the form of cotton-padded pliable wire which she used to curl up her hair overnight.

Over time, tobacconists combined with newsagents.

Although to the best of my knowledge there was no dolls hospital in Edgware while I was growing up, I certainly heard parents, aunts and uncles mentioning them. Vera Harding writes from her childhood in Edmonton.

"My brother sometimes rode up front with the dustman on the his horse-drawn cart, helping him down our road. One day he brought me back a discarded doll with no arms. That was no problem as it got taken to the Dolls Hospital (a shop down at the Fleece on the main High Road) for new arms to be fitted."