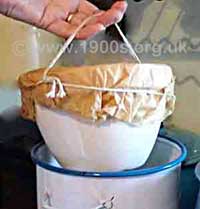 All the food that we ate when I was a child in the early 1900s had to be fresh and freshly prepared because there were no fridges; and all the cooking had to be done on a coal fired cooking range. If you bear this in mind, you will understand why our menus for the week were more or less fixed, although of course there were always the slight variations and treats.

On Sunday there was always a roast meal - and I mean always - because it provided the framework of menus for the rest of the week. It has its own page.

It wasn't uncommon on a Sunday evening to have cold meat and left-over vegetables for supper, followed by cold fruit pie.

Monday was washday and my mother had no time to do any significant cooking. For dinner [lunch] when we came home from school, we always had cold meat from the previous day's Sunday roast, served with bubble and squeak which was fried mashed-up cold vegetables, again from Sunday's lunch. We ate these with mustard pickle that one of us children had to go and buy from the shop at the shop at the end of the road. We had to take our own basin. It was sold from large jars and cost 1 or 2 coppers.

Tuesday for ironing day which was was still busy for my mother. So our dinner was the same as Monday's. This usually saw the last of the meat that could be sliced and eaten cold.

The remainder of the Sunday joint was made into a stew for Wednesday. For me, the best part of this meal was the suet dumplings that went with it.

The Sunday roast was finished by Thursday, but we still had a good dinner during the rest of the week. What we had varied. Sometimes, for example, it was meat rissoles; sometimes it was meat pudding. I often had to go out before school to buy the meat for the dinner and it was always ¾ lb of leg of beef and a ½ of beef suet. I used to really enjoy these meals. Other everyday meals that I particularly remember are on a separate page.

Meals which were the same every day: breakfast and tea

Breakfast and tea were the same every day.

My mother always told me that there was cocoa and bread and cheese or dripping at bedtime, but she does not record it in her written recollections. Probably she didn't regard this as a proper meal.

My father went to work very early and came home to breakfast which was usually bacon for him and porridge for us children. The porridge was not at all refined but coarse with a good many husks which I used to line up round the edge of my plate. It was made with water and sweetened with brown sugar. We did have milk on it but not very much and it was always cold, poured on once the porridge was on the plate. It made me think of a moat from my history book.

When we children came home from school at the end of the afternoon, tea was simple: bread and jam or bread and dripping (from the Sunday roast) and a slice of cake if any was left from the Sunday baking.