In the 1970s, the publication of books, magazines and newspapers was going through a period of massive change. Whereas letters and symbols had been typeset for printing presses, now photographic reproduction was coming into its own.

The meaning of camera-ready copy

Photographic reproduction involved photographing and reproducing from a paper original which was known as 'camera-ready copy'. There were strikes of newspaper staff in Fleet Street over its introduction because of fears that it would put their jobs at risk.

Progress cannot ever be held off for long. So the move among various book publishers was to require authors to supply their final manuscripts as camera-ready copy. Publishers did of course comment on and approve drafts during the writing process and they also arranged for professionally produced front covers, so that prospective customers' first impressions were of a fully professional production.

Unfortunately, though, with the tools at their disposal, neither authors nor typists could produce a really professional looking job.

The inferior appearance of camera-ready copy from standard typewriters

For many authors, supplying camera-ready copy simply meant obtaining the services of an accurate typist who would type the manuscript from the author's handwriting using a regular typewriter. However the resulting appearance was inferior to that of the older typeset books and today's productions, as is obvious from the followinf image. 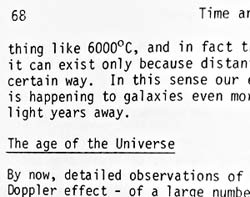 Section of a page of a published book with its camera-ready copy produced on an old typewriter with only one style, size and width of font.

Nevertheless, camera-ready copy produced on a typewriter was cheaper than type-setting for publishing houses. So, until superior technology came along, it was quite common.

Around this time, typewriters started to improve significantly. Electric typewriters meant that typists did not need to press evenly on every key because an electric motor controlled the pressure.

IBM machines achieved uniform typing by the characters being on a single ball of key heads which rotated and tilted according to which key was pressed. They were known as 'golf balls' and were indeed about the size of golf balls. There were several advantages to them:

I used golf balls a great deal for producing camera-ready copy for books that I co-authored in the early 1980s, and I had quite a selection of them in order to display different fonts. In use they were noisy things though. 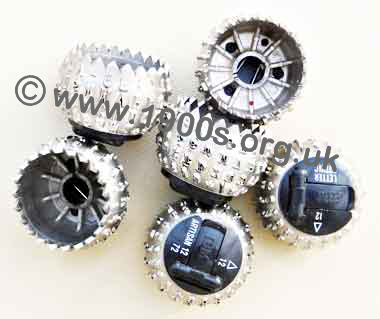 A selection golf ball print heads. The name of the font is in white letters on top, next to the clip that opens up and snaps the font into position on the typewriter.

In a later development of electronic typewriters the golf balls were replaced with lighter flatter, plastic printheads. These were known as 'daisy wheels', a name descriptive of their appearance, as is obvious from the photograph.

I had a selection of daisy wheels too, in order to print different font sizes and styles. 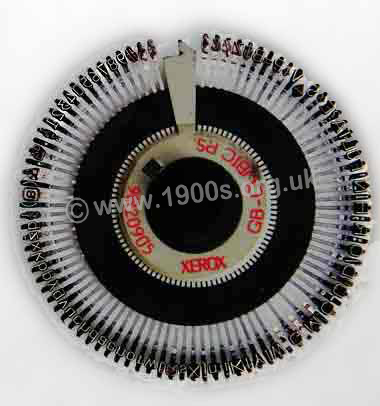 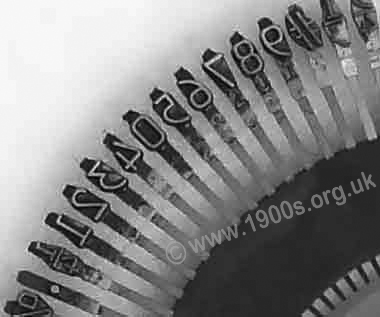 Detail of part of the print head

I had a consultancy with IBM around this time where operators working at linked consuls used an early text-editing system on a central computer known as a main frame. Printouts were collected from a central printer. It wasn't quite what is now understood as word processing because it involved typing special symbols round words or phrases that one wanted to be bold or italic, etc. However it was almost certainly the forerunner of word processing.

Computers dedicated solely to word-processing later became available for individual use, and most large organisations seemed to buy them for their typists. However use of these machines were short lived, soon to be replaced by word processing software running on personal computers - not that this was as sophisticated as what we know today.

A separate page describes how my family prepared camera-ready copy for one of our books.