New things on and off ration in and after WW2 UK 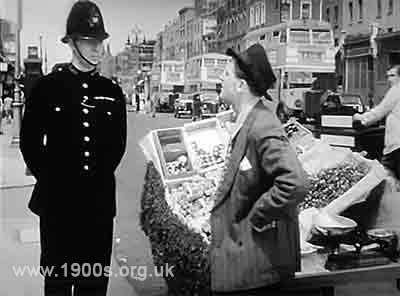 Goods sold from a barrow, probably illegally. Note the scales for weighing.

I never saw any shops or market stalls selling cut-price or rationed goods during World War Two and the austerity, afterwards. What I do remember are what was known as barrow boys who sold goods from a large barrow on wheels. The photo gives the idea, although what barrow boys sold was not generally the fruit and veg shown in the photo. It was such things as cut-price and off-ration clothes, ornaments and tools. Where they got their goods from is anyone's guess. The point is that they sold goods which were rationed or scarce and they didn't want or need customers' ration books.

Where to find barrow boys

Barrow boys, knowing that what they were doing was illegal, were always on the look-out for policemen, and if they saw one coming would trundle their barrow away as quickly as possible. They normally worked from somewhere that had rapid escape alleyways.

Somehow, after the end of the war, ordinary people didn't seem to mind using barrow boys, although they would never have broken the laws on rationing while the war was on. I remember my mother buying something from one of them along London's Oxford Street. She gave him a pound note but he instantly rushed away pushing his barrow as fast as he could. She was left standing there without her change and with amazement all over her face. She found out later that he had seen a policemen coming.

He shouted back at her, "Round the corner!" and when she followed him there, he gave her her change. So he hadn't meant to defraud her. Actually the policeman must have seen what was happening, but chose to turn a blind eye.

Barrow boys did a good trade and were well customised by the public.

Utility goods were manufactured for the domestic market. They were basic and functional but not appealing, and they could be bought legally, although they were of course on ration.

To show that new goods met Government standards of approval, they had to show what was known as the 'utility mark'. It is shown in the image. The 41 on its right probably indicates that the mark became a requirement in 1941. I understand that the two Cs in the rest of the mark were intended only as a design feature.

In the remaining ten years of the mark's use, the 41 was not updated. As a child, I saw a lot of it and never questioned it.

The utility mark was commonly found on clothing, but it was also stamped or otherwise marked on other goods, like furniture.

The 'utility' mark sewn onto clothing

Utility goods, like so much else, were rationed at a certain number of points from customers' ration books. Like everything else, they almost always still had to be queued for.

The black market was an illegal trade which enabled people to buy what they wanted off-ration at exhorbitant prices.

Young British women who befriended American soldiers would get gifts from them like nylon stockings, which were simply unavailable in our British shops. Young women who were not so fortunate would often stain their legs using cold tea or Syltona liquid.

Living as I did in Edgware, I never saw an American soldier during the war, but I knew that they were regarded as having no shortages at all. (This still puzzles me, as presumably the merchant seamen who brought their luxuries were risking their lives to do so. Or perhaps the goods were flown in.) My cousin did see American soldiers and got chewing gum from them.