Bevin Boys and my experiences as one

As told to the webmaster by Peter Dickens, former miner/Bevin Boy

What were Bevin Boys?

Bevin Boys were young British men conscripted to work in coal mines instead of the armed forces in the Second World War. They were named after Ernest Bevin, a member of the Labour Party, whose idea it was, and who was Minister of Labour and National Service in the Coalition Government of Winston Churchill.

Why were Bevin Boys needed?

At the beginning of the war, mining was not a reserved occupation, so young miners were conscripted into the armed forces, just as young men in other occupations were conscripted. Some young miners volunteered for the armed forces - possibly for reasons of patriotism coupled with a desire to leave the mines. Since many of these young miners had been employed at the coalface, it became necessary for them to be replaced by older miners. The work was hard, and some of the older men found it difficult to work for a full week. So a shortage of coal arose at a time when the need for it was increasing due to the war industries.

To compensate, Ernest Bevin announced that all men being called up for National Service could opt to serve in coal mines instead of the armed forces. Not surprisingly the response was inadequate.

How were Bevin Boys selected?

So towards the end of 1943 it was decreed that 10% of every call-up batch of young men would serve as miners. The selection of which 10% was made on the basis of the National Service number which every new recruit was given at enrolment. A digit between 0 and 9 was arbitrarily chosen for each batch of intakes, and everyone whose National Service number ended with 9 was directed to a coal mining area for training.

National Service numbers were kept throughout the period of national service. So Bevin Boys would be released from the mines at the same time as the release of the men in their enrolment batch who had served in the armed forces. Not that this necessarily happened - read on ...

My experience of becoming a Bevin Boy

Some years before my call-up, I had joined the local branch of the Air Cadet Corps, which the government formed with the purpose of giving training which would help when joining the RAF. Accordingly I had thought that I would be called into the RAF when I attained my call-up age. I even attended a pre-joining RAF medical some weeks before the due date. A few weeks later, though, I received a letter which stated that the last digit of my National Service number matched the one picked for the coal mines. Enclosed was a railway warrant to Stoke on Trent, where I was to be given accommodation and training before attachment to a mine in the North Staffordshire coalfield, 150 miles away from where I lived.

My date of call-up was 7th February 1944, my eighteenth birthday.

How I felt about being conscripted to work in a mine

I have often been asked this question.

Becoming a miner was certainly not what I and most of my colleagues wanted but there was no alternative open to us and the work had to be done. Therefore we accepted the situation and knuckled down to it. My parents were more concerned than I was.

Many of us had reservations of course, not knowing whether claustrophobia would be a problem, but fortunately it did not prove to be a worry for me. Two of my intake, though, did get exemption on the grounds of claustrophobia. They immediately volunteered to be commandos.

The training lasted for six weeks and was divided into two parts.

The first part lasted four weeks and consisted of alternate days in a lecture room and underground in an old pit which was no longer in production. We were given instruction on the working and layout of pits (mines), the safety procedures and general advice on how to behave. In both the lecture room and underground we were instructed by experienced old colliers (coal miners).

The second part of the training which lasted two weeks consisted of instruction in haulage work above ground.

At the outset, I stayed with another Bevin Boy in lodgings run by a landlady. I had a bedroom, the use of a bathroom and toilet and reception rooms.

After I started working on the night shift, though, this was not practicable and I moved to another lodging where I was alone.

The landladies washed my clothes twice weekly and provided clean sheets each week. My clothes and bedclothes were not especially dirty. Although coal got under my skin, due to knocking my knuckles etc., my body was clean after the daily bath.

The landladies also provided my breakfast and evening meals plus mid-day meals at weekends. These were normal wartime fare, dependant on rations, and were reasonably adequate.

The contents of my lunch box was my choice. We collected a sandwich, normally meat, before going down the pit. I can't remember who paid.

Travelling to and from the mine

I went to work in casual clothes and according to the weather either walked or went by bus to the baths which were almost two miles from my lodgings. There I changed into work clothes and left my travelling clothes in a locker. We miners and Bevin Boys were then taken by covered lorry to the pithead.

There was no clocking in. Our lamps had to be collected before a fixed time and if we were late we could not go down the pit and hence got no pay.

At the end of the shift the whole process was reversed except that the journey from the baths to my lodgings was almost always by bus.

When I became a Bevin Boy in 1944 my pay was £5 per week. I was provided with a pair of boots with steel toe caps and a safety helmet but no other clothing. Other necessities such as lodgings, kneepads, water bottle, 'snapping tin' (lunch box) I had to pay for myself.

I had always been a sporty type and played many ball games in and out of school. Accordingly I took any chance to get involved in any opportunities to play cricket or football, though these were fairly rare. I was able to watch both games throughout their playing seasons, though, and I also went to the cinema and generally socialised.

Recognition after the war

During my several interviews with Peter Dickens, he never mentioned the widespread dissatisfaction felt by Bevin Boys at their treatment a the end of the war, and at that time I did not know to ask him. What I now know is as follows:

The lack of recognition was formally, but belatedly, addressed as late as 2008 with the Bevin Boys veterans badge. 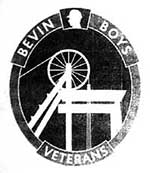 The veterans badge was:
'Presented with the Compliments of the Minister of State for Energy 'in recognition of your valuable contribution to the war effort'

Before the award of the medal, in 1989, interested individuals formed the Bevin Boys Association. It started in the Midlands area with just 32 members, but according to Wikipedia the membership grew to over 1,800 by 2009 with membership from all over the UK and overseas. 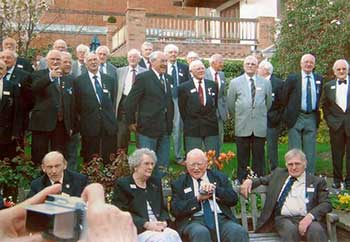 At the Bevin Boys Association Dinner, 2008. Peter Dickens is centre, back row. 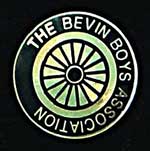 Detail of the badge

Reflections on having been a Bevin Boy

By the time that my period as a Bevin Boy had come to an end, which was after 3 years and 8 months, the nature of the work had given me an awareness of the need to be able to improvise, and this has proved of great advantage in many spheres in what are, today in 2014, the 67 subsequent years.

It was an interesting experience. Although it was not what I had wanted to do, I was privileged to meet and work with experienced miners in a completely new environment. The camaraderie was wonderful, and it is difficult to imagine better support being available in any group.