A coal mine in WW2: the miners/Bevin Boys and other workers

The mine where I worked as a miner/Bevin Boy was Hern Heath Colliery. At that time there were three coalfaces in production.

Ventilation in the coal mine

Ventilation in underground coal mines has always been vitally important. It is important for clearing explosive gases and clearing the air of coal dust, quite apart from the human need for fresh air. 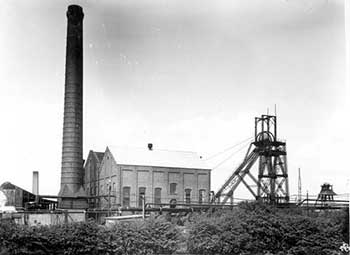 Hern Heath Colliery as it was in the time of the Bevin Boys. Photo courtesy of the National Coal Board.

The ventilation was so good that miners sometimes felt quite cold when they stopped working.

There is an excellent explanation of mine ventilation along with helpful illustrations on the National Coalmining Museum website.

The lifts in the coal mine

The lifts were used to transport men, materials and coal into and out of the pit. They also blew fresh air into the mine and helped extract stale air out.

My first few experiences of going down in the lift were quite dramatic because the lift seem to drop like a stone on its half-mile length of cable. Over such a long length, the cable had some flexibility, so as the lift neared the bottom and the automatic brakes went on, the lift bounced up and down quite considerably. Fortunately it didn't take long to get used to this.

In the mines that I knew, the lifts were known as 'cages'. The name was quite apt because the sides were made of strong mesh.

The pit officials were a manager, an under manager, overmen and firemen. All were qualified to use explosives and were required to carry a Davy lamp when in the pit to enable them to test that no gas was present. In fact, anyone having shot firing qualifications was able to use explosives. 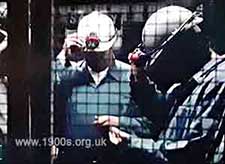 The mine lift, also known as the cage

The manager and under manager made regular visits to all pit locations but spent a large part of their working hours above ground. Both they and the overmen also carried powerful handlamps to enable them to see farther ahead and to look into waste areas along the coalface.

Most underground activities were controlled by overmen and firemen.

Non-coalface workers included crutters and rippers. Crutters drove new roads through rock to enable new seams of coal to be reached and rippers maintained the height of the roadways by replacing roof supports as required.

Where necessary an official allotted jobs at the pit bottom. Bevin Boys were, at least initially, grouped with other workers working on haulage and sundry other jobs. The location of any job would dictate how long it would take to walk there. Sometimes this could be as long as 20 minutes. Mines were large places!

There were three eight hour shifts daily, each having one short break in the middle.

The morning shift was called the 'drawing' shift and was when coal was removed from the mine. Miners called loaders were responsible for loading a length of the coalface and for the erection of the roof supports. Every coal face had a miner called an overman in charge. An under-manager would be in charge of every working section.

On the morning shift most of the workers would normally be either coal face workers or auxiliaries. Auxiliaries was the name given to haulage personnel who might be stationed anywhere between the pit bottom and the hopper where the tubs were loaded.

The afternoon and night shifts

The afternoon and night shifts were for preparing the coal faces for the morning 'drawing' shift.

The coal faces were hives of activity during the afternoon shift. A coal cutting machine, somewhat like a huge chainsaw, was used to undercut the seam for the whole length of the face. Holes were then drilled for shot firing.

The packers packed rubble and waste rock into the space vacated by the coal, so helping to hold the roof up.

Afternoon and night shifts worked from Sunday to Thursday so that preparation was made for the Monday morning shift.

Certain planned maintenance work was carried out over weekends.

My experience on the shifts

When I first came to the pit I worked initially on the day shifts. I was given no fixed activity and worked wherever I was sent on arrival at the pit bottom. The work could be on any part of the haulage system.

A job that I and others hated was the unpopular one of servicing what was called 'the plough'. It was a piece of metal placed obliquely across the bottom of the belt conveyor to scrape off any debris that had become stuck to the belt. My tasks could also be other ancillary work on or off the coal face.

After several months of working on the dayshifts, my back was injured in a shotfiring accident. Although it didn't seem too much to worry about, I was taken to hospital for treatment and told to go back for a check-up a week later. At the end of this period I was able to resume work but was placed on the night shift, on which I remained for the rest of my time as a Bevin Boy.

Being on the night shift the work was more interesting. Firstly, I worked mainly with a pair of rippers although only on manual loading work. I assisted the fitting of replacement arched supports in the roadways. This work was still on minimum wage basis although the rippers were paid piecework. Often they passed me some 'beer money' on pay day.

After a few months, I was instructed to work with a conveyor fitter who was without an assistant that night. As we got on well together, he asked the overman if I could be his regular mate. So this became my nightly work for the rest of my time in the pits. It was mainly to extend the belt conveyor and check the face shaker conveyor to check that it was ready for the day shift. At the end of my employment I was allowed to deputise for my mate, with another helper, on the few occasions he was away from work.