Hazards and danger in coal mines

The hazards ever present in coal mines

Mines have always been hazardous environments and the period while I was a miner/Bevin Boy during and after the Second World War was no exception. Major hazards included fire, flood, noxious and inflammable gas, explosion and roof collapse. Also personal injury could take many forms and was particularly dangerous because the lengths of the tunnels and the depth underground meant that access to medical attention could take a considerable time.

Safety and the size of mines and pits

Mines and pits vary in size and capacity with about 10 to 20 men in small mines to a some hundreds in some of the larger pits. Whereas it is relatively easy to get people out of a small mine if there is a problem, it is very difficult and time-consuming to get them out of the larger pits quickly. There may only be one main shaft with a winding engine and double cage system which can only extract a limited number of men on each lift.

Safeguards against danger and injury

To minimise danger, numerous regulations were in place from the various Coal Mines Acts and other documents on work in the mines. These were particularly concerned with ventilation, use of explosives, use of electricity within the mine, first aid provision and health and safety.

Ventilation was of prime importance to ensure good working conditions. Air circulation was achieved by use of fans from the downshaft and back up the upshaft going through all the main roads (tunnels) and workings. Normally all roads had two exits but where new headings (spurs) were being created, this was not the case. So there were limitations on the numbers of workers allowed in the headings.

An enormous improvement in mine safety was due to Humphry Davy who invented the miners safety lamp in the previous century. This proved the end of animals and canaries being used to detect gas before the human nose could do so. The sketch shows the lamp.

The lamp is an oil lamp with a wick which is lit. The flame from the wick is totally enclosed in a metal mesh with holes which are too small for flames to pass through. This reduces the danger of explosions in the presence of flammable gases. Also the flame changes colour to alert miners to the presence of hazardous gas.

However, an improvement as the lamp was, it did not mean that mining was totally safe in the early-mid 20th century.

The value and limitations of the safety lamp

Although the invention of the Davey Safety Lamp was such a big step forward in the increased safety against gas explosions in mines, it in did not stop mine explosions. In particular, some miners continued to use their usual candle because a candle gave slightly better light.

I well remember as a child in the 1940s listening to the radio, the wireless as it was then called, and hearing daily bulletins on the ongoing successes and failures to get miners out of mines after a rock fall deep underground.

It was reported to me that Frank Dibna in one of his television quoted that before 1920 a miner was killed every 6 hours. Presumably safety improved after that.

The check on which miners were still underground 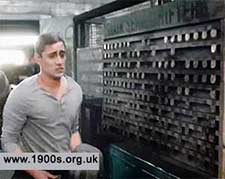 Miner collecting his disk on the way into a mine.

All miners were issued with a metal disk with an engraved number, known as the Lamp Number. Mine was 73. Every miner exchanged his numbered disk for a safety lamp at the start of his shift. The numbered disk remained on its hook until it was exchanged for the lamp at the end of the shift. The disks on the hooks thus represented all the workers who were still underground.

My experience of being trapped in a mine

A miner's disk. Photographed at a show in poor light. Do you have a better photo?

I had one very unpleasant experience. The previous shift hadn't been able to clear all their working, and I was told to go with one other person to load tubs in a new heading. Headings have only one exit. While loading the tubs there was a fall which blocked this exit.

We knew that there was nothing for it but to sit it out and wait to be dug out, but while we were waiting the roof continued creaking. This made us acutely aware of the half mile of rock above us which we feared might not stay in place.

Fortunately we were not short of air and other miners had heard the fall. So we only had to wait a few hours for them to dig us out.