Filing documents before we went digital

Before we went digital, documents had to be kept as paper copies, and in order to locate them quickly, they had to be filed in an organised manner.

Similarly, objects, too, needed to be filed in such a way that they could be found easily.

Filing had to be according to some sort of keyword, not that the term 'keyword' was ever used. Normal terminology was filing 'under' a particular word or set of words. Dates and names were common such keywords.

Often, though, identifying suitable keywords was a hit and miss affair because what the person filing thought would be most suitable were not what the person trying to retrieve assumed would be the keyword. Would you, for example, file documents about mending a tap under 'taps', 'date of mending', surname of plumber, 'bathrooms' etc? You could only choose one of them. (This is why the digital age has databases and spreadsheet software which can assign an item with a number of keywords for easy retrieval purposes.)

Before the digital age, documents fairly frequently got lost, simply because of ambiguous filing. However, filing was time-consuming and boring, and - as explained below - it couldn't be done while sitting in one place. So it was a job which was frequently given to temporary staff who had little interest in the long-term life of their filing as they would shortly move on. Companies cherished long-term secretaries who understood their own filing systems.

Most of the documents that needed filing were of the standard paper size. This paper was 'foolscap' which was slightly longer than A4.

The standard way of filing these documents was in a filing cabinet, rather like the ones in the pictures below. The wooden ones were rather more up-market than the metal ones. 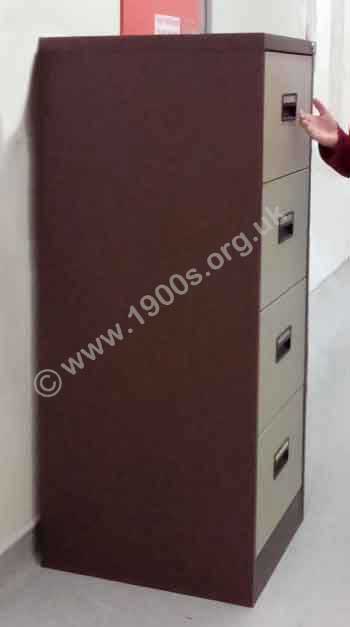 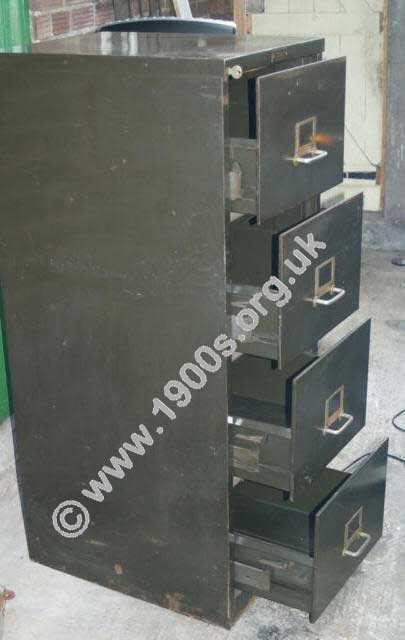 
Most offices had sets of such filing cabinets with rows and columns of drawers as shown in the picture. So you filing meant to-ing and fro-ing from one drawer to another, bending down, and returning to a desk or table where the papers to be filed were spread out. That is why it couldn't be done while sitting at a desk.

The fronts of filing cabinet drawers

On the front of each drawer, by its handle, were slots for removable cards showing the range of items stored in that particular drawer, for example D-F or 53-55. The cards needed to be removable because some drawers got filled more quickly than others so that the contents had to be shifted along. Then new cards needed to be made to show the new contents of the drawer.

Searching inside a filing cabinet drawer 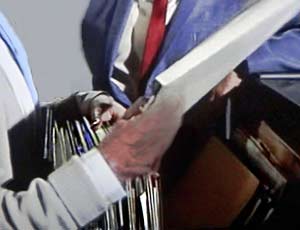 Inside a filing cabinet drawer

Inside each drawer of a filing cabinet were 'slots' of folded cardboard hung from horizontal metal strips.

The strips slid on runners so that any one slot could easily be opened up for viewing or retrieval. The horizontal strips had small holders for strips of paper to show the contents of the slot. Documents with the same keyword were filed together in the same slot, normally with the most recent addition on top. The pictures give the idea.

Cards, known as index cards were used for storing compact information such as contact details of customers or locations of bulky items. 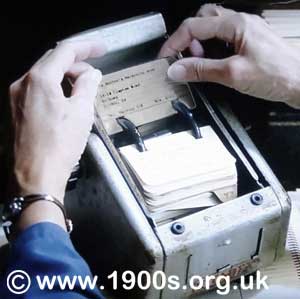 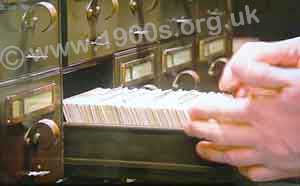 Card index system in use 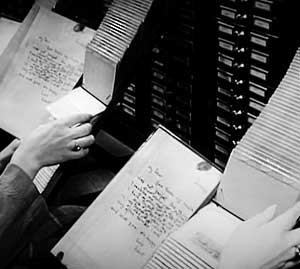 Cabinets for card indexes looked from the outside rather like small versions of the large filing cabinets already described. The drawers were of course smaller to take small index cards and often a single box of just one drawer was all that was required. People often kept a small card index box on their desk.

With very large amounts of material, one really had to know one's way around in order to retrieve something. I shall never forget trying to find a documents in what was then the Public Record Office and is now the National Archives. This was before the stock was computerised.

I was trying to find the seaman's record for one of my ancestors. The process took a very long time because the first index system merely narrowed the search and directed to a second index system, then onto a third and so on. Each index system was located in a different place.

I can't remember the procedure exactly, so my apologies to the National Archives as I have surely got it wrong in detail, but it was something like:

The whole process was time-consuming and frustrating. We must be thankful for computerised records!