How barometers were used in the past to forecast weather

Although I grew up used to hearing weather forecasts on the radio (or the wireless as it was then called), older people around me still used the methods that they knew from before home radios became common. in ordinary families, observations based on weather folklaw were relied on, whereas the wealthier families had barometers. This page is about barometers which was the best tool for household use for forecasting the weather.

Strictly speaking, barometers cannot forecast, ie they cannot see into the future, at least not directly.

A barometer scale goes into some detail, as shown in the following photo which enlarges on tap/click or pinch out: 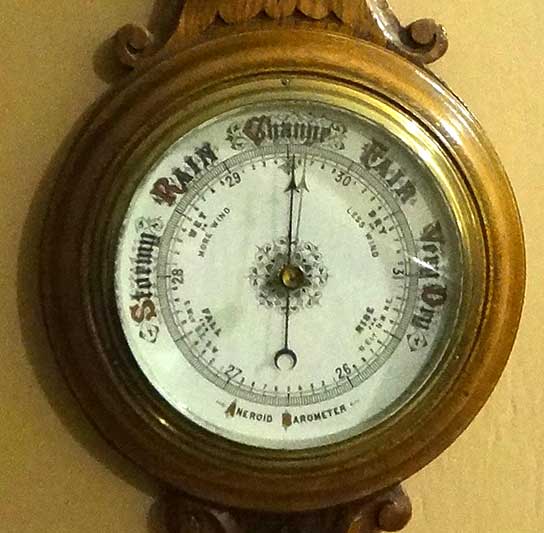 The lowest pressure is marked as stormy. Then with pressure increase, the labelling goes through rain, change and fair to very dry.

How people could use home barometers to forecast the weather

The only way that people could use home barometers to forcast what the weather was going to be like was to note the direction in which the air pressure is changing.

Two types of barometer could be found in homes of years ago - one called an aneroid barometer and an earlier type called the mercury barometer, both considered below. Both have two indicators: one moves to measure air pressure and the other which can be set to line up with it. If the second is moved to line up with the first and then, sometimes later, the two have moved apart, the direction in which the air pressure has changed can easily be seen. How far and how fast suggests that it may continue to move in that direction. In this respect the barometer is forecasting the weather.

But of course the change may not continue in the same direction and its speed can only be estimated. So these barometers were not particularly accurate.

These barometers by themselves did nothing to measure outside temperature or humidity, although they usually had thermometers built in with them to measure temperature separately.

An instrument for measuring humidity, called a hygrometer, did exist, but I never saw any. Hygrometers were based on the extension of a hair in damp weather. I expect you have noticed how lank hair your hair becomes in damp weather.

Both thermometers and hygrometers, like barometers, measure the conditions at any one time. They are aids to forecasting weather but they cannot actually forecast it.

Mercury barometers for forecasting the weather

How the mercury barometer works

It is probably easiest to explain how the mercury barometer works, by asking you to think back to something that you must have done at some time in your life. Surely you must have filled an ordinary drinking glass under water, tipped it up and then lifted it partially out of the water. The glass stays full of water. The water doesn't fall out until the glass is lifted completely out of the water. Even then, a slight resistance can be felt. 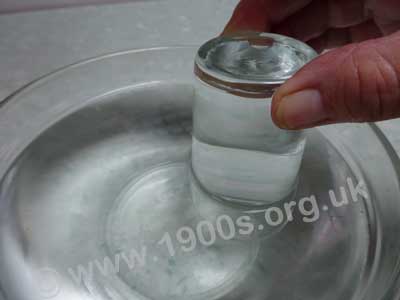 Glass full of water upside down in a bowl of water; the water stays in the glass supported by air pressure

The reason is that the pressure of the air on the surface of the water is keeping the water in the glass.

In fact, only if the glass were made about 10 metres tall, would the weight of the water inside become too great for the force of the air pressure. Then the level of the water would drop, leaving a vacuum above it.

Because air pressure changes with the weather, so the height of the water column would change, and this change could be used to measure air pressure. However a receptacle of water this tall is impractical. A shorter one would work with a much heavier liquid. The answer is a tube of mercury.

Mercury is expensive and contact with it is bad for people. So the glass containing it is made as a very narrow tube and the bowl is made small and covered, apart from a small hole which is open to the air. The arrangement does still require the closed tube to be tall, but at less than a metre, it is just about practical, although unwieldy.

Being so unwieldy mercury barometer was generally used as a display item fixed to an indoor wall and usually housed in a rather elegant polished wood case. A scale behind the top of the tube allowed variations in the height of the mercury column to be measured, so indicating air pressure there at any one time.

Air pressure was measured in millimetres of mercury and standard atmospheric pressure was taken as 760mm of mercury. Today different measurements are used.

A mercury barometer, photographed in Milton Keynes Museum. Its old-style affluence is clear from its decoration and inscriptions on its face.

Detail of a mercury barometer, showing the small mercury reservoir, open to the air through a small space and the bulb associated thermometer for measuring temperature.

Mercury barometers were popular in Victorian times, but as mercury was expensive, they usually only found their way into somewhat affluent homes. I did see a few around, though, when I was growing up in the 1940s.

Mercury barometers are more difficult to read than the later and more common aneroid barometers, but the term, "The mercury is falling (or rising)" only relatively recently went out of common speech to describe changes in the weather.

Like mercury barometers, an aneroid barometer only measures air pressure when and where one looks at it.

Aneroid barometers became relatively common in middle class families during the 1930s. They were cheaper and easier to read than mercury barometers, and although they were often hung on walls for display like mercury barometers, they could also be made small and consequently portable, particularly as they did not contain any liquid. There are photos below.

How the aneroid barometer works

Instead of having a pool of mercury that the atmosphere pushes down on, as is the case for the mercury barometer, aneroid barometers have a flexible, air-tight metal box. When the air pressure rises, it squashes the box slightly and conversely when the air pressure falls, the box flexes slightly outwards. A spring attached to the box moves a pointer over a scale which, like the mercury barometer, is calibrated to indicate bad weather for low pressure and good weather for high pressure. (As air pressure decreases as one goes up a mountain, the calibration can also be for height, so making the device into an altimeter.)

Many aneroid barometers went some way towards mimicking the appearance of the older and more expensive mercury barometers in that they were housed in a tall elegantly carved, polished wood cases. Although the height of these barometers was unnecessary as far as the workings of the barometer was concerned, it was usually used to house a thermometer for measuring air temperature. 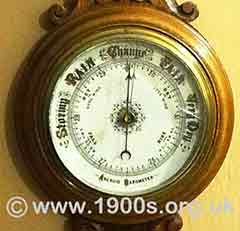 Left: A wall mounted aneroid barometer, photographed in Llanerchaeron House. Note the old-fashioned writing on the dial, although the barometer is likely to be more modern than a mercury barometer.

The pictures show the reference pointer that can be lined up with the moveable one and then stays in this position until it is reset. So when the main pointer, moves, how much it has moved can easily be compared with where it was earlier, corresponding to how much and how quickly the weather is changing.

It seems to have been standard practice to tap the glass before reading the barometer. Apparently this was because the moveable pointer might have stuck and the tapping dislodged it to where it should be.

My mother-in-law's barometer was an aneroid one, and she always seemed to be tapping the glass it to see what the weather was going to be like.

Shelf and desktop aneroid barometers in homes and offices

Aneroid barometers are not limited by size in the way that mercury barometers are. So small versions were used for display on shelves and desks. 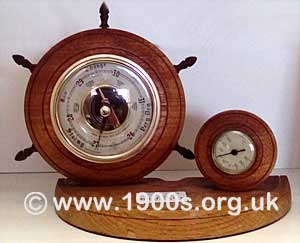 Small aneroid barometer suitable for a shelf or desktop.
Although not clear in this picture here, the original photo shows the thermometer on the right calibrated in degrees Centigrade, whereas degrees Fahrenheit was standard in Britain in most of the 20th century. So probably this particular device is foreign and the thermometer works on a principle based on a bi-metal strip - but that is another story.

Barometers served a useful home weather forecasting purpose up until the 1930s when sophisticated weather forecasts became available on the radio - or wireless as it was then called.

Yet barometers are still seen in homes. They are of historical interest and attractive to display.