Log tables and how they were used for calculating

Essentially tables of logarithms provided a way of multiplying and dividing large numbers by simple addition and subtraction which was much easier than the manual operation of what was called long multiplication and long division. See below for how this worked, but first some background information.

Log tables were introduced into schools in 1908 when a Mr Castle published his log table book. This was well before electronic calculators became available in the early 1960s and also well before the UK went decimal, which meant that many calculations were not as straightforward as they are now. They were with slide rules, mechanical calculating machines and books of log tables.

The log table books, sometimes called logarithmic tables or logarithm books were probably the most common because they were taught in maths classes in schools and were essential for the maths examination known as 'Ordinary Level' or just 'O level*'. Also, as they were somewhat thin booklets, they were relatively cheap and easy to carry around. 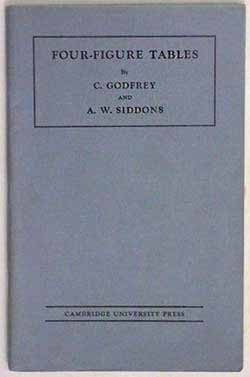 I started using these tables in the 1950s at my grammar school. Those that my school provided at that time were by Godfrey and Siddons, and published by Cambridge University Press. If you are old enough, you will recognise the photo of the front cover.

The Godfrey and Siddons books of tables provided answers accurate to four figures and accordingly had the title of Four Figure Tables. However, similar tables did exist to more than four figures although I never saw any of them at the time. Also there were other authors and publishers.

As our main use of these tables was for looking up logarithms** as a means of multiplying and dividing - see below - they acquired the name of Log Tables or just Logs, even though they did contain other types of mathematical tables.

All that matters for understanding what life was like for ordinary school children in the mid 20th century is that two or more numbers can be multiplied together by adding their logs and decoding the result. Similarly a number can be divided by a second number by subtracting the log of the second number from the log of the first number and decoding the result. The decoding is achieved by looking up what is known as its antilogarithm or antilog from another page in the book of tables.

The process can be understood visually by seeing how a slide rule works and you may like to refer to the slide rule page before reading on. Slide rules have log scales printed on them.

The image shows the row and column structure of a typical page of log tables. The image is intentionally too small for the individual numbers to be legible, because the purpose here is only to show the 'shape' or structure of a page. This is important for understanding how a table was used.

Row and column structure of a page of logarithms in a book of Four Figure Tables.

If the numbers to be multiplied have four significant figures, the wide columns at the far right come into play. Keeping to the same row, these give the number that has to be added to the three-figure's log.

A ruler is essential to prevent wandering off one row and onto another, but the layout does make this more manageable with a space between every third row.

Decimal points and powers of ten

Like slide rules, logs do not show where to place a decimal point in an answer or if any zeros are necessary. To find this out, a rough calculation is necessary as explained on the slide rule page.

The pros and cons of using logarithms for multiplication and division

This use of logarithms may seem longwinded by today's standards where electronic calculators are so widely available, but you need to realise that the additions and subtractions involved were not particularly arduous for us. Because there were no electronic calculators most people became rather adept at what was called 'mental arithmetic' and it was taught as a school subject to young children. My father, for example, who worked with figures all his life, could glance so rapidly down a column of complex numbers, that it looked as if he was simply checking that they were legible. Then he could immediately announce what they added up to.

So to us, before most of us knew anything about electronic calculators, logarithms were all advantages with no disadvantages. There was nothing that we knew of that could possibly make multiplication and division of large numbers any easier. We were of course taught how to multiply and divide large numbers using only pen and paper and what were known as 'long multiplication' and 'long division', but these methods were unwieldy and open to far more errors than looking up numbers in tables and simply adding, subtracting and decoding.

* The General Certificate of Education Ordinary Level exam (also known as the GCE O Level) was the precursor of GCSEs and introduced in Britain in the 1950s.

** Every number has what is known as a logarithm or log to a particular base (normally taken as 10) which is unique for that number. How a logarithm is calculated is not something which anyone without a specialist interest could be expected to understand.