Financial calculations with British money were not straightforward before the country went decimal. This was because the financial system was not based on tens. There were twelve pennies to a shilling and twenty shillings to a pound. 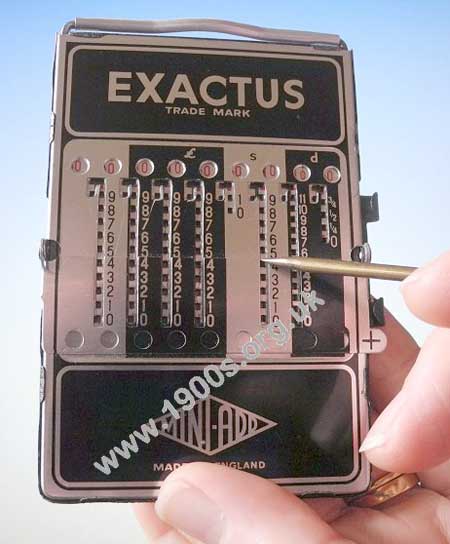 Even though we were used to making these calculations, financial calculators were a blessing. In the 1950s when I was growing up, we were even allowed to use them at school, although not in exams. At this time, of course, they were mechanical rather than digital.

I was lucky enough to have a financial calculator that worked for pounds, shillings and pence (£ s d) - see the photo. Its trade name was Exactus. The far-left black columns were for pounds, the central silver ones for shillings and the far-right black ones for pence. There were even holes for a farthing (¼d); a ha'penny (¼d) and three farthings (¾d).

The Exactus was operated with a metal stylus which, when not in use, clipped onto the side of the calculator. This stylus was used to select numbers in any or all of the columns of pounds, shillings, pence, ha'pennies and farthings. Once the stylus was inserted into a number, you slid it down to the bottom and the amount selected would appear in the little round windows at the top.

You could add another amount by sliding down another set of numbers in the same way. When a total came to more than 12 pence (which would make a shilling) or more than 20 shillings (which would make a pound) the sliders would show red and you had to slide them up and over the top hook. As many amounts as you wanted could be added together this way.

Subtraction on the Exactus was done by flipping the number cover up on a hinge which very cleverly had the negative numbers on the other side so that you could do the same operations to deduct a sum. So, for example, starting with, say, £12 6s 4d (twelve pounds six shillings and four pence) and subtracting £3 2s 6d (three pounds two shillings and six pence) would show a final total of £9 3s 10d (nine pounds three shillings and ten pence).

Some makes had the minus sliders on the back connected inside to the front ones.

Unfortunately there was no direct way to do multiplication with the Exactus. So, if, for example, you wanted to buy 25 of something that cost 3 2s 6d, you couldn't just multiply by 25 to find the total cost. You would have to add together 25 lots of £3 2s 6d, which was really a non-starter for large quantities.

Neither did the Exactus do division. So, if for example, 75 items cost £23 10s 9d and you wanted to find the cost of just one, it wasn't possible to divide £23 10s 9d by 75. You had to rely on the long division that you learnt at school!

Page contributed by Laurie Prior