Slide rules and how they were used for calculating

The slide rule was a device widely used for making calculations quickly and easily before the development of the electronic calculator. This page describes it basic structure, how it can be used for multiplication and division and its accuracy. It also comments on other functions and variations in structure.

Structure of a basic slide rule

The photo shows a fairly basic slide rule which is the one that I used regularly in the 1960s and 1970s. It was nominally 12 inches long, about 25 cm.

My slide rule and most others at the time were made of plastic, but I understand that slide rules made of bone or ivory existed before plastics were developed.

Slide rules made with plastic and wood

My slide rule in 1952 was wood with a plastic laminated scale surface. I believe that the wood was more dimensionally stable to prevent the slide sticking due to distortion.

As can be seen from the above photo, these slide rules consist of a wide ruler, a narrower one which slides along the central groove of the larger one and a cursor.

The cursor is spring-loaded so that, although it is easy to move, it stays in position afterwards. By sliding the narrow ruler to a suitable position, and reading off from one of the other scales, all sorts of complex calculations can be made quickly and easily - more of which below. The cursor increases accuracy by enabling markings on the two scales to be lined up more precisely.

Slide rules also came - and presumably still come - in different lengths and in circular shapes, but they all have a cursor and work the same way. Circular slide rules are all plastic but very thin. 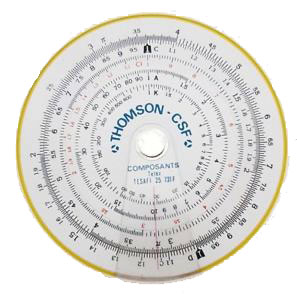 You can skip this section if you like and just go on to the next section on using a slide rule.

Every number has its own unique logarithm, usually just called its log.

Logs are useful because they avoid long multiplication and division of large numbers. The logs of numbers to be multiplied merely have to be added together and the resulting log 'reversed' or anti-logged for the result. Similarly, for division, the logs of the two numbers merely need to be subtracted and anti-logged.

Logs and anti-logs of numbers can be looked up in log tables, but users of slide rules don't have to waste time doing this because the logs of numbers and their logs are already marked on slide rules. Adding and subtracting of the logs are done merely by sliding the scales against each other.

You can see how much quicker this is than consulting the log tables and adding or subtracting them, bearing in mind that when slide rules were popular, there were no electronic calculators.

You will notice from the pictures that log scales are not linear, i.e. they are scrunched up at one end.

How to multiply with a slide rule

Suppose you want to multiply 2 by 3. Yes, that's so simple that you know the answer anyway, but this is to show the principle.

Slide rule with its cursor over the first number to be multiplied on the top scale with the sliding scale, slid along so that its 1 is in the same position.

Move the sliding scale (green in the photograph) until its 1 is lined up with the first number to be multiplied on the top scale, in this case 2, as in the above picture.

Then look along the sliding scale to the 3 and move the cursor precisely over it to read off the number it is aligned with on the lower fixed scale. You can clearly see that the 3 is lined up with the 6. So 3 × 2 = 6

Slide rule with its the sliding scale in the same position but with its cursor slid along to be over the second number to be multiplied so that it also shows the result of the multiplication.

By sliding the cursor to various other positions, you can also readily see that other values of 2 times any number can also be read off, for example 2 x 2 = 4 and 2 x 4 = 8 etc.

Using the cursor to mark intermediate positions enables several numbers to be multiplied together in one go.

Where the numbers contain decimals, for example if 3.59 is to be multiplied by 4.62, the cursor becomes more important for accurate reading.

Decimal points and powers of ten

Slide rules cannot put in powers of ten or a decimal point. So you need to do a rough answer in your head to see what these should be. For example a multiplication like:

Needs to be treated as:

This comes to 63 X 107 which is better expressed as

So when the slide rule gives the result as 6.79 you know that the actual result must be

Division with a slide rule

Division is the reverse of multiplication in that the cursor is placed over the number to be divided and the number that is to divide it is slid along so that the two are lined up. Then the answer is read of from the position of the 1 (or the 10 if the 1 is off the scale).

It will not have escaped your notice that there are other scales on the slide rule. These encompass sines, cosines and more advanced functions.

Three significant figures are all that are normally quoted for accuracy with a standard slide rule, but that depends on its length how well it is made.

I was in the first year that slide rules were allowed in O level exams, and although my maths teacher decried their use as being less accurate than the standard 4 figure log tables, I delighted in getting results that were just as accurate with the six inch slide rule my father bought me. It helped that I was myopic as I could interpolate the small scale quite well and the rule itself was accurate.

I once bought a circular slide rule, but it turned out to have the scale slightly off centre and was very poor even though in theory it should have been accurate to about 6 figures.