Nappy fabric in the past

Traditionally nappies were made of the most readily available cheap, absorbent, soft, flexible and durable material - cotton towelling, also known as terry towelling or just towelling. No-one ever called it just 'cloth', which I understand to be an all-encompassing term when applied to nappies and meaning cotton, bamboo, hemp or microfibre.

Towelling could be bought relatively cheaply by the yard from a roll. So almost all nappies were made by cutting the towelling or old towels into squares about 2 feet by 2 feet (about half a metre by half a metre) and hemming the edges. This was often a task taken on by a grandmother who was used to using such nappies with her own babies. 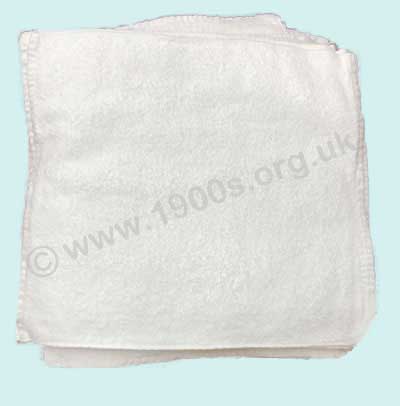 For the more affluent, the newly opened Mothercare shops proved irresistible as they sold all sorts of baby equipment including ready-made squares of towelling nappies.

Disposable nappies had not yet arrived in the shops when I had my babies in the 1960s.

How towelling nappies were put onto babies

The square nappies were put on by first folding the square crossways to make a triangle. This was done on a table or other flat surface. For very young babies who needed a smaller nappy, the triangle was folded in half again making a smaller triangle of double thickness. 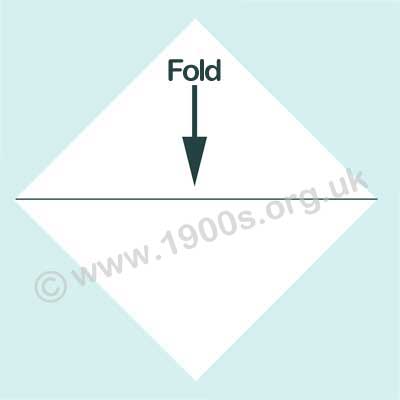 The first fold of a terry towel nappy.

The washed and powdered baby was then laid face up onto the triangle such that the long edge of the nappy was under her tummy - let's say she was a baby girl for ease of reading, but the principle was the same for boys. This left three mini-triangles poking out: one at each side and the other between her legs. 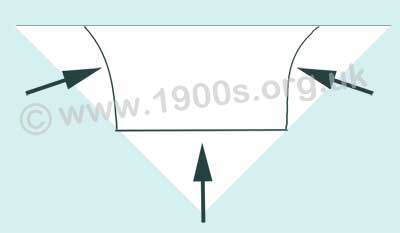 The final three folds of a terry towel nappy

These were drawn round the baby to overlap each other and pinned together. Job done. You can see the idea from my mockup drawing. Note that we only used one safety pin, pinned centrally, whereas the modern disposable equivalents use two sticky tapes, one for each side. With the towelling nappies one size really did fit all because it could be pinned more loosely as the baby grew. 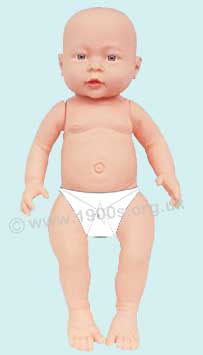 Schematic of the finished folded nappy

The pin was a specially shaped nappy safety pin that was large and clicked shut once it had been closed. I never knew of it coming open or piercing the baby. 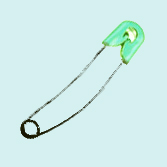 Metal nappy safety pin to secure the folds in front

There were two further refinements. One was plastic pants with elasticated waists and legs - bought from Mothercare - to stop leakage, and the other was a muslin liner to aid washing - see below. These were modern innovations at the time - things that my parents and grandparents never had. 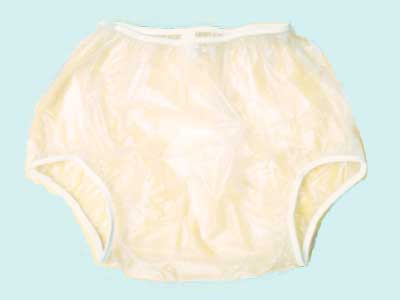 Before plastics became common in the 1950s, rubber pants were sometimes used, but as often as not, babies were simply laid on a rubber sheet or even placed where leakages could do least harm. My mother told the story of how she was told to hold her baby sister in the early 1900s and the baby wetted her, presumably because there was no waterproof protection.

How towelling nappies were washed

Soiled nappies were cleaned by first holding one corner under a toilet flush to remove the solid matter. It was essential to keep tightly hold of the corner while doing this. I had one bad experience with my first baby in the mid-1960s: the force of the water was so great that it tore the nappy out of my hand, never to be seen again. It took a while for the drain to clear. Soiled nappies often kept their stain, even after washing, so some women told me that they lined the nappies with muslin which helped to keep the nappies' colour.

After removing the soil, each wet nappy was placed in a dedicated bucket filled with water. Those I knew in the 1960s came from Mothercare and were made of white plastic with a colourful transfer on the side and the lid. Before Mothercare, I suppose a metal bucket or an enamel bowl would have been used.

My friends who had babies about the same time as me tell me that they soaked the nappies in Milton sterilising fluid and then washed them - in twin tub washing machines of course.

I was guided by my mother: Nappies had to be boiled in a large saucepan on the hob using soap flakes, never with detergent which would have chaffed a baby's sensitive skin. Soap flakes had been available for many years, so I am sure that my mother treated her nappies this way in the late 1930s, and that our grandmothers and great grandmothers probably also boiled their nappies with soap flakes in the copper. Before the middle of the 20th century there were no detergents, so soap would have been the only option anyway. Whether it had to be the hard household soap, I don't know. I do know that nappy rash was not uncommon, even in the 1960s, and various creams were sold for it. By then of course detergents were available.


Soap flakes and scum before detergents

The soap used for boiling was 'Sylvan flakes', diamond shaped transparent slivers of soap which dissolved easily. Where I lived, the water was soft so lathering was no problem.

In hard water areas lather would happen only after the dissolved calcium and magnesium salts in the tap water had reacted with the soap. This reaction caused scum which was difficult to rinse out.

The nappies needed to be rinsed well and wrung out thoroughly in order to keep them soft. One woman told me that she left them hanging in the rain to soften, but rain does not come to order, and nappy washing and drying had to be on-going.

Nappies often had to be dried indoors which wasn't always easy with no central heating radiators. So we needed a good supply of nappies.

A new innovation in the 1960s was the nappy laundry, but I never knew anyone who used it. Among the women I knew, it was seen as extravagant. Of course they would also have considered today's disposable nappies as extravagant, if they had known about them - and nowadays they seem to be the norm.