Experiences of polio/infantile paralysis before the 1950s vaccine

Certain childhood illnesses were common when I was growing up in the 1940s. Those that spring to mind are measles, whooping cough, mumps, chicken pox and rubella (known to us as German measles). Children caught them, were ill for a while, invariably recovered and accordingly developed immunity. No vaccines were available for them, and I had them all, as did all the other children I knew.

There was, though, one childhood disease that was rife in my childhood and which I am extremely grateful that I didn't get. Its official name was polio.

Vaccinations in the 1940s

As an aside from polio, I ought to point out that we did have vaccinations, but only for diphtheria and smallpox.

I must have been too young to remember the diphtheria vaccination but it was obvious who had had it because it was delivered by scratching a circular patch on the arm, and everyone around my age still has the scar.

I must have been about five for the smallpox vaccination because I remember asking the doctor how it worked and he said it was the much weaker cowpox which still gave the same immunity. Apparently it had been noticed that milkmaids never caught smallpox because the relatively inconsequential cowpox that they caught from cows gave them an immunity.

Polio was a dreadful and greatly feared virus disease which could paralyse muscles, preventing or retarding their growth and function, often stunting limbs for life. It could also kill. It struck indiscriminately in the summer months and mainly targeted children. It was therefore generally known as infantile paralysis. I only learnt much later that its official name was polio.

No one knew where polio came from or how it was caught, although public swimming baths were widely feared by parents without, as far as I know, any supporting evidence.

There was no cure.

When I started school at the age of five, I was struck by a little girl in my class who pulled around a heavy metal contraption on one leg. This was called a calliper. She had apparently had polio as a toddler and needed the calliper to stretch her leg so that it would lengthen to match the other leg as she grew. 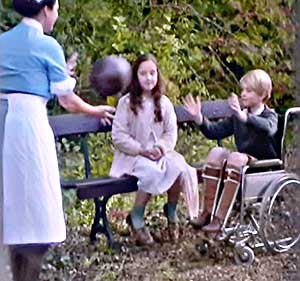 A boy recovering from polio with callipers on his legs.

Callipers are seldom seen these days as polio is thankfully a disease of the past in what is known as the developed world. The best way to describe them is through the photo of the boy in the wheelchair wearing callipers on both legs. When he stood up, he would probably have needed crutches.

My father-in-law had polio as a child sometime around 1915. I wish I had asked him about it, but I didn't. How often has that been said of relatives no longer with us! What I did know was that the polio had left him with one leg shorter and thinner than the other which made him walk with a limp. At least he wasn't paralysed as he easily could have been.

Callipers must have been childhood treatments, as I never saw an adult wearing one, presumably because they were no longer growing.

My little classmate with the calliper on her leg also had a shrivelled arm which she couldn't use because its muscles no longer worked. I never saw callipers on arms. I remember being put next to her in a game that involved forming a circle of linked hands. As she couldn't move her arm, I had to take the initiative of taking hold of her hand which felt small, lifeless and cold in mine. It was an uneasy experience for a child so young, although of course it was far worse for her. I feel strongly that if only her disability had been explained to us and we had been told how we could help, her life would have been much pleasanter. Even at the age of five, we would have been old enough to understand and help, but we were left with only gossip to find out what was the matter with her.

Polio was life-threatening when it affected the lungs because the paralysis prevented normal breathing. There was a treatment but it was not quick and was seriously unpleasant.

The treatment was to place the child - it usually seemed to be a child - inside a large metal tube-like container with a pump which pumped air in and out. This was called an iron lung because the changes in pressure effectively breathed for the child. 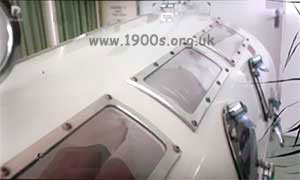 View along an iron lung showing its viewing portholes 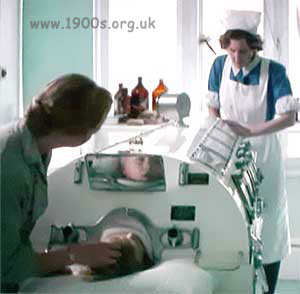 
I can hardly imagine how awful being in an iron lung must have been. Patients had to lie there on their backs for days or even weeks at a time with only their heads exposed, and the pump was noisy. I understand that patients were slid briefly out of the iron lung for attention to their bodily functions, either at regular intervals or when the need could be seen through the portholes.

The iron lung was, I suppose, a forerunner of the ventilator which is the last defence in the coronavirus pandemic. Iron lungs, though were before the digital age, so with fewer refinements. If there was a power cut - commonplace during and after the war - the iron lung had to be pumped by hand.

The iron lung treatment often provided a respite while the lungs healed themselves. Then patients could come out of the iron lung, but otherwise they usually died. There are, though, reports of people needing the support of an iron lung as adults.

My experience of having polio

One day, my mother brought me home from school whereupon walking into our front room, I collapsed on the settee completely lifeless. She immediately called in our doctor who diagnosed me as having a chill in my stomach and that I would be as right as rain next morning.

Not satisfied, my mother asked the lady next door to have a look at me. She and her husband were medically qualified and owned a chemist shop. They both agreed that I was very ill and called in their own doctor. Within five minutes of him seeing me, my mother and I were in his own car being rushed to Guys Hospital.

Guys Hospital had only two iron lungs at that time and both were in use. In one was a little girl and in the other was a little school friend of mine who had been admitted the previous day. So I was left on a trolley next to his iron lung so that we could see each other. Possibly significantly, he and I had both recently swam together at the Whips Cross Lido at Walthamstow.

All this took place in August 1939 and within a few days on the 3rd of September, World War Two began. Then the London hospitals became the German Luftwaffe targets because Hitler thought they would contain our injured soldiers. So the children's isolation ward at Guys was evacuated to a hospital up in the hills above Brighton where I have many more vivid memories, such as my bed being wheeled out onto a balcony so that I could see across the sea. BUT, alas I wasn't to see very much of my London-based mother for a while.

I had spent two months in Guys Hospital with polio and further two months convalescent in the Brighton Hospital before being allowed home. I didn't see my little school friend again for years. The polio had paralysed him from the waist downward. There was of course no treatment.

It was my Dad who did so much to aid my own recovery. He made me do as much sport as possible, and apart from being left with very thin legs, I have made a full recovery. All thanks to my Dad. God Bless Him.

A vaccine at last!

Thankfully a vaccine against polio became available for the public in the mid-1950s. It was served as a few drops on a suger cube. I had mine, along with other undergraduates at my university. We were called in large groups to stand in a long line and a nurse moved along the line, serving each of us in turn. It was all rather amusing at the time with giggles all round. Only in later life did I realise how grateful I should have been for it.