The Government was good to children in World War Two in spite of the severity of rationing. Children had their own ration books which were more generous than those of adults. Pre-school children had allowances of cod-liver oil and orange juice. My mother had to collect mine from the local clinic. 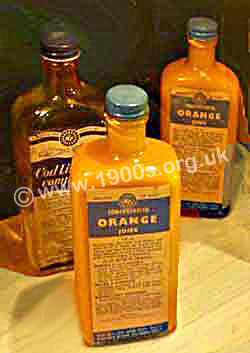 The orange juice tasted wonderful but the cod-liver oil was absolutely disgusting. I wouldn't have any of it; so my mother, with the ignorance of her background, just gave me extra orange juice 'to make up'.

Clearly the refusal to take cod-liver oil was widespread, as it soon became available as 'cod liver oil and malt', a totally acceptable brown sticky substance that tasted like toffee and had to be spooned out of a large jar.

Once at school, there was free milk.

My first years at school were before the National Health Service, but there was a free school clinic. Ours was in Mill Hill, the next town from where my family lived in Edgware. The school dental surgery was also there which was the only reason I ever went there, although I understand that it also handled simple broken bones, sprains, general childhood ills and minor operations. Anything more serious was referred to a hospital.

We didn't have to go to the clinic for general health checks because the nurses came to the school. These checks were mainly to look at children's throats, feel their glands and check their heads for lice.

The doctor and the doctor's surgery

I well remember my mother taking me to the doctor's surgery clutching her half crown in payment. Remember, this was before the National Health Service. The half crown was equivalent to twelve and a half pence in today's money, but it was worth a lot then. (As a benchmark, my father bought our house in Edgware on a mortgage in 1938 for £835.)

It always seemed to me to be a waste of time going to the doctor. He always seemed to take the money and give the advice to come back in so many days if things were no better. I suppose other people must have fared differently.

There were no antibiotics available to the general public, and when I had measles my ears were extremely inflamed - but there was nothing the doctor could do. My mother always said that my hearing loss in later life stemmed from that time. Apparently, though, my mother did once take comfort from the doctor's words, "These things come Mrs Clarke, and, thank God, they go". In most cases, he was right.