For as long back as I remember and for many years afterwards, broken bones were held in position by what looked like a thick layer of plaster. (Fibreglass casts were decades away.)

In fact, the casts were made from strips of gauze coated with what was known as Plaster of Paris. After the broken bone was set into its correct position, these strips were wetted to make them soft and rolled round the patient's limb over some sort of padding. The cast set in about ten minutes. 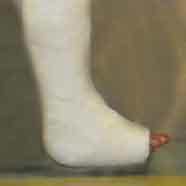 Plaster cast
on a foot 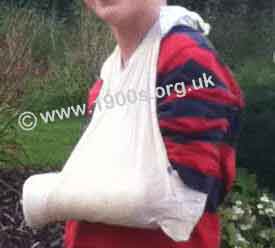 Plaster cast on an arm


What made the plaster casts so very different from the later fibreglass ones was their bulkiness and weight. The bulkiness meant that they couldn't easily be hidden by clothes. So it was quite normal to see people around with a plaster cast.

As the casts were opaque white, it was standard practice for friends to autograph them. So the casts became, as often as not, almost black and blue with signatures, drawings and messages.

Once a cast was removed, the limb concerned felt very fragile because it had spent the last six weeks or so used to the weight of the cast's protection.

Crutches were very different too. To take weight off the injured part of the body, crutches had thick leather-filled padding which went under the arms to take the body weight. When people used them, their shoulders were forced upwards, making them look much less elegant than users of modern crutches.

These old crutches were of course made of wood, with wooden bars as handgrips - see the photos. 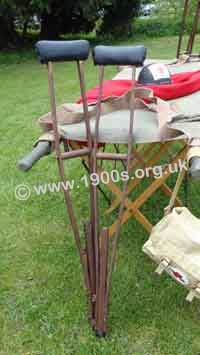 The end of armpit crutches in the UK

The NHS has discontinued and in fact banned these armpit crutches in favour of elbow crutches, as shoulder crutches cause considerable shoulder and neck problems.

I went into Bushey Teaching Hospital in Windmill Lane in 1954 to have my tonsils out. I was just 7 years old. For all the seven days I was in there, my parents were not allowed to visit me - how cruel that was! The hospital had this rule because children used to get upset each time visiting hours were ended. So they banned visiting.

I was anaesthetised by a pad soaked in ether. That's how primitive it was!

Before and after the arrival of antibiotics

My mother told the story of a friend's child going to the doctor sometime in the early 1950s with an abscess on her leg. He prescribed some tablets, which shocked my mother's friends as she had expected an ointment. "It's my leg, doctor, not my stomach", she said, but he reassured her that his prescription was correct.

This was her first introduction to the newly developed antibiotics. They did in fact cure the abscess.

In 1945 I was one of many children who gathered up seaweed from the bay near where we lived. It was collected in large baskets baskets which were picked up by an R.A.F. truck. My understanding was that the type of fine seaweed we harvested was used to grow penicillin which at that time was a wonder drug and used, among other things, to treat servicemen with burns.