Free school milk was the result of several acts of parliament to ensure that children from poor families and, more generally, children growing up with the rationng and shortages of World War Two should be adequately nourished. Not that I knew anything of this at the time. So this page starts with my own experiences of receiving free school milk as a child in my primary school in the 1940s.

How schools distributed the free school milk in the early 1940s

The management of the milk at my school in the early 1940s left much to be desired.

Just before we went out to play for the morning break, we had to queue up at a table of thick, basic china beakers. It was the caretaker's job to set these out and to wash them afterwards.

What I particularly remember was that it was her job to wash them up afterwards for use the next day and that they always stunk of sour milk. We were supposed to pick up a beaker and take it to her for her to pour milk into it. I always tried to find one that didn't smell - but so did all the children. The caretaker would see the children smelling the mugs, get very cross and demand that we shouldn't be so fussy.

The caretaker's name was Mrs Milner, and she lived in what looked to me as a very nice house at the back of the Reception classroom. I suppose there must have been a Mr Milner although I don't remember him. Mrs Milner, like most women of her age, was large, as if she had had many children, and she was always sour and bad tempered. Maybe she had good reason to be: it was wartime and who knows who she had lost in her family.

As far as I know, we never came to any harm from the stale milk deposits.

Later - school milk in third of a pint bottles

Much later, the milk arrived in crates of small third of a pint glass bottles and the children drank directly from them using waxed paper drinking straws. The straws were made of strips of paper wound round into a length of about 9 or 10 inches and sealed with wax. They were much cleaner and pleasanter to use than those smelly beakers. 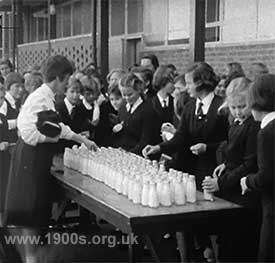 School milk being served in third of a pint bottles.
The children show more enthusiasm than we did when milk was served in smelly beakers.

The disadvantage of waxed straws

You had to be careful not to chew on the straws or leave them in your bottle of milk, as thet easily unravelled and collapsed.

J Eric Nolan
quoted in a letter to The Daily Telegraph

I suppose that Mrs Milner must have had the task of rinsing out the bottles for collection and throwing away the straws and bottle tops, but that wasn't our concern.

These third of a pint milk bottles were never available in shops.

Foil bottle tops were the most widespread for all milk, not only school milk and were for glass bottles. They crimped round their edges as a lid for the milk. 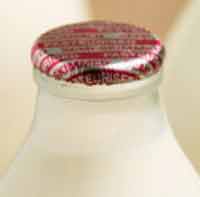 As far as I remember, we opened them by pressing down on them with our thumbs. This raised the edges up from the glass, so loosening the top. However schools in other areas used methods.

Our foil caps in Glasgow were thin and had a tab to enable easy removal, although I suppose you could remove only a portion of the foil to permit pouring but still have some protection.

Incidentally some milks were sterilize. This was to protect from tuberculosis from infected herds. You could safely buy unsterilized milk from Tuberculin tested cows. Our local dairy had different coloured foil tops for different types of milk.

Denter tools were a hygienic alternative to thumbs pushing down on foil milk bottle tops to loosen them. They were supplied by dairies. There were at least two different types, as shown in the following pictures. 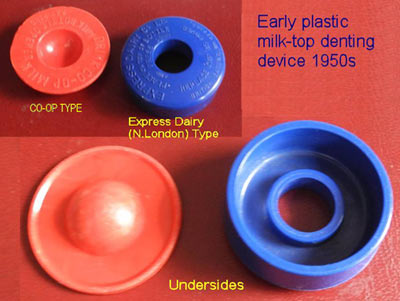 Above: The Co-op type of the denter too and the Express Dairy type

Below: The deter tools in action 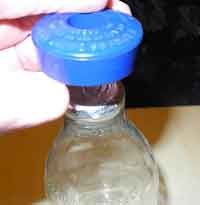 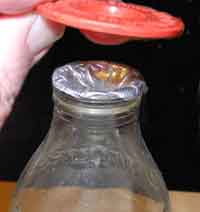 Some dairies closed the tops of school milk bottles with waxed cardboard disks.

The discs had a hole half punched into them so that a straw could easily be poked through. 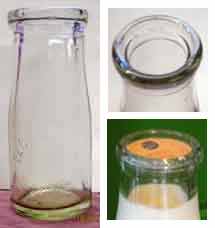 Two views of a 1/3 pint school milk bottle of the sort that had waxed cardboard tops, and a mock-up of the top in place. Photographed at a Watercress Line event.

Our school milk arrived in crates. One pupil in the class was given task of 'milk monitor' and halfway through the lesson he or she would use the denter as described above and squidge all the tops in the two crates. This provided a total of 50 bottles of open milk.

A straw would be popped into each bottle by another 'helper' (rather unhygienic back in those days) but at least the denter avoided having the risk of over-zealous pupils stuffing their thumbs into the milk causing a milk fountain all over clothing and the crate. The denter worked well and very quickly and was supplied by the dairy.

In freezing weather our milk crates often arrived frozen. So they were kept by a radiator in our classroom to warm up.

How used milk bottle tops were put to good use

Schools collected their used foil milk bottle tops for charity. The favoured charity seemed to be Guide Dogs for the Blind. Children collected from friends and family to augment schools' collections and I remember seeing them hauling full plastic carrier bags. My daughter did this as late as the 1970s, although of course at this time the milk was not free for children.

Our teacher used to save the milk top discs, wash them, then with two held together we used to get a needle and salvaged wool from a big sack, then thread the wool through the hole and round the outer edge and back through the centre till the hole was full with lots of different colours. The teacher would then cut the wool all round the outer edge with the scissors between the two discs, then wind a strong thread between the discs creating a woolly ball. These were then threaded on a long string and hung across the front of a baby's pram hood as a distraction toy.

The end of free school milk

In 1968 Edward Short, the Labour Secretary of State for Education and Science, withdrew free milk from secondary schools. His successor, Conservative Margaret Thatcher withdrew free school milk from children over seven in 1971. She is still denounced as a 'milk snatcher'. I am uncertain of the position now for the youngest and poorest of school children.