In the past, May Day, the 1st May, was widely celebrated as the start of good summer weather with dancing round a may pole and crowning a May Queen. This page describes my experiences in the 1940s and goes on to describe my mother's in Victorian and Edwardian times.

In spite of the austerity of wartime Britain and the years immediately afterwards, my school in the 1940s managed to celebrate in the traditional manner.

Dancing round the maypole

At my school, we had a maypole in the playground and we danced round it intertwining its ribbons just as my mother described in Edwardian times. Dancing round the maypole, mid 1940s

Each maypole dancer held the end of a ribbon. Then they danced round, weaving in and out of one another, which made a pattern of coloured ribbons down the pole. Different dances produced different patterns, and the dancers had to move closer and closer to the pole the more they danced because their ribbons became shorter. When the teacher thought that the ribbons were becoming too short, the children had to dance the other way to unwind the ribbons. Sometimes this was to music. 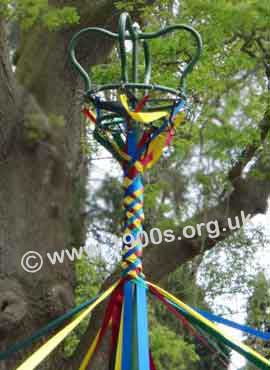 Weave at the top of a maypole. Photographed at Tilney War/Peace festival. My school's maypole had a less elaborate wooden top.

Probably our maypole was an old one, so no significant costs could possibly have been involved in putting on the celebrations.

The May Queen and her ladies in waiting

We also had a May Queen and her ladies in waiting. These were older girls who wore fancy white dresses and had flowers in their hair. The May Queen also wore a white dress. No doubt these dresses owed much to the sewing ingenuity of the girls' mothers, as clothing coupons would not have been spared for them.

During the celebrations, the May Queen was formally crowned by one of her ladies in waiting. 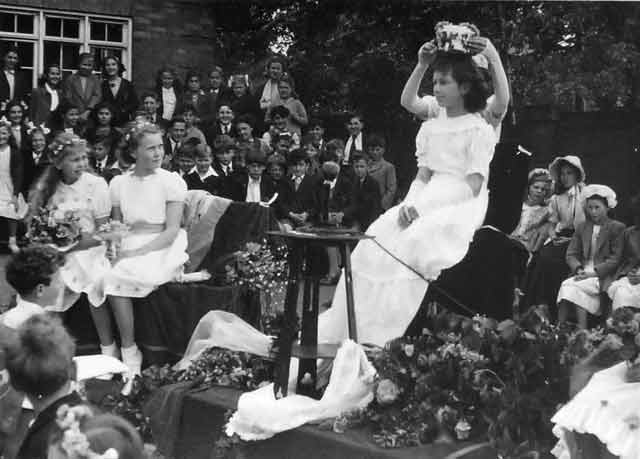 The crowning of the May Queen, mid-20th century. The May Queen's name was Helen Kingston and her attendant on the far left was Brenda Mialls.

My experience as school May Queen

I well remember being May Queen at Edgware Primary School. It would have been in my last year there - 1952.

Sometime before the day, about six girls from my year were paraded around the classes, and the children in these classes voted for who they wanted to be May Queen. How the original group were chosen escapes me, or perhaps I never knew. I think the girls who came second and third were the Attendants. I was still hobbling around with one leg in plaster (after breaking my foot) so goodness knows how I won - sympathy vote perhaps!

The order of ceremonies

The event started with a procession around the playground with all the children lining the route! Then the May Queen and her attendants went up on to a raised "stage" where the Queen was crowned by the Queen from the previous year. Sally Porte was one of my attendants, but I don't remember who else. Miss Sturdy was the organiser.

After the crowning, I had to make a speech. Then there was dancing round the maypole, with various classes taking part.

Parents were allowed to come. So there was much applause for all those taking part.


May Day in Victorian and Edwardian times

My mother wrote was May Day was like in her childhood. In fact it was almost identical to what I describe above, but my experience was in the austerity of the post-war years, so hers was more lavish.

Earlier experiences of May Day

A pleasant memory from my childhood in the early 1900s was May Day, the 1st of May. It was regarded as the beginning of good weather and it was widely celebrated. 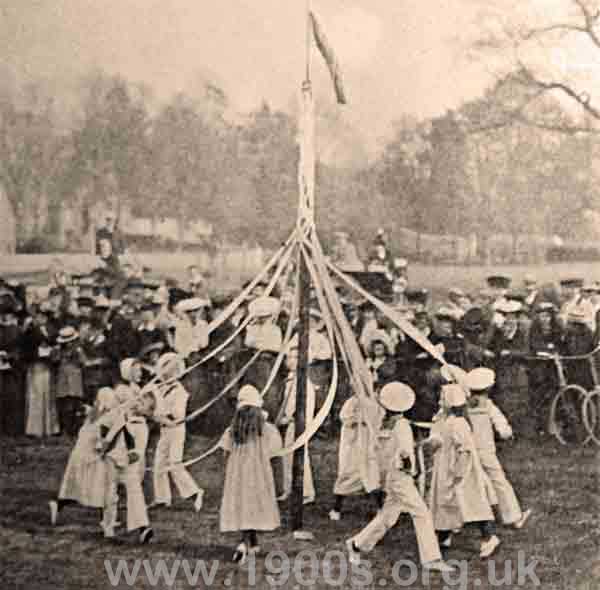 School children were the maypole dancers, although I suppose that there may have been festive maypole dancing elsewhere with adults.

I loved to see it, but I never took part. My brother Jim did, and my mother made him a smock for the event, as worn by the old country yokels.

To add to the festive atmosphere, the horses in the streets often had nosegays of flowers platted into their harnesses. (Also, quite generally in the summertime, horses would wear little straw ear covers. I suppose to keep off the flies.)