Women's stockings before and until the arrival of nylon

As a child growing up in wartime Britain, the first I knew of nylon stockings was no more than hearsay. I never saw any until the late 1940s or early 1950s.

Nylon stockings were known as 'nylons' and, like all stockings, came in pairs, as tights were unknown. They, like all the older stockings before them, were held up with suspenders attached to corsets - or later roll-ons (rollons) or suspender belts. 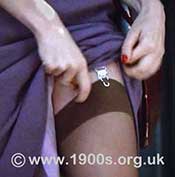 Suspender to hold up stockings. There would have been one at the back too.

Nylons carried a sheen and were said to make women's legs look very beautiful indeed - which was probably what all the fuss was about.

Before nylons hit the fashion scene, well-off young women wore silk stockings which were expensive, However during the war years and the austerity afterwards, silk stockings were impossible to buy.

While nylon and silk stockings were unavailable, most young women simply painted their legs with cold tea or a commercially available liquid called Silktona. In order better to mimic stockings which were always made in one flat piece with the edges sewn together, the women painted a line on the backs of their legs to mimic a seam. I don't know what they used for this. I read somewhere that it was eyebrow pencil, but I doubt if that was available. Do you know? 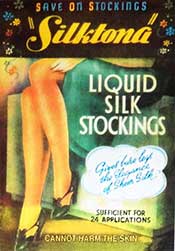 Old Silktona poster, photographed in Amberley Museum. Silktona was used to paint women's legs to make them appear to be wearing silk stockings.

Early nylon stockings didn't stretch. So they came in a range of sizes, shaped to the leg, and described as 'fully fashioned'. 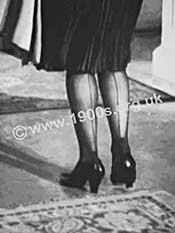 Fashion dictated that the seam of fully fashioned nylons had to be worn precisely along the centre of the back of the legs. Crooked seams were looked upon as slovenly.

The most beautiful legs I ever saw

During the Second World War, I was a soldier in the Australian Imperial Force (AIF). Off South Africa, I was billeted with a couple whose daughter had the most beautiful legs I had ever seen and who clearly believed in the theory of "If you have it, flaunt it ".

Being outspoken I told her that I couldn't get over what beautiful legs she had, to which she replied, "Its not my legs that are beautiful, it's the nylon stockings that I'm wearing".

I replied that if nylon stockings could do that, then I would like some for my wife." So the woman offered to buy me some. I didn't ask where from! I ordered four pairs, which cost me eight pounds, and as I was earning 8 shillings a day that was 20 days pay.

My wife was probably the first woman in Australia to wear nylon stockings.

The only women who got to wear nylons during the war were the favoured few of an age and opportunity to get themselves friendly with American soldiers stationed in the UK.

Nylons came in a range of shades, and women seemed particular about choosing the right one. 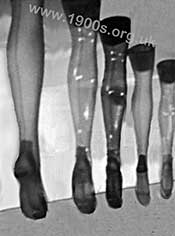 Nylon stocking as displayed by shops in the 1950s, edited screen shot from an old film.

There was also a range of thicknesses, described in terms of 'denier'. The two main ones were 15 denier and 30 denier. 15 was the finer of the two.

Shops made the choice easier by displaying the various shades and thicknesses on dummy legs in windows or on counters.

Understandably nylons were expensive as well as being extremely fragile.

When - not if - they caught on something, however tiny the tear, the fine knitting dropped its stitches into what were known as 'ladders'. Most high streets had shops of 'invisible menders' who, for a charge, would painstakingly pick up the stitches with gadget something like an miniature rug-making tool, using a powerful magnifying glass.

Later on, stockings were produced with a form of knot stitch that made snags go into holes rather than ladders.