Trousers braces and flies as common in the past

When trouser braces were standard menswear

Although I can't be sure of the range of dates when all men seemed to wear braces to keep up their trousers, I can say that men's trouser braces were entirely normal menswear while I was growing up in the 1940s. Even when younger men started wearing belts, older men continued to wear braces. My father was still wearing them until he died in the 1970s. I still see a few men wearing them today. 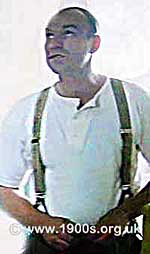 Two screen shots from an old film showing the front and back views of a man wearing braces to hold up his trousers.

How trouser braces kept trousers up

Mens trouser braces consisted of straps that went over each shoulder and buttoned onto the insides of trousers as shown in the photos. At that time, all trousers were sold with these buttons.

The straps of men's braces were elasticated which meant that they stretched to accommodate movement. Also they came in various sizes and could be adjusted to suit the height of the wearer with toothed clips that can clearly be seen in the photo of the boxed braces. So trouser braces must have been much more comfortable than belts, particularly for men with large stomachs - not that that was common in the war years and the years of austerity afterwards.

How men's flies did up, pre mid-20th Century

As I remember, men's flies were all button style before zip fasteners came into common use after World War Two.