Corsets, as once worn everyday by ordinary women

The corsets in the photo are just like the ones my mother wore every day as part of her underwear. They were not intended to be glamour items; they were functional to hold up stockings, there being no tights. They must have been intensely uncomfortable. 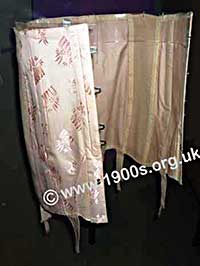 Corsets, worn everyday by ordinary women. Photographed in the Imperial War Museum. Note the suspenders at the bottom for holding up stockings.

Corsets had suspenders at the bottom edge for 'pairs' of stockings. Presumably because of the 'pair' of suspenders, corsets were often referred to as a 'pair of corsets'. So even though the garment in the photo looks like - and is - a single item, corsets were always referred to in the plural. That is a woman wore corsets not a corset. 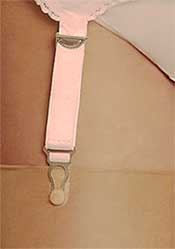 Suspender for holding up a stocking. There were four: one front and back for each leg. The clip at the top adjusted the length and the elastic suspension adjusted for leg movement.

My mother did say that corsets were good for keeping warm, but there must have been more comfortable ways to do that.

I suspect that women wore these corsets because, having been born in the early part of the 20th century, it was just something that they were expected to do. Certainly, in the 1940s and into the 1950s, they were readily available for purchase. Women didn't have to shop around for them - within of course the constraints of everything being in short supply during the Second World War and the years of austerity afterwards. When I was taken with my mother to buy her corsets, the shop assistant produced them immediately.

Sewn into what may look like vertical hems were what were known as 'stays'. These held the body into position.

The stays were thin strips of whalebone - genuine whalebone - which was strong and yet somewhat flexible. How flexible depended on the thickness of the stays. The stays came in various thicknesses and lengths to fit various types and sizes of corsets. They looked just like narrow strips of cream plastic.

Stays snapped on occasions, presumably when a woman bent down too vigorously or too often. Then new stays had to be sewn into the corsets. My knowledge of this comes from my Saturday job in a haberdashery shop in the mid-1950s while I was still at school.

Towards the end of my time at the shop, strips of what looked like interlaced wire started coming in to take the place of whalebone. They were slightly flexible and had thicker curved ends so that they would not hurt so much if they dug into a woman's flesh as she bent over. They were known as metal stays. 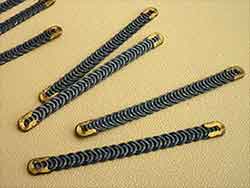 These corsets must have been incredibly uncomfortable: They were pulled tightly round the body, from above the waist to the top of the legs and were held tightly in place with heavy-weight metal hooks and eyes. The position of the waist is shown in the top photo by the horizontal shiny ribbon.

I can only imagine that if a woman wanted to bend down for any reason, possibly to pick something up, she had to take a deep breath first and be prepared for some significant effort to flex the stays.

My mother even did her housework in her corsets and she wore them in heatwaves because that is what 'nice' women of her age did.

Corsets were a sign of social class - or assumed social class and respectability. A strong corset forced an elegant style of movement, walk and getting out of chair.

As a child, I visited an old lady who was working in her garden. She had a special 'gardening' corset that had most of the bones taken out and was easier to move in. When someone suggested not wearing a corset at all, the horrified reply was "but what if the vicar came to visit me". The corset was a mystical symbol of respectability.

In the first part of the 20th century, kitchen maids were common. As they needed to move freely in their heavy work, they did not wear corsets - which reinforced the association between social class and corsets.

Betty who wishes to remain anonymous


The demise of corsets for everyday wear: roll-ons and suspender belts

In the 1940s and into the 1950s corsets were widely worn by women of my mother's age (ie. women born in the early 1900s). Then sometime in the 1950s 'roll-ons' or 'rollons' came in. They had no stays. They held women less rigidly, but did claim to control bulging stomachs. They were made of a strong rubbery fabric that had to be rolled up and then unrolled onto the body. My mother did buy me a roll-on when I was a teenager, but its tight elastic fabric chafed my thighs and I only wore it once. Like my other teenage friends, I used a suspender belt to hold up my stockings. This was a flimsy thing, effectively just suspenders attached to little more than a lightweight belt.

When did roll-ons first come on the market?

Rollons were in use in 1946 as my aunt mentions them in her 1946 diary. This was in Enfield, north London.

Comment from the webmaster: Interesting ... My mother was of course steeped in being old-fashioned, so wore her corsets as long as she could get away with it and, as I was too young to have a rollon in the 1940s, I assumed that they came in during the 1950s. I wonder if Nick's aunt's rollon was actually from before the war or produced as a utility item during the war.

Most of the images of corsets on the internet show ones that close by drawing laces together, pulling them tightly and tying them. These were not everyday items - at least not for underwear for working women in the mid-20th Century. For a start, the women would not have been able to spend the time putting them on every morning and there would have been no-one to help with pulling the laces tightly and doing them up.

Lace-up corsets were primarily for titillative external wear and were worn by actresses and show-girls in the mid-20th Century. Corsets in Victorian times was another matter, outside the scope of this website.