Enemas for constipation, early to mid 20th century and before

Constipation was fairly common when I was growing up in 1940s England. This was probably because the significance of fibre in the diet had not yet been recognised. A German once told me that constipation was known in Germany as the English Disease. He believed it was due to the English not eating the unrefined German black bread.

Enema kits and how they worked 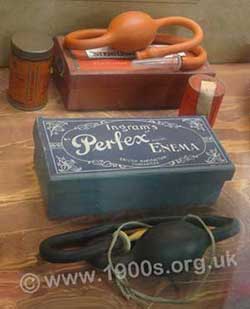 Essentially the enema kit consisted of a rubber tube with a bulb in it, which served as a pump control. There were various refinements such as the shapes or fittings at the ends of the tube and presumably some sort of valve system to ensure that the pump only pumped one way.

The procedure for using the enema kit involved putting warm soapy water into a bowl, putting one end of the enema tube into it and inserting the other end into the rectum - possibly lubricated with Vaseline, although I didn't notice this part. My memory tells me that towels or the like were placed over the individual's private parts, so I didn't really see much of what was happening - but I wasn't removed from the room.

Then the bulb in the enema tube was repeatedly squeezed to pump the warm soapy water into the bowel. During this operation, the individual receiving the enema lay on cloths of some sort on the large, farmhouse style kitchen table. Presumably then, with a full bowel, they felt the urge to go the lavatory, but I did not know at the time that this was the purpose of the activity, so I didn't notice it.

Laxatives or enemas as the preferred solution to constipation

There were various laxatives to relieve constipation, but I am reasonably sure that enemas were commonly used in families. I base this on the number of enema kits that have survived in museums and on my recollections of what happened when I was staying with a great aunt and uncle.

I must have been no more than a toddler when I saw them give each other enemas. That no effort was made to remove me from the room makes me conclude that enemas had been commonplace in their families in the early years of the 20th Century and probably before. (I never saw the practice again in later years, so either enemas went out of fashion or they were not spoken about in my prudish family.)

Once an enema kit had been acquired, enemas were effectively free to administer, unlike the various pills and liquids that could be bought from chemists. They may also have been pleasanter to use; I don't know. I do know that the available laxatives tasted horrible. I particularly remember syrup of figs which was regularly dished out to children.