I was a young child and teenager when the events and observations of these recollections occurred.

The most popular soft drink seemed to be Tizer, although there were others. They were sold in glass bottles and at the time of purchase a deposit was charged on the bottle. There was not a lot of spare money around. So we children would guard our empty bottles and collect any that were thrown away, until we had enough to buy a full bottle.

In the very harsh winter of 1947, crowds of people went ice-skating on the local pond. I am now confident that it must have been dangerous to commit the weight of so many people to pond ice, but apparently they got away with it. 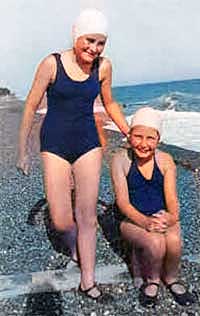 The only swimming costumes for girls that I ever knew were navy blue with a round neck. I'm not sure what they were made of - probably wool.

Girls always wore swimming hats - known as swimming caps - in swimming baths and at the seaside. I am not sure whether this was compulsory in swimming baths or whether it was to keep their hair dry. If the latter, they were singularly unsuccessful. They were made of fairly thick rubber, did up with a strap under the chin and were closely fitting with insets for ears. They did not stretch which was probably why they inevitably leaked. They did, though, keep dirty hair out of the water - and hair was not washed as often in those days.

The best time to have been born and grow up

I believe that I was extremely lucky to grow up in the 1940s and early 1950s. Life never felt hard, and children were provided with the best possible of advantages:

A few years earlier and my generation would have been required to risk their lives fighting; there would have been no NHS, no free grammar schools, and no grants for university. There was a period of turmoil after the war while things were settling down. So our education would surely have suffered.

A few years later, with the deterioration of grants, I doubt if my father would ever have afforded to send me to university. I have been very lucky and am all too aware that others were less so.