Old style funeral services were common while I was growing up in the early 1900s. Although cremation was formally legalised in Britain with the passing of the Cremation Act of 1902, it did not catch on quickly with ordinary people, particularly the older ones who were most likely to die first.

These old-style funerals were depressing affairs. You may think that funerals are today, but cremation has taken a lot of the sting out of them.

The first part of the funeral service - indoors

These old-style funeral services were in two parts. The first part was inside church and was quite short.

The second part of the funeral service - at the graveside 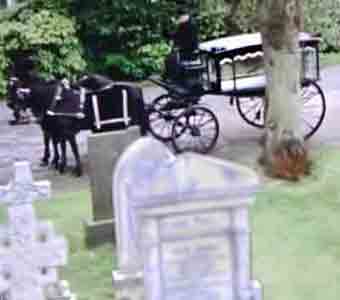 The empty hearse leaving the cemetery. Screen-shot from an old film.

Once the coffin was in place, but not yet covered up, the minister would conduct the second part of the service.

When he came to the part about "From dust to dust - from ashes to ashes", he would take a handful of earth and sprinkle it on the coffin.

It was very emotional - and it did not help that everybody was in black or wearing a black armband. Even handkerchiefs has black borders.

Implications of bad weather at the graveside

Whatever the weather, men were expected to stand bareheaded while at the graveside - and they often caught cold because so many deaths were in the depths of winter. Not infrequently the older men died. There was a saying that one death heralded another.

Thank you for cremation

So, with respect, people of my generation say thank you for cremation, although we did hear some gruesome tales when cremation first started to become fashionable - such as that when the coffin slid through the curtains and you saw the flames leap up. I suppose such exaggerated talk always comes with anything new.