When I was a child in the early 1900s, there were few speciality foods in the shops. So ordinary working class families had to make their own. Favourites were special pickles and mincemeat, specially preserved meats, and sweets. 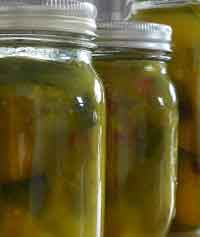 Some weeks in advance, my mother would cut up red cabbage and put it into jars of vinegar.

She would also pickle green walnuts by putting them into jars of vinegar. 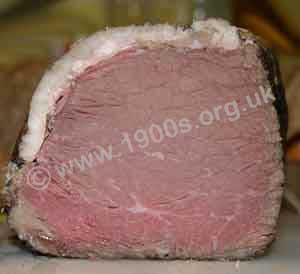 About a week before Christmas my mother would make salt beef ready for supper on Christmas night. This was a way of preserving the meat.

For the salt beef she would buy a piece of beef brisket and put it into brine for a few days, then cook it in water with a few pepper corns added for flavour. When cold she would press it into a tin, put a plate on top and then a weight.

To serve, it was turned out onto a plate and sliced. The slices looked pinker and paler than roast beef slices, but it was tender and pleasant to eat.

Also about a week before Christmas my mother would make brawn - which was preserved lumps of cold meat set in jelly. 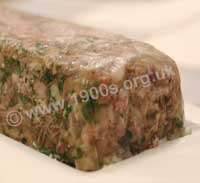 She would buy half a pig's head and trotters and a leg of beef and boil them all together in a little water. When they were cooked, she would cut them up into pieces and put them into a large basin with some of the water. All this set solid when cold. I don't think gelatine was used. The meat juices themselves produced the jelly.

To serve, the brawn was turned out onto a plate and cut into thick slices or wedges. The portions had to be thick because the lumps of meat came out whole. 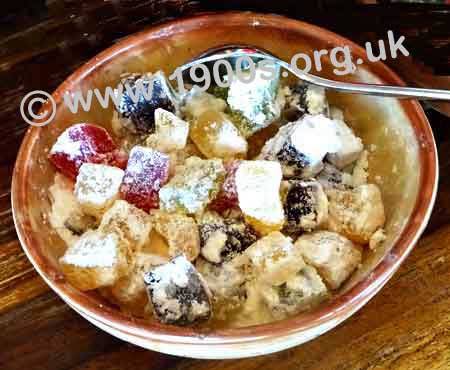 My father always made coconut Turkish delight for Christmas, but I don't know how he did it or whether it was usual practice for the man of the house to make the sweets.