In my childhood in the early 1900s there was a big build-up to Christmas with all the preparations. However Christmas itself began for us children on Christmas Eve.

There was so much hub­bub and bustle around! The shops would be open as late as 11 o'clock to handle last minute purchases.

The butchers, in particular, would shout out about the reduced prices of their poultry. As there were no fridges, the butchers were understandably anxious to sell their meat off before it got high and started smelling.

Butchers trying to sell off their meat by Christmas Eve before it went bad. Tap/click for a larger image. 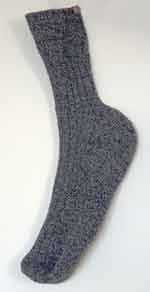 We children hung up our stockings at the end of the bed and I, for one, really believed that Father Christmas himself would come to put things into it. We believed what we told in those days.

The Christmas stocking was of course not a stocking. Our parents wouldn't have been able to afford to fill one. It was one of our father's woollen socks.