It was customary for the family of a dead person to close their venetian blinds. Close neighbours normally did the same, and on the day of the funeral the whole road would close theirs. So the road looked very sombre. 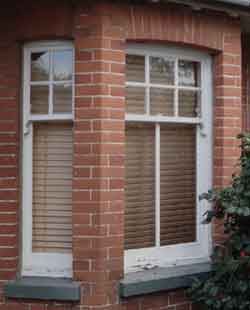 Venetian blinds - closed all along the road, out of respect

The tolling of the church bell

Just before the funeral procession set off, the church bell started to toll. As there was no traffic noise to speak of, it really added to the sombreness of the occasion.

The coffin was taken out of the house on what was called a funeral bier. This was a stand of a size and shape to take a coffin, with straps to secure the coffin. 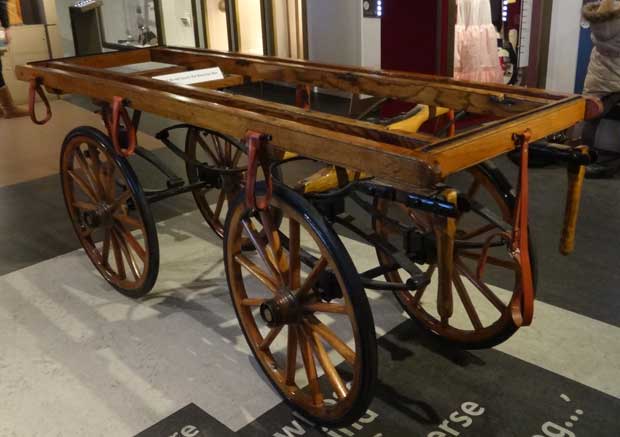 Victorian or Edwardian funeral bier photographed in The Lightbox, Woking. 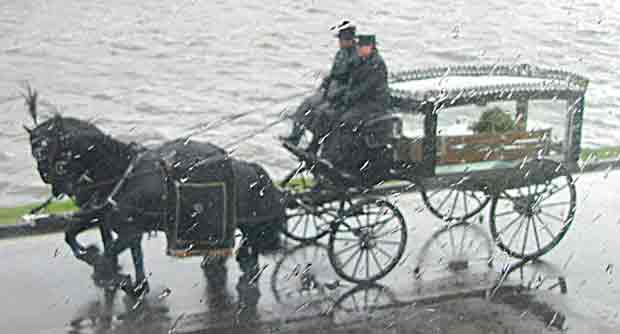 Victorian or Edwardian hearse, transporting a coffin on its final journey. Photo courtesy of Rosemary Hampton. Although taken through glass on a rainy day, it is accurate in all its details.

Sometimes there were wheels to transport the bier, although it was often considered more elegant for it to be carried out slowly by what were known as pallbearers. There was an arrangement on the bier whereby the coffin could easily and elegantly be slid on and off it.

The coffin was then slid from the bier into a waiting hearse which was a horse-drawn carriage with glass sides which showed the coffin through. It was always black and elegantly and tastefully decorated.

As the hearse left the house, the undertaker and his men took off their top hats. They then walked behind the carriages at a dignified pace to the end of the road. Then they would take their seats and the horses would be allowed to break into a trot.

The form and style of the procession 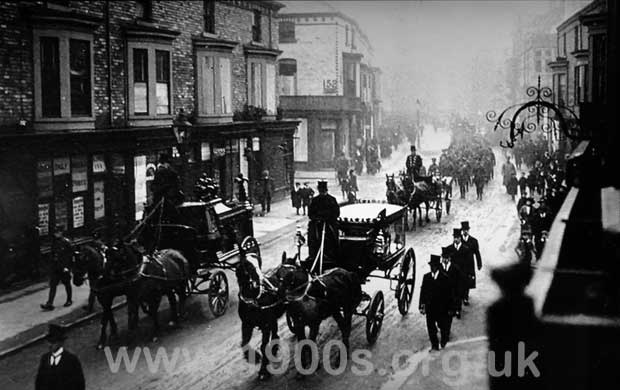 The other horse-drawn carriages followed behind the hearse, with the closest family heading them. These carriages held four to six people.

There was quite a bit of pomp with some funerals. The horses would have black velvet covers on their backs, similar to those worn by racehorses. Then over their ears they had black plumes about 6 inches long [about 150 mm] which bobbed up and down as they trotted along.

I recall seeing one funeral when I was a child and telling my parents that I had seen a jockey riding with them. I was corrected and told it was a postilion. He was certainly dressed like a jockey with a close fitting outfit and a jockey-like cap with lots of braid on his jacket.

An undertaker's recollection of an Edwardian funeral

When old Francis died in 1913, Dad sent him off in a hearse pulled by four black horses followed by mutes* carrying ostrich feather wands and a procession of friends and family in the deepest mourning possible. You used to see so many flowers at funerals before the Great War. But, then, and what seemed like years afterwards, there were so many dead there weren't enough flowers in the world for all of them.

* A mute's job was to stand vigil outside the door of the deceased, then accompany the coffin, wearing dark clothes, looking solemn and often carrying a wand of some sort.