The family background of the author of the early 1900s pages

This page sets the scene for the early 1900s recollections by outlining the family in which the author, my mother, grew up. 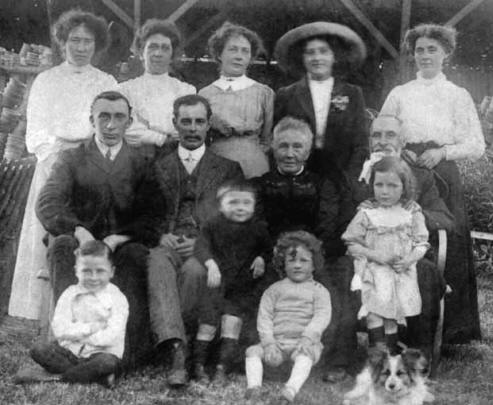 My mother's family. She is front right; her brother Jim is front left; her brother Ted is front centre; her mother is back right and her father is middle left. The others are members of the wider family: grandparents, great grandmother, aunts and a cousin.

She was born Florence Edith Cole on January 27th 1906 to parents Herbert James Claud Cole and Florence Maria Cole (born Bartlett). Both parents were born in the 1880s but just missed the 1881 census with birth dates of 30 July 1881 and 11 September 1882 respectively. They married on 19 September 1904. What is significant on this site is how typical the family was so that you can draw inferences about the lives of your own ancestors.

My mother was one of four children - although in a typical family there would probably have been more. (My grandfather's poor health was probably the cause.) She had two brothers, Ted and Jim, and one sister, Dorothy, who died as a baby - an unfortunately fairly common occurrence in many families of the time. The three surviving children grew up at 116 Lopen Road, Edmonton, which is now Enfield.

My mother's recollections of her childhood would have been typical of the recollections of other children on similar estates. That is where the interest in this website may lie for you. She attended Silver Street School in Edmonton until she was 14 years old. She spent numerous weekends and school holidays with her more affluent Cole grandparents in their large house at the Cole Pottery about a mile away in Tottenham and she clearly recognised the stark contrast between the standards of living there and at home. She wrote her reminiscences in the 1980s and left me seven substantial volumes filled with closely packed, spidery writing which I am still transcribing. As I do so, I am continually amazed at her powers of observation, the detail of her memory and her dedication to documenting life as she saw it.

All text and images are copyright - see Copyright issues.