In the mid-20th Century, tape recorders were the only way to record and play music and speech. There were two types. The first was known as a reel-to-reel tape player/recorder and the later one a cassette recorder/player. They worked with magnetic tape.

When I first knew my husband in the 1950s, he had the reel-to-reel type. I knew who had such a thing. He had built it himself from parts which were available in specialist electronics shops which grew out of war surplus shops. The cassette type was not yet on the market.

In my student days in the 1950s, I made a reel-to-reel tape recorder/player that I used for music. It was a large and bulky thing.

The system had to have a separate amplifier which was no problem as I was a frequent visitor to Tottenham Court and Edgware Roads in London where there were shops which were full of cheap 'war surplus' equipment as well as the latest electronics devices.

Fortunately I was well into working with wood, so I constructed a smart piece of furniture for it which stood on legs with two lids, one for the reel to reel recorder and the other the amplifier and its controls. I made separate boxes for the loudspeakers and bought cheap loudspeaker units to mount inside. It all looked quite impressive and I must say produced excellent music. However, it took up a lot of space and rather dominated the room and was most certainly not portable.


The appearance of reel-to-reel tape recorders 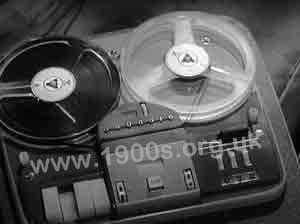 Early reel-to-reel tape recorder/player - a bulky thing, very like the one in the photo, a screen shot from an old film.

How the reel-to-reel tape recorder was used

In use, a full reel of tape on one side of the machine wound onto an empty reel on the other side. Before re-use, it had to be re-wound.

For recording, a reel-to-reel tape recorder was used either with a separate large microphone to record people singing, what they were saying or music straight from a radio. Playback normally required a separate speaker which was also bulky.

Blank tapes were available for purchase, but I am reasonably certain that there were no music tapes on sale anywhere. These tapes were bulky and sold open on their reels with no protection other than the reel itself, as shown in the above picture.

The tension of the tapes had to be just right. If it wasn't, the tape tied itself up in knots or broke. 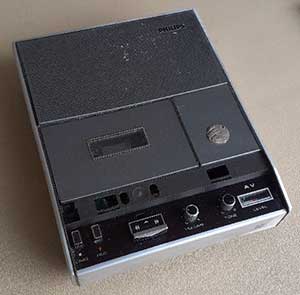 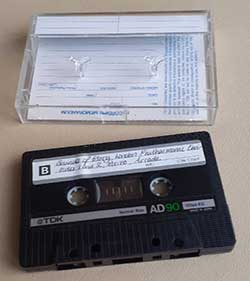 
The convenience of the portable cassette tape recorder

In 1962 Philips announced the development of the first compact cassette recorder which was battery-powered. I bought mine at a shop in Tottenham Court Road and can remember marvelling that I could walk around and record whatever I liked where ever I was without trailing leads. It is difficult to describe the exhilaration of not being tied to one place and the freedom of just pressing the button to record or play. I had only been able to use my old reel-to-real recorder in my room with a separate plug-in microphone and the usual mains leads for power.

Blank cassette tapes were widely available for purchases and pre-recorded music ones also appeared. They had the advantage over the earlier reel-to-reel tapes of coming in their own protective boxes, but they were subject to the same problems of breaking and twisting easily. My family wrote our first book on these tapes. By today's standards they took ages to record and the only way to back up was onto a similar tape. We had fingers crossed throughout the recording and backing up process in case our work would be lost through broken tapes.