Computer graphics, if they existed, was still in their infancy. So the television weather forecasters showed the expected weather with pieces of felt shaped and coloured to indicate rain, sun, cloud etc and they moved these around over a felt background. Felt sticks loosely to felt, so can be moved around easily. Actually it is possible that these were magnetic not felt, bu I have been assured by people older than me that they were felt. 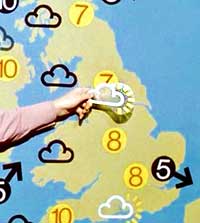 Felt or magnetic weather display board, with a person moving the cloud and rain shape to where on the map it was forecast

Felt graphics were common, particularly in infant schools. In motherhood classes when I was expecting my first baby, I was taught what food was good for me from a nurse who stuck coloured pieces of felt onto a felt background. The shapes and colours represented fish, butter, milk, cheese, vegetables etc. I felt patronised.

White tooth fillings started to appear. Even as late as the 1960s, it was still not unusual to see people with one or more gold teeth. These individuals had had their dentistry work done before suitable man-made materials had been developed. Back teeth which didn't normally show were filled with the standard mercury amalgam which was black, but front teeth were filled with gold. Gold does not tarnish or react with any other substance, so in some ways it was very suitable. However, gold is soft, so its use in dentistry must have been limited. Gold is and was also expensive.

A gold tooth was not a decoration or jewellery, it was functional, but it was also a status symbol because ordinary people either couldn't or wouldn't afford it. Instead, their bad teeth were simple pulled out, and it was quite normal to see people with gaps in their teeth where one or more teeth were missing.

I can't remember when I last saw anyone with a gold tooth, probably due to improvements in dentistry and the free NHS.

The ultimate wedding present in the 1960s was a Kenwood Chef food mixer. 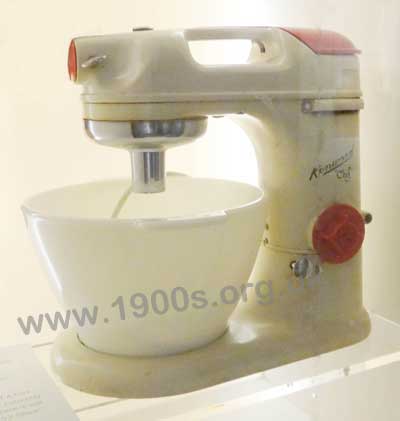 The Kenwood Chef came on the market in the 1950s and I was offered one as a wedding present by my mother-in-law. The idea was that it was going to save me a great deal of time and effort in my new domestic role. She had one herself and thought it was wonderful. In practice, though, I made it clear that I would prefer a smaller hand mixer because it of the storage bulk of the Kenwood. In the end, I had to buy the hand mixer myself, which I have never regretted.