The reception class, classroom and playground

The first class in 1944 was known as 'The Babies', and my teacher was Miss Reebold. That was how her name sounded, but I have no idea of the spelling.

Although the main playground was at the front of the school, we 'babies' had our own small grey stone-walled playground leading off our classroom. I always thought how neat and friendly it looked.

The classroom furniture was tables and small chairs. 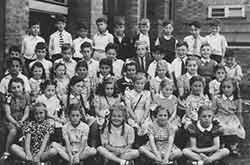 My class at Edgware Primary School. I can't remember the year, but the children look about six.

I never knew how to spell my classmates' names, and their names here are as they sounded to me. Left to right, where I can remember:

All the classrooms after the Reception year were simple large rooms, and the furniture was identical to what my mother described for the early 1900s classroom: a wooden high desk and chair for the teacher, a wooden-framed blackboard on an easel and two-seater desks for us children. (The term 'chalkboard' was effectively unheard of.) There were no tiers: all the classrooms were flat.

The head teacher was Mr Bird.

Miss Weinstock was my first teacher at Edgware Primary School and I always remember her kindness when Mr Bird summoned her to come and collect this very frightened little girl on her first day there, and how she held my hand all the way to the classroom and was kindness itself in helping me settle in to a new situation.

A teacher's fondness for punishment

My one recollection of Mr Dashfield was his caning of four or five boys from a higher year group in front of our class. Perhaps he was standing in for our teacher. Subsequent to the punishment, one of the lads he caned stated that he had been innocent of whatever it was the lads were charged with. Mr Dashfield retorted that he should have said that earlier!

Once the war was over, Britain was gripped in even worse austerity, particularly with food shortages. My class teacher was a Mrs Harmer, and I used to wonder why certain children in my class were so obviously her favourites, as I couldn't see any difference between them and me or anyone else.

Only later did I realise the significance of their parents being managers of food shops. There was always extra food 'under the counter' for those who storekeepers wanted to ingratiate themselves with - like their child's teacher, and of course the teacher had to show that she really was being extra specially caring to the child.

Checks on children absent from school

When a child was ill and off school, it was often for quite some time because the childhood illnesses like measles, mumps and whooping cough were rampant. As few households were on the phone, schools were seldom told why a child was absent.

To address this problem, there was a man - I don't know what he was called - who visited homes to document why children were absent. Our man was of indeterminate age and was probably in a reserved occupation. All I remember is that he seemed to spend his time with us, sitting round our kitchen table, probably drinking tea, and just complaining about the difficulties of the war.