In July 1938 my parents married and set up home 9 Brook Avenue, Edgware, Middlesex on the northern edge of London's suburbia. My father had bought the house in the previous April.

Black and white lino tiles, which seemed to be on the floor of every bathroom of houses built in the 1930s. Photographed in The Imperial War Museum.

Tap/click for a larger picture. 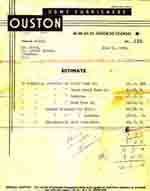 Tap/click for a larger, legible version or see the following transcription.


Remarkably, some of their documents from that time have survived, and provide tantalising insights into the prices of household items at the time. They are also a resource for calculating rates of inflation between then and now.

Essentially these prices are pre-war, ie before the onset of World War Two. Although some of the items were purchased afterwards, the real impact of the war was yet to hit.

The estimates and receipts for lino floor covering

The first surviving document from the household accounts is dated 11th June 1938, the month before my parents were married. The address which my father gave was still his old one in Edmonton, but he used a local Edgware supplier. The estimate was for floor coverings.

All the invoices, bills and receipts show the phone numbers of the suppliers with the old-style first three letters of the area as the area code.

I used lino in art classes at school and clearly remember its canvas backing. We children were give a square of it about 20cm by 20cm and a knife to cut out a pattern or picture in its front surface. Then we either rolled or painted ink onto it and pressed the lino onto paper. This put the picture onto the paper in relief, with the uncut surfaces colouring the paper. We could use our linocut quite a number of times to repeat our pattern or picture. The trick was to cut into the lino just the right amount: too far and the lino lost its strength and not far enough and the resulting picture had untidy edges.

All the floor coverings were linoleum - or lino as it was called. My mother always referred to it as oilcloth - a heavy duty cloth treated to create a wipe-over surface, which would have been the norm in the Victorian terraces where she grew up. I understand that oilcloth and lino were very similar.

The June 1938 estimate documented the following prices for lino in the stated rooms:

Note that the estimate actually included a halfpenny, just less than 1/500th of a pound. Perhaps this illustrates the enormity of inflation over the years more than anything else. 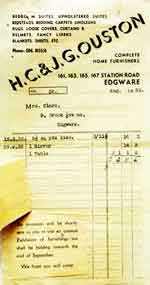 Receipt for floor covering, a table and a mirror. Tap/click for a larger, legible version

Somewhat surprisingly the lino for the downstairs front room was not included. However, there is a receipt, dated August 1938 for more lino, a mirror and a table. Significantly this gives the price of the lino per square yard, 2/11½, ie not quite three shillings.

The table must have been our extending dining room table, as a later document shows the purchase of the kitchen table. There was also a matching sideboard but no receipt documenting its purchase has survived.

The supplier was the local Ouston shop and my father's address was now given as his Edgware one.

There is no record for the bathroom and lavatory floors. These were black and white lino tiles which were probably fitted when the house was built as everyone seemed to have the same in their bathrooms and lavatories. There were also matching black and white ceramic wall tiles.

Apart from the position of the window and the colour of the top halves of the walls, the above photo on could have been of my parents' bathroom. Its walls were all white.

Vinyl floor coverings were years in the future, and no ordinary families had fitted carpets, although I do remember small rectangular mats in the hall, just outside the doorways to the living rooms, presumably against draughts. There were also various other rugs, but there is no record of their purchase, and they were probably bought later or inherited.