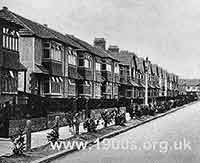 Typical row of 1930s-built semi-detached suburban houses photographed in the 1930s, courtesy of Barry Hooper. Tap/click for a larger image.

In the years just before the Second World War, there was a boom in new housing estates in the UK. It was on the outskirts of towns and cities and in a fairly uniform style. It created what became known as 'the suburbs' or 'suburban housing', ie road upon road of rows of houses which were identical on any one estate, apart of course from minor titivations made by the occupiers.

Then in 1939 came the Second World War or World War Two as it is also called. All the country's resources went into fighting the war and no house-building of any significance took place. After the war there were years of austerity with no significant house-building. It did not start again until around the 1960s, but the style was rather different, although semi-detached i.e. two mirror-image houses together in one block) was still dominant.

So an up-to-date 1940s suburban house was essentially a 1930s one - albeit adapted to meet the needs of the war with windows taped against bomb blast, blackout material, etc., all of which are considered elsewhere on this site. Of course many families were still living outside the 1930s suburbia, in older houses, for example in Victorian terraces and in even earlier accommodation.

Similarly there were no such thing as up-to-date 1940s furnishings because the shops could not get stock to sell during the war or in the years of austerity afterwards.

My parents were married in 1938. Their house in the suburbs of north London was one of the 1930s suburban houses in the London suburbs, and its furnishings were either bought shortly after they married or in the first few months of the war when shops still had 1930s stock; or they were hand-me-downs.

I was born in 1939, the year that war broke out and I grew up in their 1930s suburban house, adapted to react to the shortages, austerity and bombs of the 1940s and the continuing shortages and austerity early 1950s. My childhood recollections of my parents', friends and relatives' houses form the basis of the pages in this section of the website.