Cigarettes were not rationed during World War Two, presumably to keep up morale, and numerous brands were available - at least in theory. In practice the shortages and austerity of the war years and the years afterwards meant that specific brands did not always find their way to tobacconists or cigarette vending machines. As often as not shops were completely out of stock of cigarettes or kept them 'under the counter' for regular customers only. 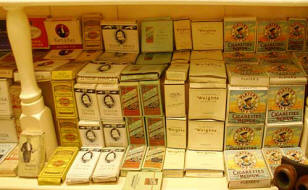 My main recollections come from after the war, when my father was back at home. He smoked Players Navy cut which was a common brand, but there were quite a number of other brands, all well-advertised and popular. The above photo gives a good indication of the range.

Cigarette manufacturers used to put attractive and informative cards into their cigarette packs to encourage people to buy their particular brand. See here and here for examples of cigarette cards.

These cigarette cards were common before the war, but were discontinued during the war to conserve resources. As I was born in the first year of the war, I never saw them in sales, although there were plenty of them around in peoples' private collections. After the war, they never really took off, although I understand that some cigarette brands produced a few to mark special events like the 1951 Festival of Britain.

Children could be kept amused for hours with used cigarette packets, scissors and glue. New toys were hard to come by in wartime and all sorts of interesting things could be made with the highly-coloured and decorative packets.

My father taught me how to make bookmarks from the Players packets. Today, this may seem a rather trivial and pointless thing to do, but remember that in wartime designer bookmarks were not available and slips of paper too easily fell out of books. Anyway, making a bookmark was a novelty for a child.

We just had to cut round the outside of the life-belt picture and most of the way round its inside. This made a flap which slipped over a page and did not get knocked off or slip out. More recently I have made such bookmarks from cereal packs, which are made of the same thickness of card, but the pictures are nowhere near as pleasing and not really the best size.

Front of a packet of Players Navy Cut cigarettes 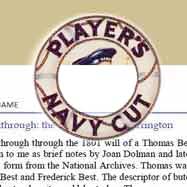